Carvana's car vending machine might seem inefficient and look gimmicky, but here's why it's so important for the company and its investors.

The above quote is the simple premise behind Carvana's (CVNA 29.50%) mission to disrupt the traditional used-car-buying process with its leading e-commerce platform. Carvana has picked an industry begging to be disrupted; 81% of consumers don't enjoy the car-buying process and the largest dealer brand accounts for only 1.8% of U.S. market share.

In other words, Carvana needs to differentiate itself in a highly fragmented market begging for a better, more consumer-friendly process. The good news for investors? Carvana's unique car vending machine can help do just that, and here's why it's more than just a gimmick.

Let's use Carvana's most recently launched vending machine as an example. After the consumer has shopped the list of vehicles online and made a purchase decision, they can then schedule an as-soon-as-next-day car vending machine experience or a home delivery. In Indianapolis, the vending-machine option means heading to the seven-story high glass building holding up to 26 vehicles. Upon arrival, consumers are given an oversized coin to be inserted in the receptacle to vend their purchased vehicle. 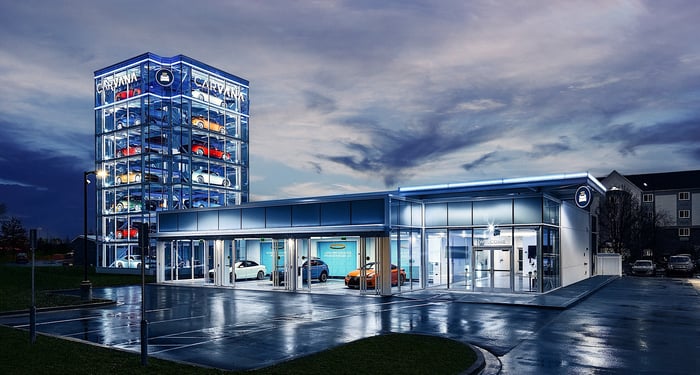 Is it just a gimmick?

Investors should take note, however, that Carvana's car vending machine is more than a gimmick. One reason the vending machine isn't a gimmick is because it has a very important task: to attract a generation of millennial consumers who have grown up sharing unique experiences through social media. Would you rather spend hours at a traditional dealership haggling over used car prices, options, and financing or would you rather take care of those hassles in a faster way online and then watch your car work its way through a seven-story vending machine? For many millennials, and any consumer who despises the traditional vehicle-buying method, the answer could be Carvana's car vending machine.

At Carvana's core, its business is built on making the buying process faster, easier, and less painful than the traditional dealership process. But its vending machines are no gimmick and are critical for the company to stand out in a fractured industry as millennials share the unique vending machine experience on social media, increasing brand awareness and accelerating market penetration.

In fact, looking at a previously opened vending machine in Nashville, Carvana's market penetration more than doubled within two quarters after the machine launch. The e-commerce platform, home delivery, or vending machine pickup has registered thus far with consumers rating Carvana.com 4.7 stars out of 5.0 stars through June 11, 2018, with 95% willing to recommend the experience to a friend. Investors would struggle to find another auto retailer scoring that well with consumers, and that's incredibly promising for Carvana's future.

There's little doubt that the marketing, advertising, and more enjoyable consumer experience provided by the vending machine is important for a young company looking to rapidly expand its market share. The question then becomes, at what cost?

Carvana has a great repeatable market-entry playbook that has enabled the company to open 40 markets during 2018 compared to only 23 openings in 2017. This has pushed the company's total markets to 85. The most recent vending-machine launch in Indianapolis marks the company's 15th machine launch. Here's the difference in cost between Carvana's two market-entry strategies: Market launch capital expenditures for a delivery-only program costs $500,000 while the cost for a vending-machine launch averages $5 million.

That's a large discrepancy in the cost to open two different market opportunities for Carvana, but overall, it's proven effective. Consider that Carvana just logged its 19th consecutive quarter of triple-digit unit and revenue growth and almost certainly will post its 20th consecutive quarter when fourth-quarter results are released. Here's another way of looking at its recent sales figures: Carvana tallied more retail sales in the third quarter than all of 2015 and 2016 combined.

Here's what it all boils down to for investors: How can Carvana grow to dominate the highly fractured used-car retail industry? The answer is that it needs to differentiate itself, which is incredibly difficult in the automotive retail industry. That's why the unique vending-machine option is critical for the company's future market share. Let's take it one step further and show just how fractured the automotive industry is compared to other retail verticals and market-share leaders. 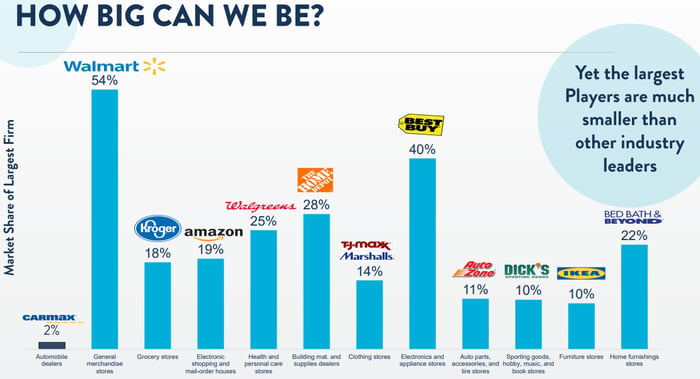 If you're asking yourself how large Carvana could be, there's plenty of potential growth. Carvana took the market share data in the graphic above and took it one step further using the market share of the top four players in the five largest retail verticals, excluding electronic shopping and mail-order houses.

In other words, if market leaders in the fractured automotive retail grew market share to similar sizes of other markets, that would put the largest player at 12 million used car sales annually. The second, third, and fourth largest players would sell 7 million, 3 million, and 2 million units, respectively.

For context, Carvana's full-year retail unit sales guidance is between 93,858 units to 96,358 units -- which already will be year-over-year growth of between 112% and 118%. Will any auto retailer increase its market share to that degree? Probably not. But it does show you there is plenty of room for growth, acquisitions and consolidation.

Differentiation in auto retail is difficult, and if players such as Carvana ever are going to increase their market share to levels of similar retail verticals, they're going to have to stand out and attract new consumers. Here's one more market fragmentation statistic to chew on: In the $764 billion U.S. used-car sales market, the top 100 dealerships accounted for a meager 7% of sales.

Gaining that market share is not going to be easy or cheap, but it's there for the taking in an industry begging for disruption. The car vending-machine option that Carvana has delivered is a huge step ahead of its competitors' traditional dealership method. That's exactly why Carvana's vending machine is so much more than a gimmick.

Is Carvana Repairable, or Headed to the Junkyard?

Bull vs. Bear: Who Wins With Carvana?

Down 93% This Year, Is Carvana Finally a Buy Now?

Are the Carvana Shorts in Danger of Being Crushed?
357%