Please ensure Javascript is enabled for purposes of website accessibility
Log In Help Join The Motley Fool
Free Article Join Over 1 Million Premium Members And Get More In-Depth Stock Guidance and Research
By Daniel B. Kline - Apr 4, 2019 at 7:17AM

But there are some red flags being thrown up.

The stock market may be especially volatile due to the current political climate, but the majority of small business owners (SBOs) aren't worried. In fact, 66% of SBOs say that recent fluctuations in the stock market have not changed their business outlook, according to the new Small Business Growth Index from Capital One (COF -5.00%).

That doesn't mean the economy does not hold many concerns for SBOs. Nearly half (49%) are worried that a recession could hurt their business over the next year, according to the twice-yearly survey of 500 small business owners. The report tracks sentiment related to the economy, business conditions, and plans for growth.

"Small business owners remain cautiously optimistic," Jenn Flynn, head of Small Business Bank at Capital One, said in a press release. "While we saw a slight dip in optimism compared to Fall 2018, small business owners are still making strategic investments in their businesses, while paying close attention to the uncertainty in the stock market and evaluating the potential impact of a recession." 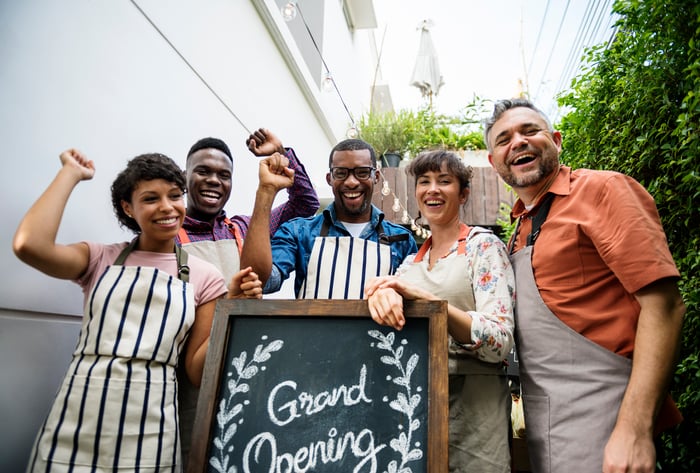 Most small business owners remain optimistic, but overall optimism has fallen, according to a recent survey. Image source: Getty Images.

Small business owners may not be all that worried about the economy or the stock market, but many are taking steps just in case. Nearly half (49%) are being more conservative than usual with inventory and/or supply management, while 36% are planning for a decrease in sales.

In addition, 34% said they believe stock market volatility may affect their ability to expand their business this year. And 27% believe that economic conditions may keep them from adding any staff.

Overall optimism has fallen. Only 59% of SBOs expressed optimism about the coming year in the current report, down from 67% in October.

Some of that pessimism may come from the strength of the current economy, which is making hiring a challenge. Only 29% of SBOs said they plan to add staff in the next six months (down from 33% in October). Of those choosing not to add staff, 29% said "they would like to but are nervous to take on the added expense due to economic conditions." Another 28% said they cannot find the right talent, and 24% say they don't have the financial resources.

The labor market has made hiring expensive. Over three-quarters of SBOs (76%) planning to add employees in the next six months said "they are providing industry-leading or competitive salaries." Almost half (47%) have started offering more benefits, and 43% have made an effort to market their company as a "great place to work."

It's about being flexible

The economy, the stock market, the labor markets, and consumer demands are moving targets. That makes it somewhat disturbing that only 23% of SBOs surveyed said they "feel pressure to change aspects of their business, like customer experience, based on industry innovation driven by large companies like Amazon."

Your business may not need to do everything the big boys do, but you should remain aware of customer expectations. Consumers may be fine with a small business offering slow delivery or not having gift cards -- until they aren't fine with it, and then they can leave abruptly

"Change is a constant for small business owners, and it's encouraging to see leaders remain resilient as they interpret new things like tax reform and the impact of technology," said Brad Jiulianti, head of Small Business Card at Capital One, in the press release.

It's not that SBOs have to follow, but they do need to monitor what their customers expect. That requires asking a lot of questions and making sure you invest in the areas that consumers demand, while staying away from ones that aren't as important to your customer base.