Please ensure Javascript is enabled for purposes of website accessibility
Log In Help Join The Motley Fool
Free Article Join Over 1 Million Premium Members And Get More In-Depth Stock Guidance and Research
By Reuben Gregg Brewer - Updated May 23, 2018 at 9:55PM

The major industrial players offer a mixed picture of the economy, but the positives appear to outweigh the negatives.

The world economy is a vast and amorphous entity that can be hard to read and even more difficult to predict. However, you can get something of a checkup on the global economy by taking a look at industrial giants like General Electric Company (GE -2.56%), Siemens (SIEGY -2.25%), Eaton Corporation plc (ETN -1.92%), Honeywell International Inc. (HON -1.68%), and ABB Ltd (ABB 0.17%). Here's what recent results at these industrial giants are telling us about the global economy.

When you take a look at the most recent quarterly results from these five industrial companies, the immediate takeaway is that things are going generally well. This is a global picture, too, since the operations of all of these companies span the world. Here are some key highlights. 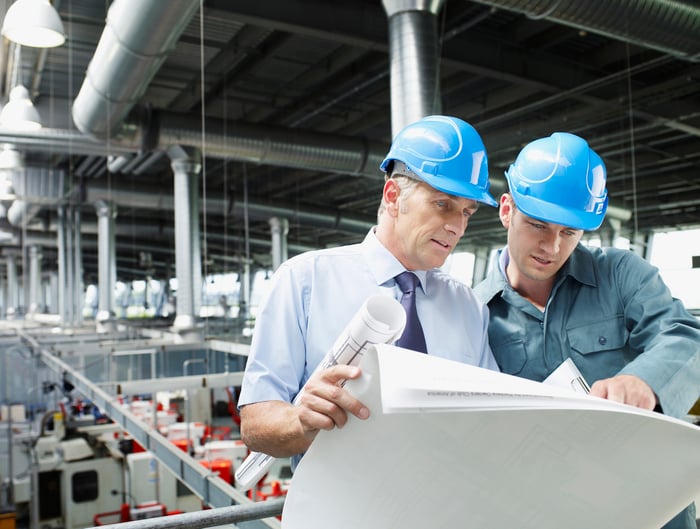 Big equipment is back. One of Eaton's most troubled divisions in recent years was its hydraulic group. After the housing downturn following the 2007 to 2009 recession and commodity crash in 2011, orders for earth-moving and construction equipment dried up. However, in 2017 orders in Eaton's hydraulic division, which counts both sectors as key end customers, began to rebound. In the first quarter of 2018, organic sales advanced 16%. Big equipment and the industries that rely on it appear to be doing quite well right now.

Renewable power is holding up well. General Electric's first-quarter results, meanwhile, included robust 21% order growth in renewable energy equipment. The company noted pricing pressures, but clearly demand is still strong. And while a 10% drop in services orders in this division is notable, scale is an important issue to consider. Equipment orders were $3.1 billion in the quarter, while service orders were $300 million. Renewable power is clearly still doing pretty well.

Emerging markets are showing strength. ABB's first-quarter results indicated notable strength in its Asia, Middle East, and Africa division, where orders were up 12%. That compares to order growth of 1% in the Americas (North, Central, and South America combined) and 2% in Europe. Although it didn't break any numbers out, Honeywell made specific note of order strength in Asia and Africa within its safety and productivity solutions division. And General Electric highlighted emerging market strength within its healthcare division. All told, it looks like emerging markets are doing well and investing for the future. 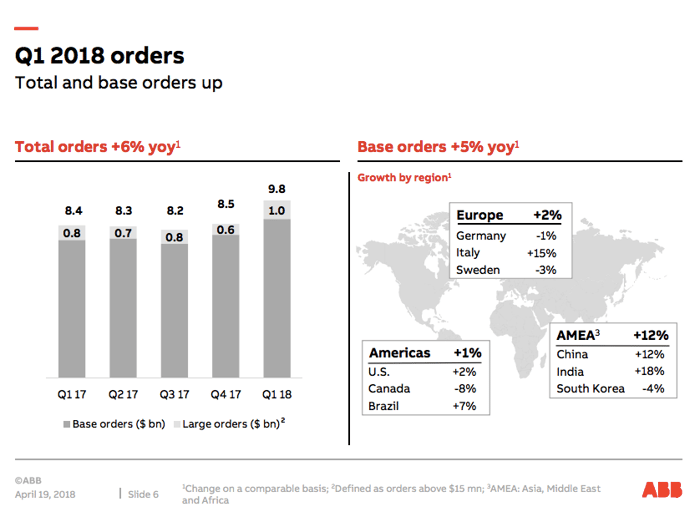 Vehicles riding high. Both General Electric and Eaton noted strong results in their vehicle divisions. GE's transportation group orders were up 34% on the equipment side and 58% on the services end. Eaton's vehicle segment sales were up 14%. This can be a pretty volatile area, but right now it appears that vehicles are doing pretty well.

A couple of notable downers

Results at these industrial giants, however, were not strong across every company and division. Indeed, there were a couple of notable drags.

Power plants are wilting. General Electric's power division, which makes things like turbines, saw orders tumble a huge 40% year over year. Service orders in this segment fell 19%. This wasn't unique to GE, either. Siemens saw orders drop 7% during the fiscal second quarter in its power and gas division. This weakness isn't too surprising, however, based on the strength of the renewable power segment noted above. In fact, GE highlighted a mixture of energy efficiency and renewables growth as a notable headwind for the turbines it sells, which are generally powered by fossil fuels. 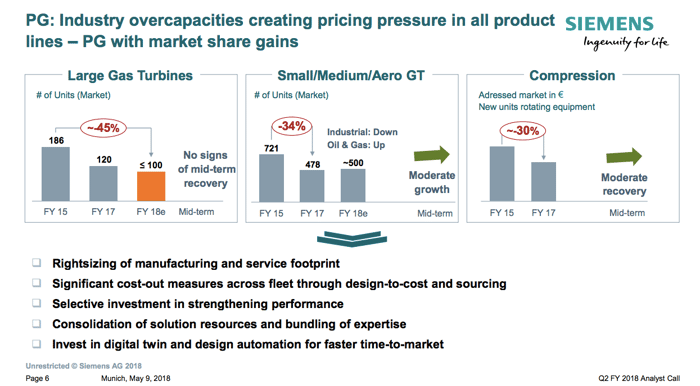 Turning the lights off. Another area that was under pressure in the first quarter was lighting. GE's tiny lighting business saw orders drop 7%. Service orders in this division were down 71%. And while Eaton doesn't break its lighting operations out as a separate division, weakness in this segment was a notable topic during the company's conference call. CEO Craig Arnold explained that sales were down 10% in lighting and that Eaton had chosen not to participate in some large projects because of weak pricing. Eaton is expecting lighting sales to fall mid-single digits in 2018.

All told, the results of some of the largest industrial companies in the world suggest that the global economy is doing OK, with the positives easily outweighing the negatives. That said, GE's and Siemens' results were notably weighed down by the weakness in the power turbine market, which is a significant contributor to each company's business. Overall, however, it was still a good start to the year for industrials and the vast majority of the end markets they serve. If you have been looking at the industrial space for investment ideas, first-quarter results provide ample support for an investment in the sector.