By now, most investors in General Electric Company (NYSE:GE) know that the company's first-quarter earnings came in ahead of expectations, and management maintained guidance for the full year. From a headline perspective, it's good news, and the stock rose in sympathy. However, it was actually a far more mixed report than the headline suggests. Here's what you need to know about GE's first-quarter earnings presentation. 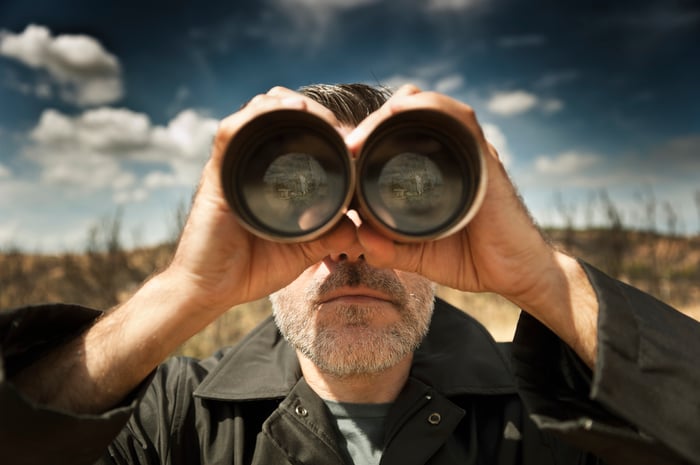 To recap, GE reported adjusted non-GAAP earnings of $0.16 compared to consensus analyst estimates of $0.12. In addition, GE maintained its full-year 2018 guidance for adjusted EPS of $1 to $1.07, and adjusted industrial free cash flow (FCF) of $6 billion to $7 billion. That's good news because there had been some negative sentiment on earnings going into the report -- analyst consensus for full-year adjusted EPS is still $0.96.

But as I suggested above, the earnings presentations contained as many negatives as positives. I'll start with the former:

Developing the first of these points, it's reasonable to conclude that GE's industrial FCF will trend in line with earnings and could come in at around $6 billion for 2018, putting the stock on a FCF to market cap ratio of 21 times -- not cheap for a company containing earnings risk.

Turning to the power, Miller cited end market declines as the reason it expects business operating performance to be about flat to 2017, "lower than we outlined at our November investor meeting." Moreover, the end market (measured in terms of gigawatt demand for heavy-duty gas turbines) outlook doesn't look good.

"With respect to Power, we came into the year expecting the overall market for new gas orders in 2018 to be 30 to 34 gigawatts. Based on what we are seeing in the market, this is trending to less than 30 gigawatts," according to Flannery.

Fewer LEAP engines boosted the aviation segment, but will it last?

Finally, GE's most prominent bear, JPMorgan analyst Steve Tusa, seized upon the fact that GE only shipped 186 LEAP engines in the quarter, "roughly 70 engines behind our original plan for the quarter," according to Miller. Tusa asked if the company's guidance for the aviation segment had changed, but Flannery and Miller declined to answer this specific point.

The implication being that when GE catches up on the rest of the 1100-1200 (loss-making) LEAP engines it expects to ship in 2018, the aviation segment will see margin pressure as a result. Similarly, the aviation result in the quarter is flattering and not representative of trends that will play out in the full year.

Three points for the bulls

On a more positive note, Flannery appears to be making ground on some key long-term objectives.

As a reminder, GE has promised $20 billion of asset sales, and the commentary on the earnings call was reassuring, particularly as the first deal (healthcare IT assets) was underwhelming.

The structural cost reductions are likely to help margins in the long term, and the good news should be seen as a feather in the cap of Flannery's nascent tenure. As for the "new operating system," it's easy to dismiss it as mere management platitudes. However, the fact that a major industrial figure, former Danaher Corporation CEO Larry Culp, is now on the GE board should give a lot of confidence.

Culp's hugely successful tenure at Danaher wrote the playbook for the kind of lean manufacturing processes that Flannery wants to implement at GE. It almost sounds like Flannery is reading from Culp's hymn sheet -- no bad thing.

The key takeaway from the earnings

Despite the good headline news, the report didn't ease any fears that GE is under pressure to meet its earnings target for the full year, and let's not forget there is an ongoing SEC investigation on its accounting practices. The healthcare outlook is a bit stronger, although end markets in power remain challenging, and aviation margin is likely to be challenged in future quarters.

On the other hand, GE demonstrated that some of its longer-term strategic aims -- asset sales, cost reductions, restructuring -- are making progress. Cautious investors might well want to wait until the SEC investigation is finished before buying in, but GE stock became a bit more investable after this report.