Please ensure Javascript is enabled for purposes of website accessibility
Log In Help Join The Motley Fool
Free Article Join Over 1 Million Premium Members And Get More In-Depth Stock Guidance and Research
By Lee Samaha – Apr 17, 2018 at 9:03AM

The industrial giant's earnings report will be closely scrutinized by investors. Here's a checklist of the key issues facing the company in the upcoming results.

Despite the best efforts of CEO John Flannery to restore confidence in General Electric Company (GE -2.68%), its stock has continued to sell off in 2018. Going into the first-quarter earnings report, the company needs to try and turn things around. Here's a rundown on five measures of progress to look out for when GE releases its report.

Issues at the GE Power segment lie at the heart of GE's problems, and sorting them out is surely the company's first priority. In the earnings presentations, there are two key things to focus on:

There's little that GE can do about the weakness in end demand for gas turbines, but it could do a better job of anticipating market conditions. For example, back in July 2017, former CFO Jeff Bornstein predicted heavy-duty gas turbine demand of 40 gigawatts in 2017, compared to 46 gigawatts in 2016.

At the end of the year market demand came in at just below 35 gigawatts, and GE Power CEO Russell Stokes is now planning for a market as low as 30 gigawatts in 2018. Moreover, on the fourth-quarter earnings call in January, Stokes noted that the market would be "softer" than he'd expected just a month earlier.

In short, investors need to hear some more positive commentary on end markets, and some indication that the restructuring of power services is starting to bear fruit.

Analysts are expecting $0.96 in adjusted diluted earnings per share for 2018, but GE's guidance remains $1.00 to $1.07, despite power markets weakening since the original guidance was given in November. Something has to give.

Unfortunately, it looks more likely that management's guidance will be revised downward. For example, speaking back in February at the Barclays Industrial Select Conference, CFO Jamie Miller said full-year earnings would be "probably more at the lower end" of the guidance range. This sort of commentary is often the first step in lower guidance.

Flannery has pledged to run GE's businesses with cash flow as a primary focus, and the fourth-quarter results seemed to show tangible improvement -- full-year adjusted cash flow from operating activities (CFOA) came in at $9.7 billion compared to guidance of $7 billion. It was a good result and GE needs CFOA in order to support its dividend.

It's hard to know what CFOA the company will report in the first quarter. Miller has prepared investors for "negative free cash flow" in the quarter. This is not a problem in itself, because GE usually tends to generate most of its CFOA in the second half, but the number needs to create confidence in management's current guidance for $6 billion to $7 billion in adjusted free cash flow for 2018.

The disconnect between revenue growth and cash generation has been a concern for investors for some time; GE needs to demonstrate that it can convert so-called contract assets into cash in the future.

When a company has a right to a payment for a service or product already transferred to a customer, and it's conditional on something other than time, it's called a contract asset. In other words, contract assets represent cash expected from sales already booked. In a move that presaged a dramatic reduction in CFOA guidance for 2017, GE reported a $300 million shortfall in cash generation from contract assets in the first quarter of 2017.

The Securities and Exchange Commission is investigating how GE reports revenue, and investors should keep a keen eye out for what management says about converting contract assets into cash. 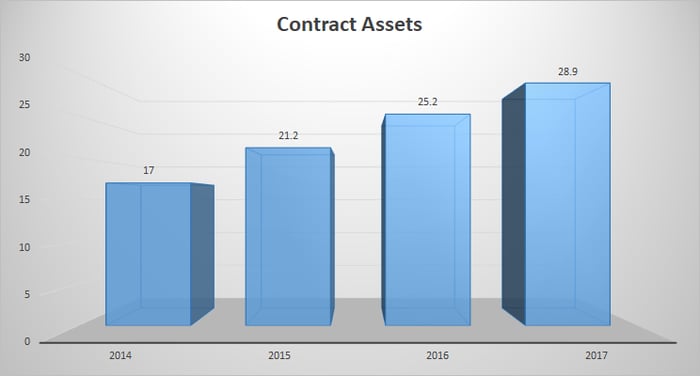 While GE is unlikely to announce any specific asset sales in the earnings presentations, analysts will surely ask questions during the conference call -- not least because GE needs asset sales and debt in order to support its dividend. Management plans to exit $20 billion worth of assets in the next few years, but so far has only announced a $2.6 billion deal to sell its industrial solutions business to ABB, and a $1.05 billion deal to sell a collection of healthcare IT businesses to private equity investment firm Veritas.

It will be interesting to hear what management has to say about future disposals, or even a potential spinoff of its transportation business.

GE may well reduce guidance or lower 2018 expectations on the earnings presentations, but it wouldn't be the most important thing to focus on. It's arguably more important that management demonstrate that cash flow generation is improving, the power business is stabilizing, and asset sales are progressing. If GE can do this, then investors' focus will shift to the fact that the company has two strong businesses -- aviation and healthcare -- which can guide the stock higher in the future.