Please ensure Javascript is enabled for purposes of website accessibility
Log In Help Join The Motley Fool
Free Article Join Over 1 Million Premium Members And Get More In-Depth Stock Guidance and Research
By Lee Samaha - Jul 26, 2017 at 8:30AM

A quick look at the headline guidance from General Electric Company (GE -1.25%) would conclude that everything is on track in 2017, as the guidance ranges were exactly the same as those given in the first-quarter earnings presentation. However, the devil is in the details, and the reality is that this was a disappointing set of earnings, as Jeff Immelt signed off his tenure as CEO by guiding investors toward the low end of expectations. Moreover, the tone and commentary suggested more difficulties to come, and it wouldn't be surprising if new CEO John Flannery begins his tenure by cutting guidance.

Let's take a closer look a difficult quarter for the company.

Going into the quarter, there were three things investors were watching closely:

GE disappointed on all three fronts. 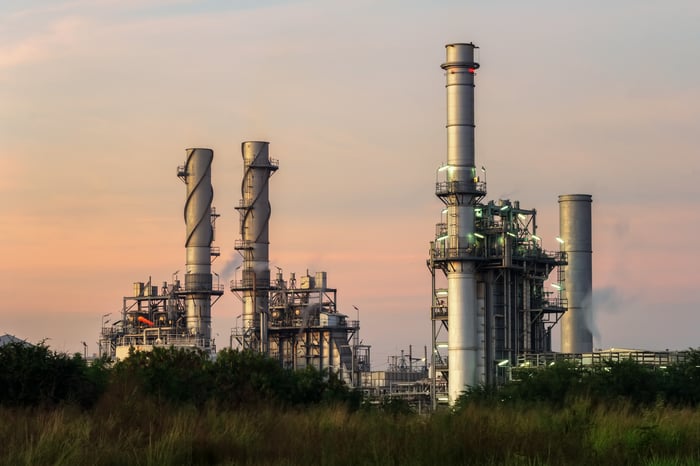 That's where the good news ends. From here, there are three causes for concern.

First, CFO Jeff Bornstein lowered investor expectations for full-year industrial CFOA: "We are guiding to the bottom end of the $12 billion to $14 billion range on CFOA, driven by pressure principally in power, and oil and gas."

Second, GE has a lot to do just to hit the bottom of the range. In 2016, GE generated $11.6 billion in industrial CFOA, and the outflow of $160 million in the first half of 2017 leaves GE needing to generate more than $12 billion in the second half merely to get the low end.

Third, as Bornstein intimated, industrial CFOA is largely dependent on earnings, and given that he also said GE was "trending to the bottom end of the range of $1.60 to $1.70 EPS for the year," it's reasonable to suspect the cash flow target will come under further pressure if earnings deteriorate.

Bornstein outlined how GE was expecting a down year in power demand in 2017. "We expect the power market to see demand for about 40 gigawatts of power this year, down about 10%," he said, adding that he also anticipates a "down market in 2018." Orders of gas turbines, GE's core power product, have slowed significantly in the recent year or so: 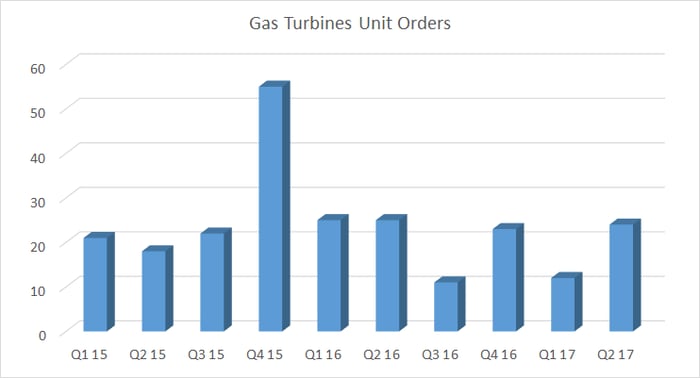 Bornstein thinks GE will still hit its target range for 85 to 95 overall unit orders in power for 2017, but with only "around 39" achieved so far this year, there's still work to do. Moreover, he said service was "definitely" weaker than management's original expectations for 2017, largely because of fewer-than-expected power-plant shutdowns for maintenance.

GE's oil and gas segment is in recovery mode, but it's not as strong as expected. Overall orders increased 12% to $3.2 billion in the quarter, and equipment orders have bounced strongly off a low base, but service orders were down 6% to $1.8 billion. 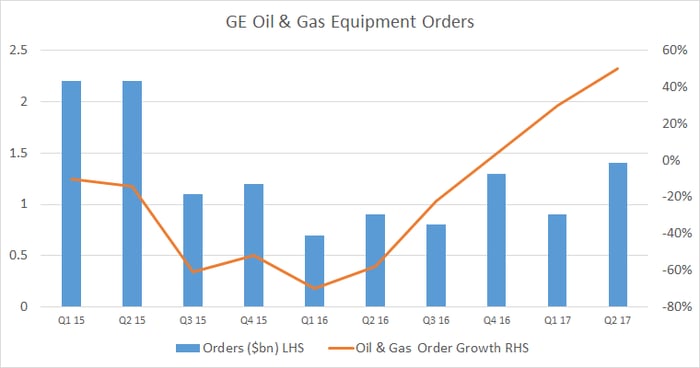 Moreover, Bornstein said the market "remains challenging" and cited a lack of customer willingness to commit to large capital spending. As such, "performance of the business in the second quarter was below expectation."

There are still reasons to like GE, but confidence in management's guidance is not one of them. Indeed, based on current trends, Flannery's first major act as CEO may well be to lower earnings and cash flow expectations even further. However, that may well prove to be a positive catalyst for the stock.

Thinking long term, provided the issues in oil and gas and in power don't turn out to be structural, then GE obviously has growth opportunities, and long-term investors will turn a blind eye to recent problems. The uncertainty over its current guidance will continue until Flannery's review is complete in the fall, but until then, GE's stock is one for the patient investor.