Please ensure Javascript is enabled for purposes of website accessibility
Log In Help Join The Motley Fool
Free Article
Join Nearly 1 Million Premium Members And Get More In-Depth Stock Guidance and Research
By Lee Samaha – May 23, 2017 at 10:04AM

Jeff Immelt's company has been accused of having structural problems with its power segment. Here's what investors need to know about it.

On General Electric Company's (GE -0.64%) last earnings call, Citigroup analyst Andrew Kaplowitz raised a question attesting to fears that GE's power segment could be facing structural issues -- rather than "transient and cyclical" ones. It's actually a key consideration, because power is GE's historical strength, and gas turbines are still its single most important product. Let's take a look at the arguments for and against.

There are four arguments for why the power segment is facing structural issues.

First, the company had two separate issues with the power segment in the first quarter, according to its recent earnings report. Overall industrial cash flow performance was $1 billion worse than expected, with $200 million due to "delinquent accounts in tough regions," according to CFO Jeff Bornstein. Furthermore, an unspecified amount was due to some large power orders, mainly in the Middle East, failing to close in the quarter.

Second, going back to the fourth quarter of 2016, management served notice that GE had shipped 104 gas turbines in 2016 compared to previous expectations for 110 to 115. The reason? Six units didn't close in the fourth quarter, with CEO Jeff Immelt claiming they were going to Bahrain, Iraq, and to unspecified customers in West Africa.

Third, the following chart of gas turbine orders and sales shows slowing growth in gas turbine orders, which is likely to slow sales growth in future quarters. However, it should be noted that Bornstein declared GE power was "on track for 100 to 105 gas turbines in 2017," implying flattish growth over 2016. 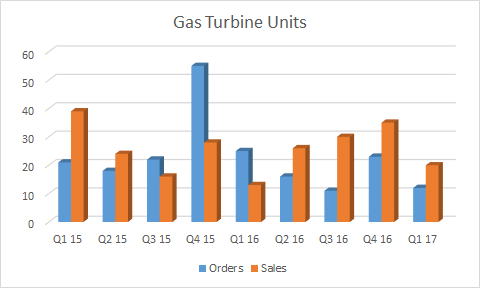 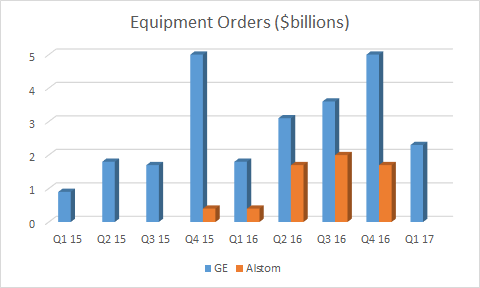 In a nutshell, gas turbine order growth is slowing, and GE appears to be having issues while it tries to sell into difficult end markets. Moreover, without the Alstom acquisition, its power equipment order growth would likely have been negative in the last four quarters.

The arguments above are compelling in the sense that they point out issues with GE's power segment, but are they long-lasting issues, or are they merely transient ones? Moreover, do some of these issues really matter? I have four counterarguments.

First, who cares if growth is due to the former Alstom energy assets? After all, they are part of GE now, and there is no such thing as good or bad earnings. In fact, the Alstom assets were bought precisely because they added growth and opportunities for significant cost synergies.

Second, the difficulties with delinquent accounts and closing orders in the Middle East are possibly a consequence of sluggish growth in the region relating to political instability and oil prices significantly lower than many in government had expected just a few years ago. This suggests it's a cyclical issue. 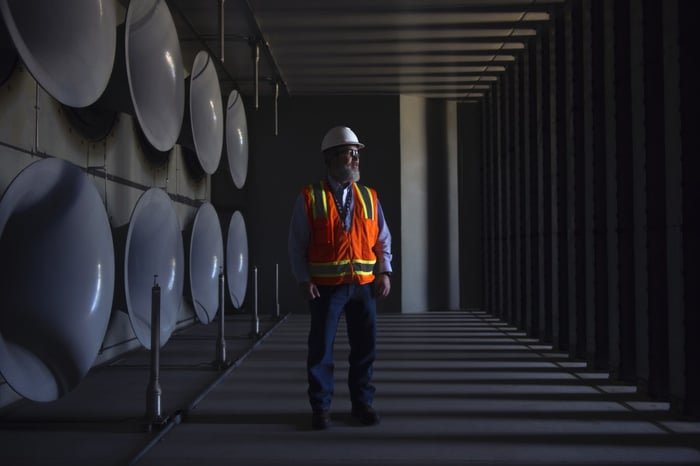 Fourth, GE's growth prospects in power aren't just about gas turbine and overall equipment orders. In fact, Immelt has been very vocal about his plans to transform GE into a digital industrial company. In other words, the growth and implementation of the Internet of Things in GE's power solutions is a key growth catalyst for GE, and particularly in services.

There's little doubt that GE's power segment isn't set for a great year in 2017, and downside risks remain. On the other hand, management appears to be making the right moves in order to wring every bit of growth it can out of the segment, and there is little Immelt can do about economic weakness in the Middle East.

On balance, I would argue that the issues are indeed largely cyclical, and given any improvement in its power end market, the segment is likely to flourish again. However, for now, there is downside risk.