I'll cut to the chase: it's Danaher Corp. (NYSE:DHR) Why? It's simple. Throughout the last 20 years or so, the conglomerate has incorporated many of the principles that made Warren Buffett so successful. In fact, I would argue that Danaher's management has run the company almost in the manner of an investment firm such as Buffett's Berkshire Hathaway. An argument which is only strengthened by the recent agreement to purchase life science filtration company Pall Corporation (NYSE: PLL)--a move which was suggested in a Fool article on takeover targets for 2015. Let's take a closer look at why investing in Danaher stock is something that could suit Buffett and what the Pall Corp deal means for investors. 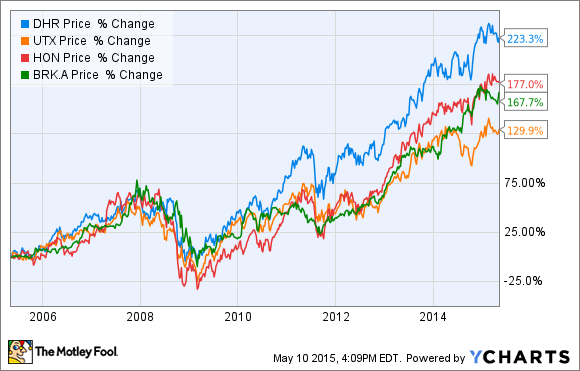 As the chart above demonstrates, Danaher has significantly outperformed its peers, and Berkshire Hathaway, over the last ten years. Danaher isn't the most well-known company -- for a primer on the company, check out this recent earnings review -- but after a long period of consistent growth its market cap now stands at around $62 billion.

Indeed, the growth has put the company in a financial position to buy Pall Corp for $13.8 billion. Danaher's intent is to create a science & technology company, retaining the Danaher name, by merging its existing dental and life science & diagnostic segments, with its water quality, product ID business and Pall Corp. Meanwhile, the remaining industrial businesses will be merged into the creation of a company called NewCo.

However, potential investors need not worry about any changes in how NewCo will be run, because future NewCo CEO James Lico was unequivocal in the press release:

"I am committed to building and reinforcing the DBS culture and ensuring the company exceeds our customers, shareholders and associates' expectations."

The Pall Corp deal is expected to close at the end of 2015, with the separation of Danaher and NewCo taking place around the end of 2016.

What is DBS?
Buffett built his reputation by buying a series of unfashionable and undervalued companies and then increasing their productivity over time, and Danaher's story is similar. Essentially, the company is known for buying relatively unloved businesses and then applying its so-called Danaher Business System, or DBS , in order to increase their return on capital. In fact, Danaher has bought more than 400 companies since 1984, with the Pall Corp deal being largest to date.

The DBS is essentially a set of core principles embodying lean manufacturing processes and, continuous improvement. An example of DBS in action is Danaher's 2011 purchase of Beckman Coulter for $6.8 billion. Since then, Danaher has increased operating margins at Beckman Coulter  by more than 700 basis points.  Buffett would love this kind of increase in productivity. After all, he grew Berkshire Hathaway by buying companies with the intent to increase their return on capital and free cash flow generation. As you can see from the following chart, Danaher is extremely effective at increasing free-cash flow as well. 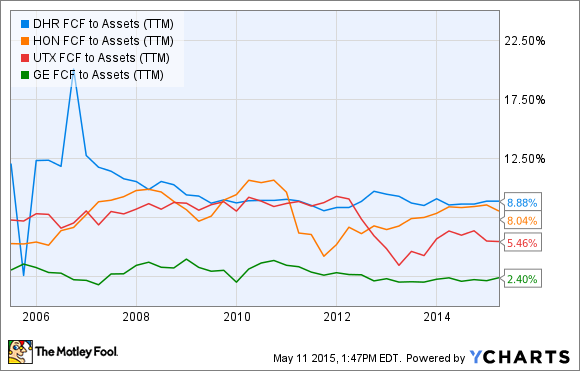 In addition, with a miserly trailing dividend yield of just 0.5%, Danaher shares Buffett's predilection for reinvesting free cash flow in order to generate earnings growth for investors rather than pay it out in dividends.

"Boring" businesses
Over time, Danaher's portfolio of businesses has grown to cover areas as diverse as water treatment systems, fuel dispensers, packaging printing, dental equipment and consumables, and life science and diagnostic systems. In other words, precisely the kind of seemingly mundane "old economy" businesses Buffett is known for purchasing.

Investing in long-term trends
In a previous article, I noted that Danaher was increasing its share of revenue from consumables. This is important because it suggests an increase in recurring revenue (as consumables are replaced, just as a blade is in the razor-razorblade business model). Moreover, the Pall Corp deal is going to accelerate the development of its recurring revenue base Here is how Danaher CEO Thomas Joyce described it in the press release:

Why Buffett should buy Danaher stock
My argument is that Danaher's policy of acquiring business and then applying its DBS to enhance productivity, is a similar sort of strategy that Buffett undertook with the businesses he bought for Berkshire Hathaway--and the Pall Corp deal is further evidence of this.

Moreover, since Danaher's management, and NewCo's future management, confirmed that DBS remains at the heart of how the companies will be run, then anyone buying Danaher stock right now will be buying into the same Buffett-like principles that proved so successful over the long-term.