Concluding its first full year of mineral production at the Brucejack mine in British Columbia -- the company's single asset in production -- Pretium Resources (NYSE:PVG), a mid-tier gold producer, had a lot to celebrate in 2018. In addition to reporting revenue of $455 million, a 155% year-over-year increase, the company reported earnings of $0.20 per share, representing a significant turnaround from the $0.09 loss per share that it reported in 2017. The glittering results extended to the cash flow statement as well. While Pretium reported $73 million in operational cash flow in 2017, the increased gold production at Brucejack helped the company to generate $197 million in cash from operations in 2018.

Will the coming year be as lustrous? Let's dig into Pretium's forecast for 2019 to see what investors can expect. 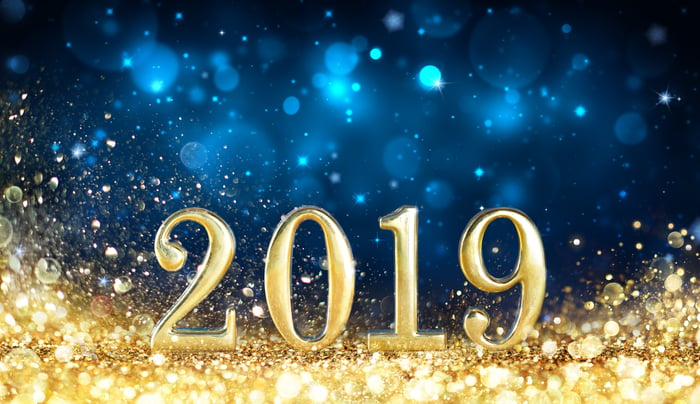 While Pretium reported an average 2,755 metric tons milled per day in 2018, management forecasts this increasing to 3,800 metric tons per day by the end of the year, thanks to a mill upgrade and underground expansion at Brucejack. Furthermore, management believes this will translate to an average milling rate of 3,500 metric tons per day at a grade of 10.4 grams per metric ton, or g/t. Although the forecast grade is lower than the 11.9 g/t that the company reported in 2018, management, on the Q4 2018 conference call, explained that "the lower grade in 2019 reflects a sequencing of stopes in the mine plan to achieve the development ramp-up to 3,800 tonnes per day, working within geotechnical and ventilation constraints." Speaking further to the anticipated average grade of 10.4 g/t, management suggested that the grade is not indicative of that which will be recognized during the remaining life of the mine. Should the company succeed in recognizing the increase in production, management estimates gold production will rise to 390,000 to 420,000 ounces for 2019.

More gold... but at what cost?

Although Pretium forecasts that gold production will rise in 2019 compared with 2018, the company also forecasts an increase in all-in sustaining costs (AISC). Whereas the company reported AISC of $764 per gold ounce sold in 2018, management sees this rising to $775 to $875 per gold ounce sold in 2019. Granted, investors will find the expected AISC increase to be undesirable, but on the recent conference call management explained that the AISC forecast includes several "one-off capital items and expense growth costs," including access road and camp upgrades and an underground maintenance shop. Take out these one-off capital items and the expense growth costs, and management estimates AISC of $675 to $775 per ounce of gold sold.

Despite providing a detailed forecast regarding gold production and AISC, the company didn't reveal its expectations regarding profitability and cash flow. Nonetheless, the company appears optimistic that its prowess in digging gold out of the ground will translate to generating plenty of green. For example, the company plans on shoring up its balance sheet in the coming year, targeting debt reduction of approximately $140 million, which will be sourced from operating cash flow.

The yellow brick road to the future

In addition, Pretium aims to provide an updated life of mine plan for Brucejack in the second quarter. Based on a feasibility study from 2014, the mine life for Brucejack stands at 18 years.

Why Pretium could look golden

Between clear mineral production figures and cost guidance, there are plenty of metrics that investors can monitor in the coming months to see if the company performs as well as management believes it could. Perhaps the most important figures to watch, however, are the gold production and cash flow, since a short-seller's report, penned by Viceroy Research Group, raised doubts regarding Pretium's ability to service its debt and the gold mineralization at Brucejack. If the company succeeds in achieving its gold production forecast and reduces its debt by the anticipated $140 million, it could go a long way in the company's fight to regain confidence in the eyes of investors.