Shares of Tencent (OTC:TCEHY) fell slightly after the company's recent earnings report, and it's not hard to figure out why: Tencent's growth slowed to just 16% last quarter, its lowest quarterly growth rate since becoming a public company in 2004. In addition, non-GAAP operating margins contracted slightly, from 34% to 33%.

But are these reasons to panic?

Tencent's current numbers may be underwhelming, but the company also has several catalysts on the horizon. Not only is Tencent coming out of a gaming downturn caused by a ban from the central government, but newer growth seeds that have long taken a back seat to gaming are now starting to take off. 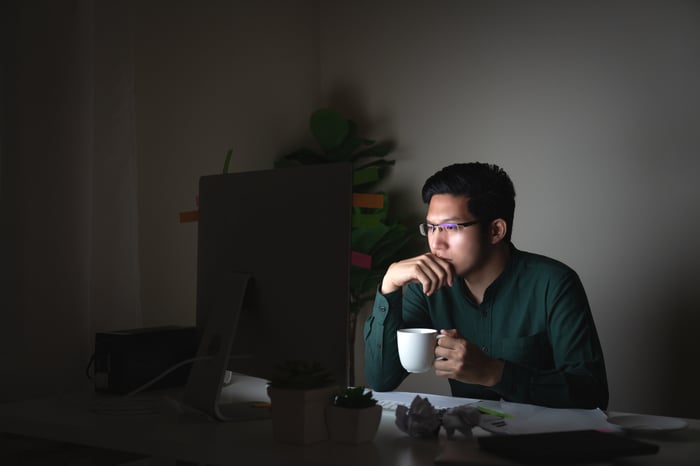 For the first time, Tencent is breaking out its fintech and cloud segment, which it previously lumped into its "other" segment. If you follow the tech space, you're probably aware that payments processing and cloud computing are terrific businesses. They each have a high degree of "stickiness," and as customer numbers grow, these businesses tend to grow along with them, with little incremental capital. Of course, it takes a lot of capital to build such systems from the ground up, which is why only a handful of large tech companies can compete in the cloud space.

Apparently, Tencent thinks the unit is ready for prime time; however, the company doesn't break out cloud and fintech separately, but rather as a combined unit. That's a tad frustrating, and akin to what Alphabet does with its cloud unit, lumping it in with its hardware and app store. However, Tencent did say fintech was a "majority" of revenue in this segment.

The combined fintech and cloud segment grew at a very nice 44% rate year over year, making up 25% of Tencent's revenue. That's the second-largest segment next to online games, at 33% of revenue. Much of the focus is on its dominant online gaming segment, but that could change if the fintech-cloud segment keeps up this trajectory.

However, this segment is also likely a drag on margins. CEO Pony Ma said that cloud infrastructure and platform infrastructure services are low-margin and capital-intensive, but that software-as-a-service is much higher-margin. In addition, Tencent was recently forced to keep deposit balances in its Tenpay app in non-interest-bearing accounts (as opposed to interest-bearing securities) by the Chinese authorities, which is also negatively affecting year-over-year results.

However, fintech's results should improve as the company laps the divestiture of interest-bearing securities. Over time, as cloud services continue to scale, they should become more profitable as well.

Tencent has also been damaged over the past year by the Chinese government's decision to pause approvals of new video games over concerns about gaming addiction. However, the government has now lifted the ban, and has started approving games once again. Still, Tencent was unable to monetize its smash-hit game PlayerUnknown's Battlegrounds in China last year, and just shut down the game in the country.

But Tencent just replaced PUBG with a new game called Game for Peace, featuring a more nationalistic theme. Game for Peace is a similar game to PUBG, but one that Tencent should be able to monetize, so the drag on earnings from non-monetized hits could pass in the quarters ahead.

During the quarter, Tencent's online gaming revenue segment actually fell by 1% year over year; however, on a quarter-over-quarter basis, online games revenue grew 18%, signaling that the company is beginning to benefit from the continuation of new game and monetization approvals. With the introduction of Game for Peace and the resumption of game approvals, the headwind in Tencent's largest segment should subside shortly.

Meanwhile, Tencent's other "core" segment, WeChat, continued its strong growth. Monthly active users surpassed 1.1 billion, up 6.9% year over year. That's pretty impressive growth for a platform that big, and one which isn't used nearly as much outside of China. While the company's online advertising revenue grew at a rather unremarkable 25%, the "social network and other" segment of advertising grew at a more robust 34%. That's much higher than the 26% revenue growth for Facebook, the closest comparable company. This was also during a slow quarter for the Chinese economy.

While the headline "slowest revenue growth ever" may grab attention, Tencent's business should reaccelerate this year. The high-growth fintech and cloud segment looks poised to take a larger part of the revenue pie; the online gaming segment seems poised for a turnaround; and the core WeChat platform seems as strong as ever. Investors should stay the course.