The massive transition away from on-site computing is still in its early stages, and Microsoft, Amazon, and Alphabet are well-positioned to profit from the trend.

One of Warren Buffett's adages is, "If you aren't thinking about owning a stock for 10 years, don't even think about owning it for 10 minutes." And yet, in today's age of rapid technological disruption, it's increasingly hard to predict what the world will look like in a decade, making those true buy-and-forget-about-it stocks rarer and rarer.

Still, there's one business area that we can confidently forecast will grow over the next decade: the public cloud.

Even better, only a handful of companies have the financial means and technical expertise to compete in this high-growth market. And among those, the three leaders are Amazon (AMZN 3.04%), Microsoft (MSFT 0.07%), and Alphabet (GOOG 1.56%) (GOOGL 1.90%).

Here's why these three companies are poised to outperform over the next decade. 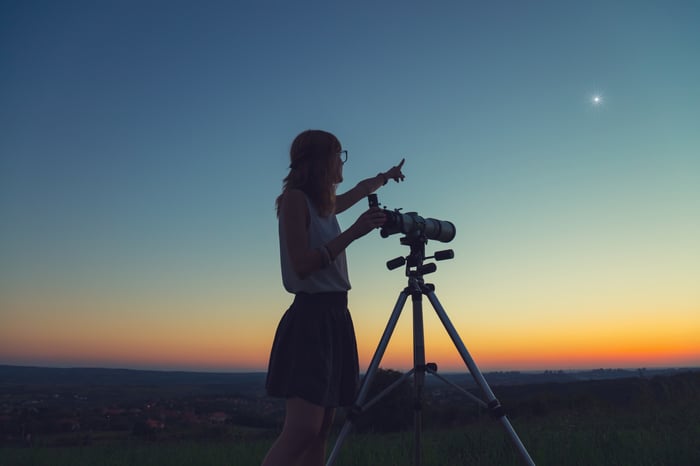 The advantages of the cloud

Perhaps the most consequential change happening in the business world today is the movement of enterprise workloads from on-premise data centers to the public cloud. It's a shift that has many benefits:

Of course, just because an industry segment has a long growth runway ahead of it doesn't mean every company operating in the business will succeed. Fortunately for Alphabet, Amazon, and Microsoft, the cloud infrastructure market today bears all the hallmarks of an oligopoly, in which only a handful of large leaders can effectively compete.

Amazon became the first company to offer cloud infrastructure services in 2006, when it realized that it could offer extra space in its highly reliable data centers to outside parties. This decision gave Amazon a seven-year head start on its rivals, who were either too slow to act, or too slow to recognize the opportunity in cloud computing. Today, Amazon accounts for roughly 32% of the cloud infrastructure market, according to Canalys research -- making it the leader by far -- and AWS still grew a whopping 47.1% in 2018, a bit faster than the overall market.

Microsoft and Google coming on strong

The only way for would-be rivals to compensate for Amazon's first-mover advantage was to quickly spend huge amounts of money on data centers and engineers. Only a handful of companies had that capability: most notably, Microsoft and Alphabet.

Microsoft and Google are benefiting from the fact that many businesses, especially in retail, don't want to use Amazon for their cloud-computing needs. In addition, many enterprises use multiple cloud infrastructure providers to avoid getting "locked in" to a single one.

While these three companies currently control 57% of the cloud infrastructure market, each is growing its cloud business faster than the overall market.

According to Crisp Vendor Universe, only 20% of businesses have cloud computing as an established presence in their IT processes and strategies, 34% are just implementing their first cloud workloads, 28% are just in the planning and evaluation phase, and 19% have no cloud strategy yet whatsoever. Based on those figures, the cloud market has significant room to grow.

The side dish is the main course

Of course, the cloud isn't the primary business for any of these three companies. Amazon is the worldwide leader in e-commerce, Microsoft is the leading enterprise software vendor, and Google is the world's largest search engine and digital video platform (via Youtube). These leading businesses still draw the lion's share of investor attention, and make these huge companies safe, stable parts of anyone's portfolio.

However, for all three companies, cloud infrastructure represents yet another profitable growth market with a decade of runway ahead. While cloud is currently a relatively small portion of each company's revenue, as they grow into larger and larger portions of their businesses, the investing world should increasingly appreciate that these tech giants have not one, but multiple fabulous businesses. Because of this, I think all three are likely to continue outperforming over the long-term.