Which biotech companies are in the best position to benefit from this enormous commercial opportunity? Intercept Pharmaceuticals (NASDAQ:ICPT) and Viking Therapeutics (NASDAQ:VKTX) arguably sport two of the most promising experimental NASH therapies in their respective pipelines. As such, let's break down which of these NASH-oriented biotech stocks is the better buy right now. 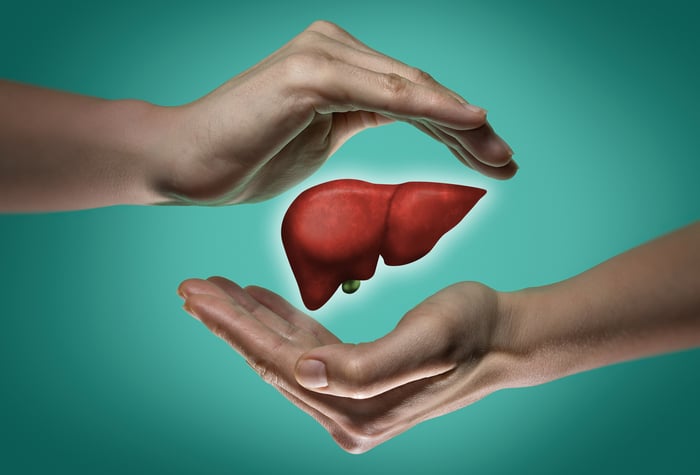 Intercept's NASH candidate is Ocaliva, a selective farnesoid X receptor agonist that's already approved for another liver disease -- primary biliary cholangitis (PBC) -- in Australia, Canada, the EU, Israel, and the United States. Last February, the biotech unveiled an 18-month interim analysis of Ocaliva's late-stage NASH trial, dubbed Regenerate. That interim peek at the data revealed that patients receiving the 25 mg dose of the drug met one of the study's two co-primary endpoints -- namely, improvement in liver fibrosis by at least one stage, with no worsening of NASH.

Intercept is preparing to file regulatory applications for Ocaliva's NASH indication in the U.S. and the EU before the end of 2019. If it receives that expended approval, Ocaliva's sales might hit $5 billion within a few short years. That's a tremendous commercial opportunity for a company with a market cap today of approximately $2 billion.

What's the catch? Intercept's flagship liver disease medication produced worrisome levels of pruritus (itching) in the high-dose (25 mg) arm of Regenerate. While this particular side effect probably won't derail its approval for NASH, it could ultimately put it at a competitive disadvantage. The good news, though, is that Ocaliva stands to hold a virtual monopoly in the massive NASH market for at least a year, if not longer.

The case for Viking

This study showed that VK2809 can deliver substantial reductions in liver fat, without any serious side effects, even at low doses. Viking has been championing VK2809 as a possible "best-in-class" NASH therapy ever since that trial data was released.

The company is presently gearing up for a Phase 2b study to evaluate VK2809 in biopsy-confirmed NASH patients. If things go according to plan, Viking should be able to showcase its next batch of NASH data no later than the summer of 2020.

Based on this developmental timeline, VK2809 could be on track for a commercial debut in mid-2022. By then, there could be two or three NASH drugs already on the market.

From a risk-vs.-reward standpoint, Intercept is the hands-down winner in this head-to-head matchup. Ocaliva has the best shot at becoming the first drug to be approved for NASH, and the biotech also sports a fairly healthy revenue stream through Ocaliva's PBC indication. Viking, on the other hand, could turn out to be a late-comer to the NASH party, and it lacks an approved product to fall back on in the event things don't go according to plan.