The streaming video receiver is now showing pop-up ads during commercials, with more rival receivers coming to the market.

At its inception, streaming video receiver company Roku (ROKU 0.70%) was nothing more than a hardware outfit. And to its credit, it was a good one, leapfrogging Apple (AAPL -1.36%) before the iPhone maker had a chance to take control of the young market. As of the most recent tally, little Roku and behemoth Amazon (AMZN -0.38%) evenly split about 70% of the over-the-top-television receiver space.

In the search for growth, though, Roku changed. No longer content to merely sell devices, a couple of years ago it turned up the heat on its advertising business. By early last year, it was driving more revenue by selling eyeballs to advertisers than it did by selling devices to consumers. Since then, it's continued to grow its ad business. Its hardware arm? Not so much.

And, so far, the formula has worked. With its most recent effort to establish more ad-sales opportunities, though, the maturing company may find there are limits to how much advertising consumers are willing to tolerate.

No doubt about being an advertising platform

On the surface, the newest ad format seems benign. During commercials that normally air anyway, a new pop-up ad appears, asking viewers if they'd like a reminder regarding a program sponsored by the same advertiser. The new ads don't interrupt actual television programming.

Still, it's an ad within an ad, and it follows April's somewhat controversial addition of features that funnel viewers toward the company's proprietary products at the expense of other content providers.

In some ways, though, it was an inevitable evolution. All the way back in July of last year, Roku CEO Anthony Wood was willing to concede:

The tune's not changed in the meantime. In an interview with Alta's Will Hearst this past August, Woods offered an even bolder observation, saying, "Most people don't realize that Roku is essentially an advertising company. That's where we generate the bulk of our gross profit. It comes from ads."

The numbers support the claim. Once ad revenue -- or "platform" revenue -- eclipsed player revenue in the first quarter of 2018, it never looked back. This year's second-quarter advertising revenue of $167.7 million was more than twice device sales of $82.4 million. And, advertising gross profit of $109.7 million trounced hardware's gross profit of $4.5 million. The divergence is likely to continue in the future, too. 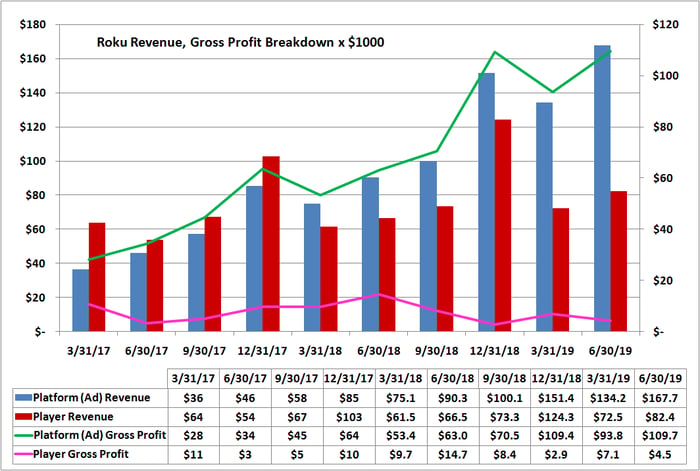 And, much like Alphabet's (GOOG -1.94%) (GOOGL -2.06%) Google and Amazon, Roku understands the value of granulated data about the people watching streaming video via Roku devices.

Relying on ads for growth is a slippery slope

It's all a slippery slope, though, for a small-cap stock like Roku. In fact, the mere prospect of pushing the advertising envelope to swing to an operating profit is intoxicating when competition is breathing down its neck.

That competition is palpable, to be sure. Not only has Amazon caught up with Roku on the device market share front, but Comcast now offers its customers a free set-top receiver. Facebook recently debuted a Portal TV device of its own. Roku's success was never going to go unchecked once the advertising potential of a platform was proven.

And, that's the rub. Roku has already been thinking and acting aggressively as an advertising medium. Ad revenue has driven the bulk of the company's growth over the course of the past four quarters, in fact. Player revenue is up 18% for that timeframe, while platform revenue has improved nearly 80%. But, the company is running out of places to show ads.

That makes the next batch of rival set-top boxes all the more problematic. As Pivotal Research Group analyst Jeffrey Wlodarczak commented last month, "We see dramatically more competition emerging that will likely drive the cost of OTT devices to zero and put material pressure on advertising revenue." He adds, "the big boys with massive leverage are likely to make Roku growth much more difficult."

Translation: Roku may end up proverbially shoving ads down device owners' throats in an effort to maintain its current pace of platform revenue growth. Consumers should tolerate the latest ad placements, but those consumers may finally reach a business-crimping level of ad fatigue with the next evolution of Roku's hardware.