Investing in biotech stocks isn't for the faint of heart. These companies often boast one (or more) potential blockbuster drugs, but a single misstep on the path to approval -- such as a negative clinical trial result or a regulatory setback -- can send their share prices crashing. Still, if you pick a biotech that finds success, your investment can pay rich dividends. With that in mind, let's turn our attention to one that has been making a lot of noise in 2019: bluebird bio (NASDAQ:BLUE). Is it a buy?

Bluebird focuses on treatments that employ gene therapy. Technical details aside, such therapies aim to replace or supplement the defective genes that cause certain illnesses with their healthy versions. Scientists have been working to turn these techniques into safe, effective treatments for years, but manipulating the basic building blocks of life in this way is no simple exercise. However, gene therapy offers the potential to cure conditions that are otherwise extremely difficult -- if not impossible -- to treat via other means. 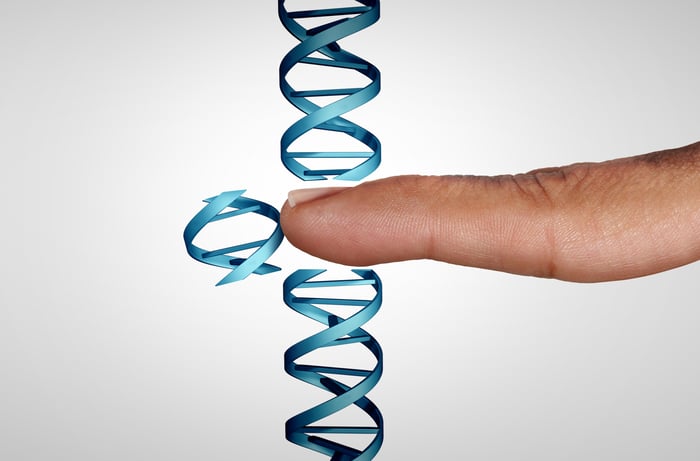 Bluebird is going after several challenging targets. Its crown jewel is Zynteglo, a treatment for a genetic blood disease called transfusion-dependent beta-thalassemia (TDT). It recently got the green light in Europe, making it the only approved therapy Bluebird owns. An estimated one in 100,000 people have TDT, and Bluebird's treatment for the rare condition is a big deal because the only known therapy for it prior to Zynteglo was the administration of regular blood transfusions.

The price tag on this blockbuster treatment won't be low: Zynteglo will cost about $1.8 million per patient. But the company said it would accept payment under a five-year installment plan. Despite this major win, though, it will likely be a while before Zynteglo makes a material impact on the company's financials. This isn't just any medicine, and administering it properly requires trained staff and proper facilities. The company said:

Due to the highly technical and specialized nature of administering gene therapy in rare diseases, bluebird bio is working with select qualified treatment centers that have expertise in stem cell transplant and treating patients with TDT to provide Zynteglo.

Despite the treatment's potential, its slow rollout might not sit well with many investors.

Bluebird is also developing other drugs, such as a medicine for the treatment of cerebral adrenoleukodystrophy (CALD). This rare and potentially fatal neurological condition develops in boys -- generally between the ages of 3 and 12 -- as a result of the rare genetic disorder adrenoleukodystrophy (ALD). It affects one out of 21,000 male newborns, about 40% of whom develop CALD. So far, the only known effective way to treat CALD is with a stem cell transplant.  Bluebird's candidate treatment is currently in phase 2/3 testing.

Bluebird is also developing LentiGlobin, a drug to treat sickle cell disease (SCD), a serious condition that leads to organ damage and can significantly reduce a person's lifespan. SCD is typically treated with regular blood transfusions.

It's estimated that about 100,000 people in the U.S. have sickle cell disease and millions more have the illness in other parts of the world. Bluebird recently reported encouraging study results for this drug: The results of a 21-month study with a small number of patients (17, to be exact) who were treated for SCD with LentiGlobin showed that none needed regular blood transfusions after treatment.  However, the company won't start its phase 3 study for LentiGlobin until early next year, so it will probably be at least a couple of years before this drug is rolled out, assuming it gets approved.

Bluebird is currently unprofitable, which is hardly surprising. The company is in the process of developing several blockbuster drugs and its only approved treatment hasn't exactly hit the market yet. During the third quarter, Bluebird reported revenue of $8.9 million, which it generated as a result of a collaboration arrangement it has with Celgene, as well as royalty payments received from a deal with Regeneron.

However, the company's revenue declined by 23% year over year. Its operating expenses increased by 35% to about $219 million, and its net loss per share of $3.73 was significantly worse than the net loss per share of $2.73 recorded a year ago. It turns out that manufacturing game-changing gene therapy treatments isn't cheap. However, given the recent approval of Zynteglo in Europe, and the rich pipeline the company boasts -- including its potential blockbuster sickle cell treatment -- Bluebird looks like a high-risk, high-reward play. Investors with a long-term focus, and who are comfortable with a little risk and uncertainty, should definitely consider purchasing its shares.