As enticing as new up-and-coming biotech stocks may be, the safer and potentially better long-term play for investors is to buy shares of more established brands. Both Novo Nordisk (NYSE:NVO) and Abbott Laboratories (NYSE:ABT) are great examples, with market caps of around $150 billion each.

These healthcare giants are mature companies that have no problem recording profits and even paying dividends -- and won't take investors on wild rides. Choosing between the two stocks can be difficult, however, as they focus on different areas and also possess different risks. Let's take a closer look at the two to see which stock is the better buy today.

Abbott's strength is its diversification

For investors who are in search of consistency, Abbott Laboratories offers a strong mix of dividends and growth that other stocks simply can't beat. The medical device company has a variety of products that allows it to continue growing -- cardiovascular and neuromodulation, diagnostic, and nutritional. From glucose monitors to infant formula and to its popular Ensure brand of nutritional products, Abbott is a well-diversified stock that isn't dependent on one area or segment to continue growing.

The company is coming off a strong fourth quarter where it beat analyst expectations for revenue with growth of 7.1%, as the company's medical device segment and its pharmaceuticals segment were both up 10% year over year. What's encouraging is that not only is the company still growing, it's also not standing pat as it continues to develop new devices. Abbott announced in February that the Food and Drug Administration approved a trial for the company's Amplatzer Amulet device, which looks to help people with atrial fibrillation and reduce their risk of stroke and bleeding. 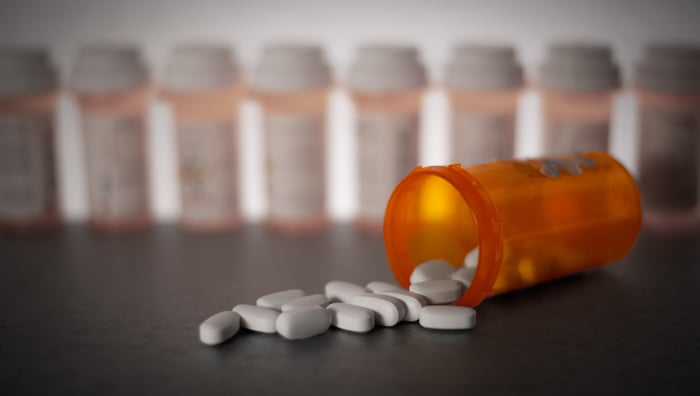 Abbott looks like a good buy even before discussing what may be most attractive about the stock: its dividend. With a solid track record of paying dividends that includes increasing payouts for 40-plus years, Abbott becomes an even better buy when factoring in the recurring income you can expect to hold from owning shares of the company. Admittedly, its quarterly dividend of $0.36 will only produce a modest dividend yield of 1.65%, which is below the S&P 500 average of 1.85%. The real value is from holding over the long term and seeing the dividend payments rise over time. Investors who have held shares of the stock since 2013 have seen their dividend payments more than double from the $0.14 that Abbott was paying back then.

Novo is comparable, but with a focus on diabetes

Novo Nordisk has a lot in common with Abbott, as it also offers a strong dividend and is still showing good growth. The company released its fourth-quarter results on Feb. 5, and while it generated 9% sales growth during the quarter, the company expects its growth rate, without the impact of foreign exchange, to grow between 3% and 6% in 2020. One difference from Abbott is Novo's revenue mix is not as diverse, with 84% of the company's revenue in Q4, as well as for the entire year, coming from diabetes and obesity care products. Novo's biopharma segment contributed the remaining 16% of its sales.

In addition to having less diversification, the Danish company also has more exposure to foreign exchange. Although its Q4 numbers saw 9% sales growth from the prior year, at constant exchange rates, that growth was more modest, at just 6%. Without foreign exchange, its diabetes and obesity segment rose by 7% in Q4 while biopharma sales were up 2%.

Novo pays a dividend of around 2% per year, and it too has increased its dividend payments annually -- although, with just more than 10 years of consecutive increases to its payouts, it's nowhere near Abbott's impressive track record.

Both of these stocks look to be attractive long-term buys, and in three years both have outperformed the Health Care Select Sector SPDR ETF: 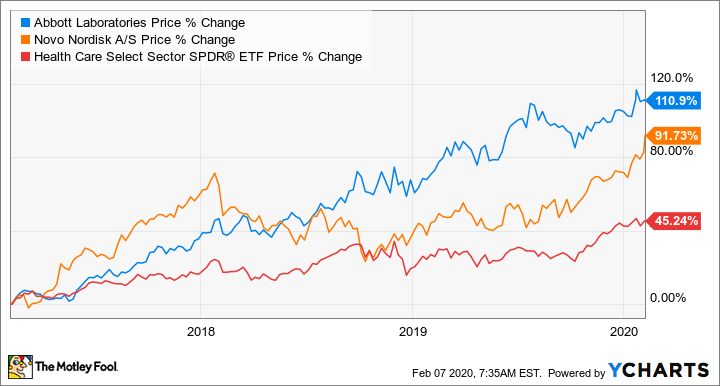 There isn't a lot separating them and that's where valuation can help break the tie. Abbott is trading at a forward price-to-earnings ratio of 22, which is slightly less than the 24 times investors are valuing Novo at today. With a slightly better valuation, more diversification in its revenue, and less foreign-exchange risk, Abbott is the better buy of these two healthcare stocks, but not by much.