The COVID-19 pandemic has forced many companies and investors to think differently about some stocks, and Caterpillar (NYSE:CAT) is one of them. It's always been known to have highly cyclical earnings that go up and down relatively in sync with the broader economy.

Management has made great efforts to reduce the cyclicality of its earnings in recent years in an effort to better position Caterpillar in case of a downturn.

Unfortunately, we now have a downturn. So it's time to see just how well-positioned Caterpillar is for it. In particular, will its dividend -- currently yielding 3.6% -- prove sustainable? 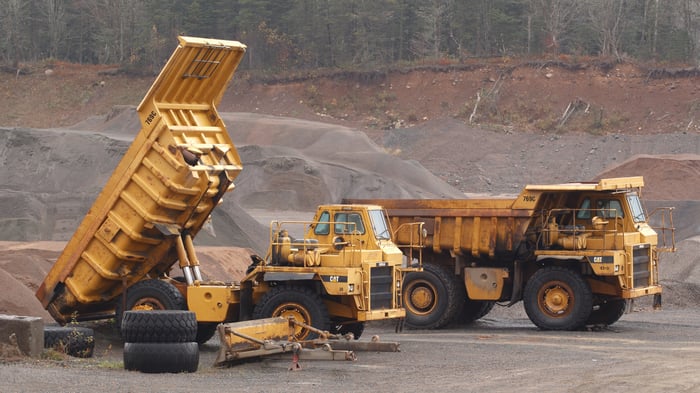 It's no secret that Caterpillar's revenue and earnings are going to take a major hit in 2020. Although the magnitude of the downturn is still hard to discern because the adverse effects of the COVID-19 pandemic are just beginning, a quick look at the company's retail sales stats offers some possible clues.

Note that Caterpillar's total rolling-three-month sales totals were down 17% in March. In addition, Wall Street analysts have a consensus estimate for sales to decline 24.8% to around $40.5 billion in 2020. 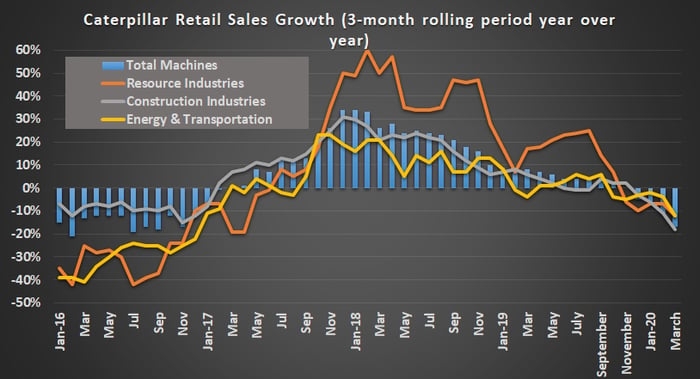 Why Caterpillar can sustain earnings and its dividend in the downturn

In a nutshell, the argument for better funding resources in this downturn is that management has significantly reduced its cost base in recent years while growing its recurring revenue from aftermarket sales. Therefore, Caterpillar should have a higher profit margin profile than in previous down cycles, and its free cash flow (FCF) generation should be relatively better too. Simply put, it's a less cyclical company than it used to be. 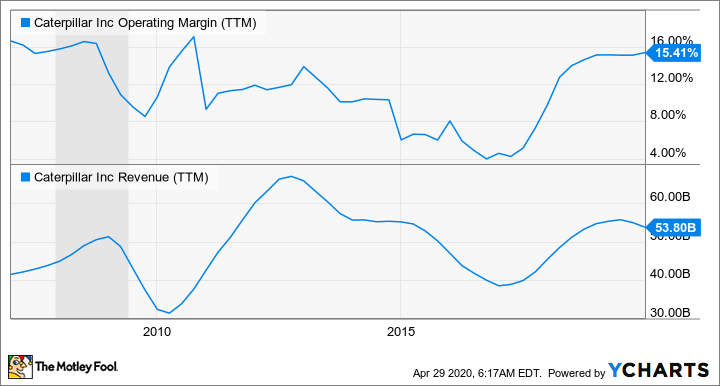 In fact, during the investor day presentation in 2019, management outlined that its historical FCF range in 2010-2016 was $3 billion to $6 billion. However, thanks to measures taken to improve profitability, Caterpillar's future FCF cash flow range is now estimated to be in the $4 billion to $8 billion range.

Given that Caterpillar is currently paying an annual dividend per share of $4.12 and has around 550 million shares issued, it implies a total dividend payment of $2.3 billion in 2020. It's a payment that would easily be covered by the low point of the historical FCF range ($3 billion) and the low point of the estimated future FCF range ($4 billion).

During the recent earnings call, Evercore analyst David Razo asked management if it believes its margins will be higher through the current cycle than they were at the same point in the previous cycle. By this he means that, if equipment sales got down to the $36 billion level in 2016 (total sales were at $39 billion) during the last downturn, would margins be higher this time around?

All of it points to the idea that Caterpillar can easily maintain its dividend through the downturn. Moreover, Umpleby described the dividend as "a priority" during the earnings call. That's good news. But there are some warning clouds on the horizon.

Earlier in the call, Umpleby backed off the targets given on the investor day presentation in 2019 by saying, "[although] we expect our margins and free cash flows to be better than our historical performance of 2010 to 2016, it will be challenging for us to achieve the margin and cash flow targets communicated during our 2019 Investor Day."

Putting all of this in context, even if sales drop to the $39 billion achieved in 2016 then it's reasonable (based on Umpleby's comments) to expect FCF of more than the $2.7 billion achieved back then. However, the previously expected FCF low point of $4 billion (outlined on the investor day) no longer applies. This is a sign of stress.

Similarly, the first-quarter earnings -- which won't reflect the worst of the COVID-19 impact -- saw significant sales declines, and the risk factors outlined below aren't going away anytime soon.

What are investors to make of it

Caterpillar's dividend looks sustainable for now, and the stock remains a useful option for income-seeking investors. That said, the risk is rising, and the fact that management is backing off the targets it set just last year is a sign of just how badly the COVID-19 pandemic has hit global growth prospects.