Please ensure Javascript is enabled for purposes of website accessibility
Log In Help Join The Motley Fool
Free Article Join Over 1 Million Premium Members And Get More In-Depth Stock Guidance and Research
By Keith Speights - Updated May 6, 2020 at 8:56AM

You've probably heard by now of Gilead's promising COVID-19 drug, remdesivir. But there's another experimental drug that just might capture investors' attention in the near future.

Only one drug has thus far demonstrated the potential to be safe and effective at treating novel coronavirus disease COVID-19 in statistically valid clinical testing. Dr. Anthony Fauci, director of the National Institute of Allergy and Infectious Diseases (NIAID), even said that Gilead Sciences' (GILD 0.63%) remdesivir will be "the standard of care" for treating COVID-19. However, Fauci also stated publicly that remdesivir is only "the first step in what we project will be better and better drugs coming along."

Combinations of drugs sometimes referred to as cocktail therapies have been key in treating other serious viral diseases. Gilead itself has achieved impressive results in treating HIV and hepatitis C using therapies that combine more than one drug.

It's quite possible that this approach could prove to be effective in treating COVID-19. A small drugmaker, BioSig Technologies' (BSGM -1.82%) subsidiary ViralClear Pharmaceuticals, thinks that it has an experimental drug that appears to hold promise in fighting COVID-19 in combination with remdesivir. Could this under-the-radar biotech piggyback on Gilead's success? 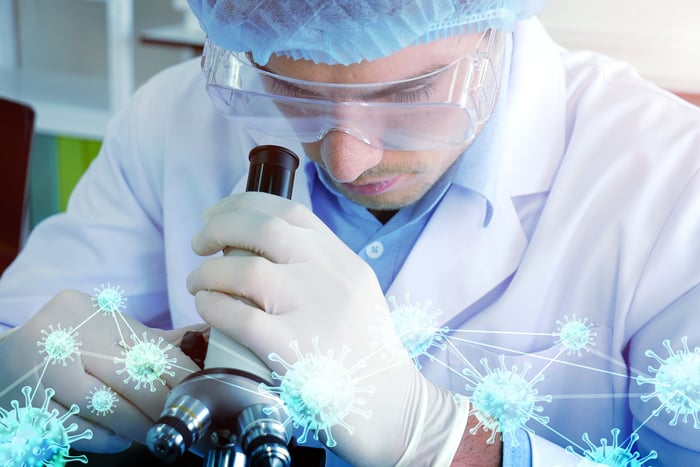 BioSig Technologies announced last week that an article had been submitted to an online peer-reviewed life sciences journal describing data from preclinical studies of a combination of ViralClear's experimental drug merimepodib in combination with Gilead's remdesivir. This preclinical testing was conducted at The University of Texas Medical Branch Galveston National Laboratory.

The article stated that the merimepodib/remdesivir combo reduced the replication of the novel coronavirus that causes COVID-19 to "undetectable levels" in laboratory testing. In other words, the combo therapy appeared to effectively halt the spread of the coronavirus. Other recent preclinical research of merimepodib as a monotherapy found that production of the novel coronavirus decreased by 98% during in vitro testing.

While Gilead's remdesivir is administered via an injection, merimepodib is taken orally. Merimepodib has also been tested in previous clinical studies in treating hepatitis C and psoriasis.

It's easy to become excited when we hear results like reducing replication of the novel coronavirus to undetectable levels and decreasing production of the virus by 98%. However, a lot of caution is needed -- especially for investors looking to profit from a potential COVID-19 treatment.

There's a long way to go from preclinical testing performed in a test tube to demonstrating that a drug is safe and effective in treating humans with COVID-19. Clinical studies are needed before merimepodib's safety and efficacy can potentially be established.

BioSig hopes to conduct such studies soon. In April, the company's ViralClear subsidiary filed for U.S. Food and Drug Administration (FDA) approval to begin a phase 2 clinical study evaluating merimepodib in treating COVID-19. Assuming the green light is given quickly by the FDA, ViralClear plans to initiate this study in the second quarter in cooperation with the Mayo Clinic. The company expects that initial results will be available within three months after the study begins.

But this study will only evaluate merimepodib as a stand-alone therapy in treating COVID-19. Although BioSig has stated in the past that the drug could be used in combination with other therapies in targeting the novel coronavirus disease, the company hasn't yet announced details on plans to study merimepodib in combination with remdesivir.

Still, it would be surprising if a merimepodib/remdesivir study isn't in the works in the not-too-distant future. The attention that Gilead's drug has gained is likely to attract plenty of companies seeking to test combo therapies.

A big opportunity -- and a big risk

So far, BioSig hasn't generated any revenue and has amassed significant losses. The company also only had $12.1 million in cash and cash equivalents at the end of 2019, bolstered by a $10 million common stock placement in February. It's highly likely that BioSig will need to raise additional capital in the future to fund operations.

All of this adds up to a big risk for investors who buy shares of BioSig right now. The reality is that this biotech won't be able to piggyback on Gilead's success. BioSig will have to earn success on its own.