In the United States, new drugs must make a long journey from the laboratory to the market. Once a promising new compound or treatment is developed, it must pass successfully through several stages of testing to ensure that it's both safe and effective, in varying degrees.

Specifically, the primary purpose of a phase 2 drug trial is to test the efficacy and appropriate dosage levels of a drug. In short, it answers two questions: Does it do anything, and if so, does it do what the developer wants it to do? 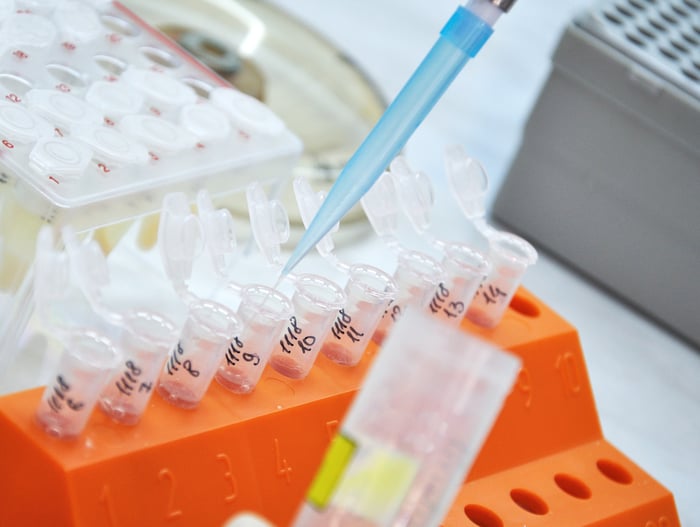 What happens during phase 2?

The first phase of a clinical drug trial typically involves testing it on a small group of people to see if it's safe. During a phase 1 trial, researchers will try to determine what side effects the drug has, if any, and what its appropriate dosage should be. Once a drug gets past the first phase of testing, it can move to phase 2, where effectiveness, dosage, and safety will be studied in greater depth.

Phase 2 drug trials are typically conducted on several hundred patients who have the disease or condition the medication is expected to treat. The patients who participate in phase 2 trials are typically divided into two groups: The first actually receives the experimental drug, while the second receives either a placebo or the current standard treatment for the condition. This second group is called the control group. These trials are often "blind," meaning neither the patients nor the researchers know which participants have received the experimental treatment and which are in the control group.

This method allows researchers to obtain the most accurate and reliable information about the safety and effectiveness of the drug in question. This data is then used to develop additional protocols for the next stage of testing.

Phase 2 drug trials typically take at least several months to complete, but they can last up to two years. According to the FDA, about 33% of drugs that reach phase 2 are deemed effective and reliable enough to move on to phase 3.

Investing in companies with drugs in phase 2 trials

For a pharmaceutical to have several phase 2 drugs in its pipeline can be a good thing or a bad thing from an investor's standpoint. On one hand, buying shares in a company with a number of phase 2 drugs could work out well if you get the stock on the cheap: If those drugs end up moving forward and eventually being approved for sale, then stock price will likely rise.

On the other end, if those drugs fail to make it past phase 2, then there's a good chance the company's stock price will drop as soon as news of their failure gets out. Whereas most phase 1 drugs wind up moving on to phase 2, only half as many make it from phase 2 to phase 3. And something like half of drugs in phase 3 trials don't pass final muster.

So, as is the case with any investment, it's important to weigh the upsides as well as the risks before investing in a company based on its pipeline of phase 2 drugs. Quite a few of those treatments will never make it to market.