Box (NYSE:BOX) posted fiscal first-quarter revenue growth of 13%, in line with guidance. Yet the bottom line came in better than expected thanks to reduced operating expenses. These results confirm that management's focus on improving profitability is taking shape, but that strategy will also have a negative effect on the top line.

The company offers a cloud-based platform that allows employees to manage their documents from anywhere. Thus, in the context of increased coronavirus-induced demand for work-from-home solutions, Box posted solid fiscal first-quarter results compared to its guidance.

The software-as-a-service (SaaS) vendor profited from the surge in demand from its existing customers for extra seats to allow employees to work from home.

As a consequence, the net retention rate came in at 107%, up from 106% a year ago and 104% last quarter, which means existing customers spent 7% more than last year. They also represented over 70% of bookings, up from about 66% historically.

These solutions that now integrate deeply with enterprises' workflows also increase Box's stickiness. Customers who have adopted at least one add-on product represented about 54% of recurring revenue during the last quarter, up from about 45% last year. 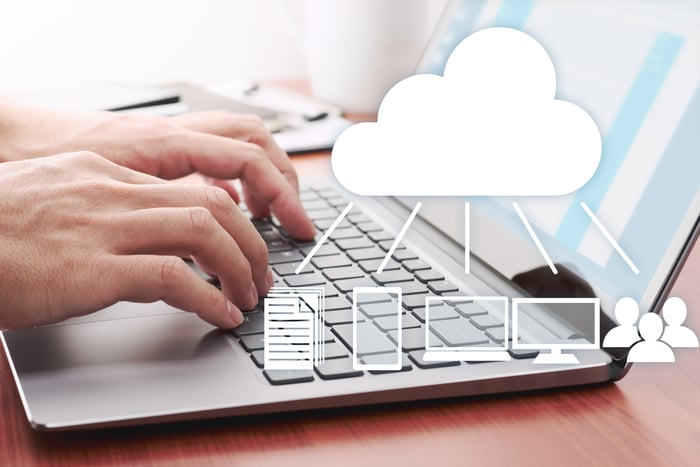 Box's growing profitability is partly due to greater efficiency in sales and marketing expenses, but investors should also expect revenue growth to slow.

During last year's investor day, management communicated its objective of improving combined revenue growth and free-cash-flow margin to 35% by fiscal 2023, up from 16% last year. That target means management will be balancing profitability against revenue growth over the next few years.

You should keep in mind that free cash flow excludes share-based compensation (SBC), though. Granted, SBC is a non-cash expense, but it remains a significant cost for shareholders as it represented 21.8% of revenue during the last quarter. Those SBC expenses also explain most of the significant difference between the company's non-GAAP (adjusted) and GAAP earnings.

In any case, the full-year updated guidance indicates the balance is shifting toward improving profitability against a lower revenue growth outlook compared to previous forecasts.

That trend remains in line with the company's performance over the last several years, though. With scale, sales and marketing expenses as a percentage of revenue have been decreasing, which bodes well for profitability and free cash flow. But revenue growth has been decreasing too. 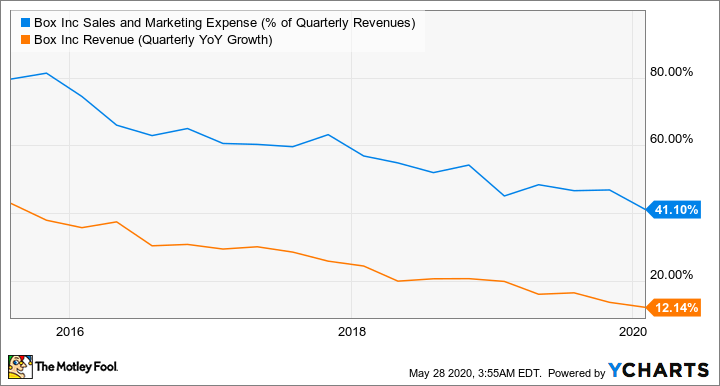 Based on the midpoint of management's full-year revenue guidance, the market values the company at an enterprise value-to-sales ratio of 4.1.

Compared to other growth stocks, that valuation seems reasonable. In addition, Box's competitor Dropbox, which is also shifting to a cloud platform model, is valued at a higher enterprise value-to-sales ratio, close to 5. But Box's lower valuation is due to its inferior revenue growth and profitability. 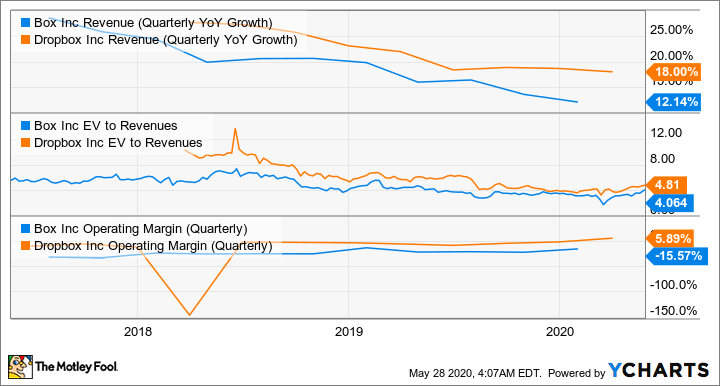 Besides, since Box's revenue growth should decelerate over the next several years as the company plans to improve its margins, its apparently modest valuation doesn't represent a bargain. Prudent investors should stay on the sidelines as long as revenue growth is decelerating and GAAP profits still seem far away.