Please ensure Javascript is enabled for purposes of website accessibility
Log In Help Join The Motley Fool
Free Article Join Over 1 Million Premium Members And Get More In-Depth Stock Guidance and Research
By Herve Blandin – May 13, 2020 at 8:30AM

The cloud company looks cheap based on management's long-term plan, but investors should remain cautious.

With its enterprise value that represents less than nine times management's forecasted free cash flow of at least $1 billion in 2024, Dropbox (DBX 0.93%) looks like a cheap software-as-a-service (SaaS) growth stock. In addition, its first-quarter results indicate the impact of the coronavirus pandemic seems limited, as full-year guidance stays valid (with minor currency and interest rate adjustments).

However, investors should remain prudent: The company is transitioning away from its legacy, now commoditized, core business; and management's long-term goals exclude some important costs.

From cloud storage to collaboration

Dropbox's legacy activity consists of providing storage for users to host their files in the cloud and access them from anywhere. But that business is being commoditized as giant competitors offer such services for free or at low cost. For instance, Alphabet's Google Drive provides 15 GB of free data storage, and Google One's offerings start at 100 GB of storage for $1.99 per month.

In addition, Dropbox's revenue growth has been decelerating over the last several years because of its growing scale. And the confirmed full-year guidance, which corresponds to 13.2% year-over-year revenue growth at the midpoint, indicates that trend should continue this year. 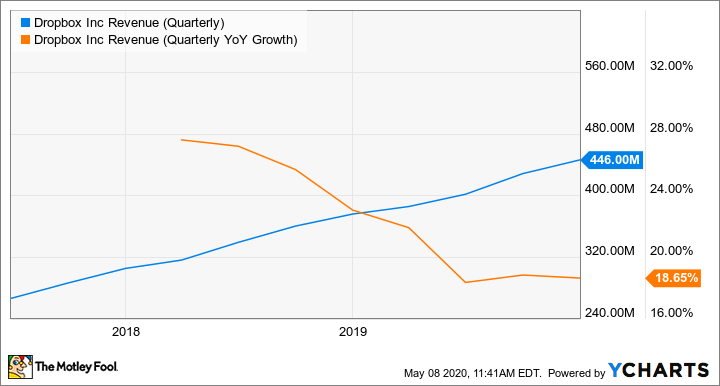 As a result, Dropbox is transforming its legacy cloud storage business into a collaboration platform that integrates some other cloud-based services such as Slack Technologies' collaboration software and Zoom Video Communications' video communication tools. Dropbox also acquired HelloSign last year to enhance its portfolio with e-signature capabilities.

Given these initiatives, management said during the fourth-quarter earnings call it maintained its target of double-digit revenue growth over the long term.

The company can pull several levers to realize that strong revenue growth. With only 14.6 million paying users during the last quarter out of more than 600 million total users, the potential to increase the number of paying users remains important. Also, the company can leverage its cross-selling opportunities to grow its revenue per user.

However, since the competition against Microsoft's and Google's collaboration products -- among many others -- is intensifying, Dropbox's long-term double-digit growth is an open question.

Don't be fooled by non-GAAP metrics

During the first quarter, Dropbox posted profits under generally accepted accounting principles (GAAP) for the first time. And in contrast with many growth stocks, management expects the bottom line to remain positive in 2020.

Dropbox reached profitability thanks to its low sales and marketing expenses -- 22.9% of revenue during the last quarter -- as it realizes more than 90% of its sales through its self-service website and applications.

With scale, management forecasted non-GAAP operating margins to improve to a range of 28% to 30% and annual free cash flow to exceed $1 billion by 2024.

However, you should take those ambitious goals with a grain of salt: These non-GAAP metrics exclude many costs such as share-based compensation (SBC). Estimating the portion of these costs as a percentage of revenue by 2024 remains difficult, but last-quarter results give an indication of the potential difference between the company's GAAP and non-GAAP operating margins.

Similarly, free cash flow excludes SBC and some other costs. Granted, SBC is a noncash expense, but it represents a real cost to shareholders as it increases the number of shares (dilution).

Is Dropbox a buy?

The market values Dropbox at an enterprise value-to-sales ratio of 4.5, based on the midpoint of full-year revenue guidance, which seems reasonable if the company delivers the forecasted double-digit revenue growth and improving margins by 2024. However, that valuation doesn't offer any margin of safety as it depends on flawless execution over the long term against giant competitors such as Microsoft and Google.

Thus, Dropbox is a buy only for investors convinced that management will deliver results according to its ambitious long-term plan.