Nike (NYSE:NKE) posted robust growth in its digital business last quarter, but it wasn't enough to offset the losses at physical stores. Overall, total revenue dropped 38% year over year due to store closures.

During the conference call, management laid out a long-term growth roadmap, outlining specific areas where Nike will be investing during this downturn. Three areas mentioned were opportunities to gain market share in apparel, particularly in the women's category, in addition to efforts to expand the Jordan Brand product line. 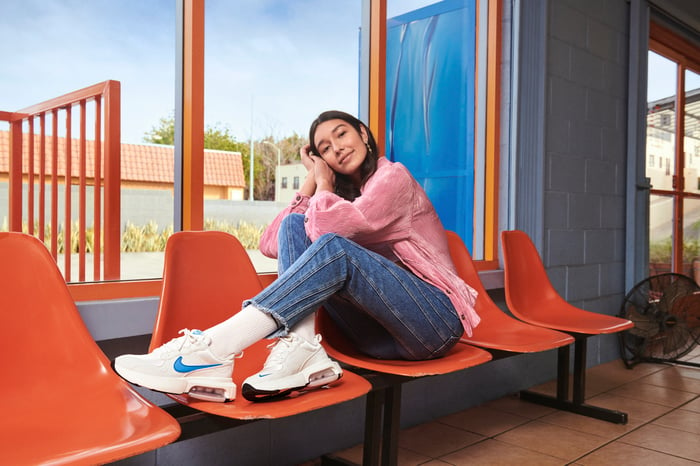 Nike has less than 10% market share of the women's apparel market in the U.S., but the company's women's business grew twice as fast as the men's category last quarter.

On a wholesale-equivalent basis, women's revenue was $7 billion in fiscal 2020, which ended in May, or 23% of total wholesale revenue. That represented a decline of 3% year over year on a currency-neutral basis. But it's revealing that the women's segment grew slightly faster than the men's category, which totaled 54% of total wholesale revenue and slid 4% for the full year. This trend has been consistent over the last four years with women's wholesale revenue usually posting higher growth rates than men's.

The COVID-19 crisis has accelerated Nike's digital momentum, which is providing a boost to its women's and apparel growth. Nike's digital sales grew 79% on a currency-neutral basis last quarter. Digital sales now total 30% of Nike's business.

Through its apps, including Nike Training Club and SNKRS, Nike has placed an emphasis on building membership around the brand. Nike acquired 25 million new members during the quarter, more than doubling year over year. Half of those new members were women, which CEO John Donahoe said "is a very encouraging sign."

The Jordan Brand generated $3.6 billion of wholesale equivalent revenue in fiscal 2020. Air Jordan sneakers remain a hot item in the footwear market, even after more than 20 years since Michael Jordan wore a Chicago Bulls uniform. Nike's wholesale revenue from the Jordan Brand has risen sharply from $2.3 billion in fiscal 2015.

Despite the recent store closures around COVID-19, the Jordan Brand finished fiscal 2020 with revenue up 16% year over year -- by far Nike's fastest-growing category. Donahoe said, "The Jordan Brand resonated deeply" in the fiscal fourth quarter. He credited ESPN's The Last Dance documentary about the legendary basketball star for driving a strong sell-through of the AJ5 Fire Red sneaker.

Moreover, Donahoe said strong demand from women partly explains Jordan's performance. "Women's has played a key role in Jordan's growth, and we see significant opportunity for Jordan to achieve even greater scale as we create more products for women, expand lifestyle offerings, and grow the business internationally," he explained. 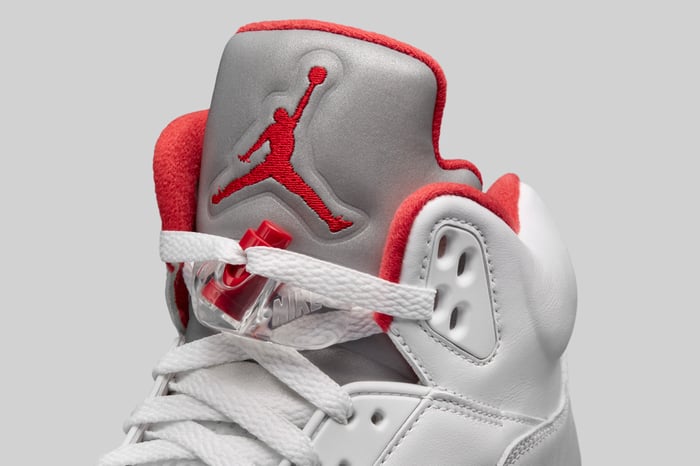 Nike's DNA is footwear, but management sees broad opportunities across the apparel category, which comprised 31% of the business in fiscal 2020. During the call, Donahoe discussed a new approach Nike is taking to simplify and realign inventory around how consumers are shopping across men's, women's, and kid's categories.

"We know that our consumers don't see themselves as only runners or yoga practitioners," Donahoe said. "They don't think in terms of performance vs. sportswear. Instead, we know how they shop: across men's, women's, and kids."

With this approach, Nike is going down a similar path as lululemon athletica, which has had tremendous success marketing certain products for non-workout occasions.

Most importantly, Donahoe said this new strategy will help "simplify our organization and focus more of our resources on the capabilities and opportunities that will forge our future." By simplifying, Donahoe seems to be suggesting that these adjustments could be margin-enhancing for the business, in addition to adding incremental sales opportunities.

Nike gained market share in footwear and apparel last quarter. CFO Matt Friend said that Nike became "the No. 1 apparel brand during Q4 in key markets for the first time."

The next few quarters will continue to show declines on the top line but not as severe as last quarter as Nike continues to reopen stores. Management said about 85% of stores have reopened as of June 25, and the company expects strong growth in the fiscal third and fourth quarters, which should lead to flat to positive growth in revenue for fiscal 2021.

Nike is a massive business with $37.4 billion in sales in fiscal 2020. But the opportunities in women's, apparel, and the Jordan brand suggest that this top retailer can continue growing for a long time. After all, that top line figure is only about 10% of the global sportswear market.