Please ensure Javascript is enabled for purposes of website accessibility
Log In Help Join The Motley Fool
Free Article Join Over 1 Million Premium Members And Get More In-Depth Stock Guidance and Research
By Jeremy Bowman – Jun 28, 2020 at 11:00AM

During a difficult time, the sportswear giant is focused on increasing direct connections to customers.

After a dismal fourth quarter, Nike (NKE -12.81%) is looking to the digital channel to pull out of the COVID-19 pandemic.

Shares were down modestly Friday morning as the sportswear giant posted a wide loss in its fiscal fourth quarter as well as plunging revenue. Both results were much worse than expected.

Revenue fell 38% in the quarter, well below the analyst consensus at $7.5 billion, as the company said that 90% of owned and partner stores outside of China were closed for about eight weeks of the quarter due to the pandemic. That led to a loss per share of $0.51, which compared to per-share profit of $0.62 in the quarter a year ago and analyst expectations of a $0.09 per-share profit.

So far, Nike stock has escaped any serious damage from the crisis, even though the company is taking a direct hit from the pandemic like much of the consumer discretionary sector. Investors instead have been willing to look past the crisis and focus on Nike's competitive advantages and its ability to emerge in a stronger competitive position, taking market share on the way. Its digital strategy is the biggest reason why.

With stores closed across much of the world, Nike saw digital sales shine in the quarter, rising 75%, or 79% on a currency-neutral basis, and making up 30% of total revenue. Given the impact of the pandemic on consumer shopping habits, Nike is now accelerating its digital initiatives, and management spent much of the earnings call focused on the digital business. 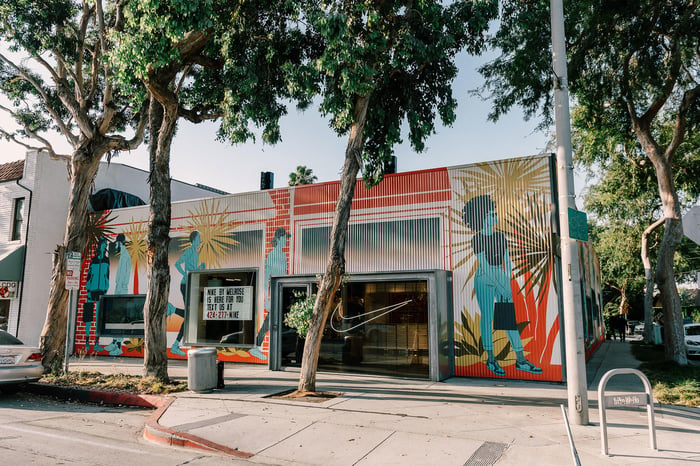 The front of a Nike Live store in LA. Image source: Nike.

In 2017, Nike announced a new strategy called the Consumer Direct Offense, focused on streamlining its direct relationships with customers through digital portals like its apps and websites, and Nike-owned stores in major cities around the world.

Now, the company is doubling down on that strategy with what it's calling the Consumer Direct Acceleration, as CEO John Donahoe shared on the call, and management set a number of bold goals around the digital acceleration.

The strategy hinges on what the company calls the marketplace of the future where stores will center around the digital strategy, making online and in-store shopping seamless, embracing new experiential technologies, and leveraging the data the company's gained through its membership programs and digital storefront. By focusing on membership, Nike has used its digital and direct platforms to deliver loyalty rewards to its members, and refine and strengthen connections with individual consumers, creating a virtuous cycle in the business.

Finally, the company will increase investments in technology in areas like demand sensing, which follows its acquisition of Celect, inventory management, and product innovation.

Despite the setback from the COVID-19 pandemic, Nike is fast evolving with the changing nature of retail as it shifts from a broad wholesale model to one more focused on direct selling through digital platforms and experiential stores like Nike Live, which are service hubs and stores designed for Nike Plus members.

Those investments have clearly paid off, and the Consumer Direct Acceleration should build on the gains from the Consumer Direct Offense. Despite the weak results in the fourth quarter, there were a number of positive signs that point to the company's recovery. In addition to the strong performance in digital, sales returned to growth in China, rising 1% on a currency-neutral basis. Momentum increased in June as stores reopened and digital growth remained strong, rising by triple digits in some markets, even as shoppers returned to stores. That gives the company faith that sales will continue to shift to the digital channel.

Nike expects headwinds through at least the first half of the current fiscal year as it works through excess inventory, reopens stores, and deals with uncertainty around the pandemic. The company said it was targeting flat revenue growth for the year. While the challenges from COVID-19 aren't over, the sportswear giant is putting itself in position to successfully emerge from the crisis by building connections with customers and investing in digital. It may be a few quarters before the company returns to growth, but the long-term opportunity for the company looks as promising as ever.