Shares of Walt Disney (NYSE:DIS) dropped 22.9% in value through the first six months of the year, according to data provided by S&P Global Market Intelligence. It was far worse at one point, with the stock down more than 36% year to date in late March.

Disney had a busy start to the year with the growth of Disney+ and the introduction of new CEO Bob Chapek in late February. Then everything came to a screeching halt in March because of COVID-19: Disney closed its theme parks and retail stores, stopped cruise ship sailings, and delayed its upcoming movie releases. With much of the business shut down, the stock fell sharply before rebounding in April. 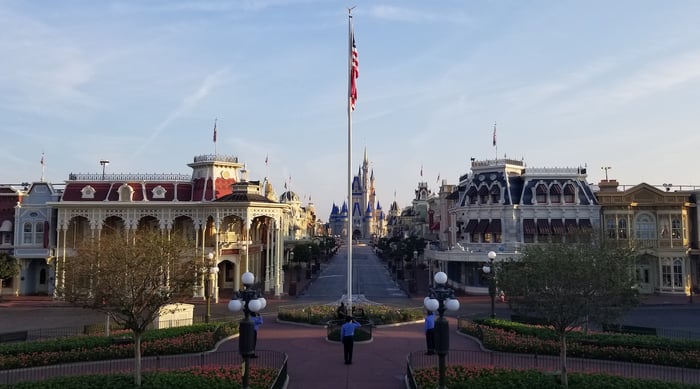 Disney was also forced to delay, cancel, or shorten theatrical releases. However, it released a couple of movies, such as Frozen 2 and Artemis Fowl, early on Disney+ to satisfy viewers and help boost demand for the streaming service. Disney+ had 54.5 million subscribers as of May 5.

Disney should have a better second half of the year. Last month, it announced a planned reopening of Walt Disney World theme parks starting in July.

The delay of its movie releases just means there will be a busy release schedule for the second half of the year. Disney's Mulan will release in August, and Marvel's Black Widow will release in November. There are several other releases coming from 20th Century Studios, which Disney acquired last year as part of the deal with Twenty-First Century Fox. Disney's studios segment brought in $11.1 billion in revenue in fiscal 2019.

While traffic trends at theaters and theme parks is uncertain, Disney+ should continue to maintain its momentum. The service will launch in Latin America and several more places in Europe later this year.

Over the last three months, Disney stock has drifted up 21%, as investors start to look forward to the reopening of parks and this media stock's digital future across Disney+, Hulu, and ESPN+.