Uber Technologies (NYSE:UBER) was not too happy when Grubhub (NYSE:GRUB) decided to sell its business to Just Eat Takeaway. The two had been discussing a merger, and had reportedly come to an agreement on an all-stock price. Just Eat Takeaway offered a similar price, however, and Grubhub's owners felt the partnership made for a better exit.

Uber certainly had the resources to outspend Just Eat Takeaway, but it decided to let the deal go. It instead focused on a smaller competitor in the U.S. food delivery space: Postmates. Uber has agreed to acquire Postmates for $2.65 billion in an all-stock deal.https://investor.uber.com/news-events/news/press-release-details/2020/Uber-to-Acquire-Postmates/default.aspx

Postmates had just an 8% market share in May, according to data from Second Measure. But the smaller delivery service can offer a lot of the same benefits the potential Grubhub acquisition offered, and it has a few meaningful advantages as well. 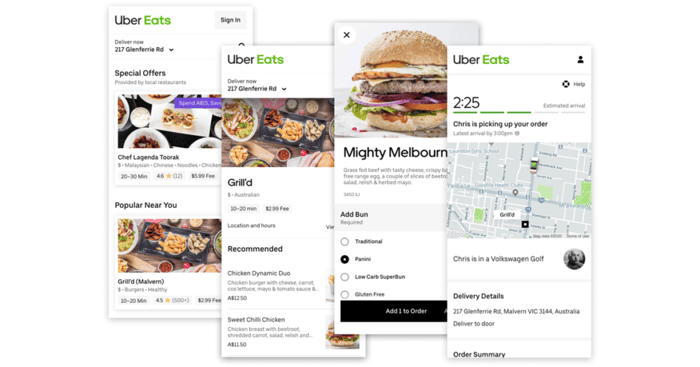 One of the biggest hangups for Grubhub in its negotiations with Uber was the potential for antitrust regulators to block the acquisition. Grubhub and Uber are the No. 2 and No. 3 food-delivery services in the U.S., and combining them would put about 90% of the market in the hands of two companies: Uber and DoorDash.

Since Postmates is relatively small, the competitive dynamics won't change much on a national level. There will still be three big nationwide services all vying for customers.

Less regulatory scrutiny means Uber will be able to close the deal faster and potentially save money on legal fees. There's also less risk of having to divest assets to a competitor as part of the deal, which gives Uber a clearer path to moving forward.

Postmates only has a small share of the food-delivery market, but it has significant presence in several key markets. For example, it's the market leader in Los Angeles, where Uber's currently in fourth place.

Uber's strategy with Uber Eats is to become the No. 1 or No. 2 player in whatever markets it participates in. But the U.S. is a massive and fragmented market when it comes to local delivery. Examining market share by metropolitan area makes a lot more sense, and that's where Postmates can still provide a lot of value.

Postmates has a stronger presence than Grubhub in several markets, including L.A., Phoenix, and Miami, and pushes Uber to the No. 1 or No. 2 spot in quite a few metro areas.

One thing Postmates offers that Grubhub doesn't is a business outside of restaurant delivery. Postmates has partnered with liquor stores, grocery stores, apparel retailers, and others for same-day delivery of things that aren't just restaurant orders.

The accelerating shift toward e-commerce and niches like online grocery could increase demand for services like Postmates. Granted, there are lots of other competitors in the field -- Instacart or Target's Shipt, for example -- but Uber has a lot of potential to take on those services thanks to its existing network of couriers and drivers.

As a growth stock, investors should be looking for ways Uber can provide scale to businesses in order to make them profitable. Expanding Postmates' non-restaurant business is one such opportunity. Building on Postmates' existing partnerships with non-restaurants will allow Uber to test its technology and determine best practices for scaling the business to more markets a lot faster than if it tried to build the service itself.

While adding the scale of Grubhub would've been an instant boost to Uber's network and margins, Postmates could be more than just a consolation prize.