NASA's Mars 2020 Perseverance mission blasted out of Cape Canaveral at 7:50 a.m. EDT this morning as the United Launch Alliance-built Atlas V rocket carried a Perseverance rover on its way to the Red Planet.

If all goes as planned, Perseverance will land on Mars on February 18, 2021 to begin exploring the Jezero Crater for signs of life. 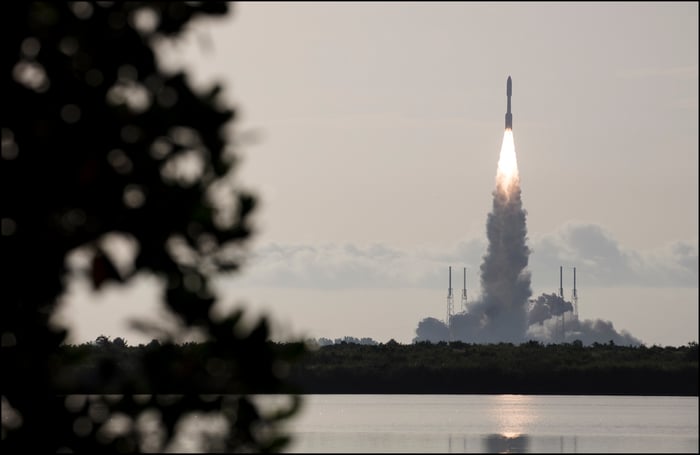 Helping Perseverance with that mission will be a flying helicopter drone built by AeroVironment (NASDAQ:AVAV).

Perseverance will travel swiftly to Mars -- taking just seven months to travel door to door -- but the Perseverance rover is not a particularly fast vehicle. It will trundle across the Mars surface at a speed of less than one-tenth of one mile per hour, which is still faster than the Curiosity rover that preceded it. (Curiosity moves at about two miles per year.)

Still, to help Perseverance explore more ground more quickly, NASA contracted tech specialist AeroVironment to help it build the first-ever flying aircraft to visit another planet. The drone, dubbed the Mars Helicopter Ingenuity, is basically a small cube containing sensors and a wireless antenna, with a solar panel and two four-foot-long, counter-rotating rotors, and four spindly legs on the bottom.

Ingenuity is specially designed to fly in a thin Martian atmosphere that is just 1% as dense as Earth's atmosphere at sea level. For a drone, it's tiny -- just 19 inches tall and weighing about four pounds on Earth. On Mars it will weigh about a pound and a half.

Ingenuity will recharge from solar power and hopefully will be able to collect enough juice to power at least one 90-second flight per month. Each flight will travel about 980 feet total at an altitude of no more than 15 feet.