These 2 stocks have a lot to lose from the pandemic forcing a delay in the football season.

News reports have been coming in steadily on the chances of major college football games being played this fall. So far, the Pac-12 and Big Ten conferences have both announced the postponement of their seasons until at least the spring. The remaining Power Five football conferences -- the Big 12, Atlantic Coast Conference (ACC), and Southeastern Conference (SEC) -- are, for now, all planning to play their own seasons this year.

The stocks with the most to lose

Walt Disney (DIS 4.44%) owns a large chunk of the broadcasting rights to the Power Five conferences in part due to its $71.3 billion acquisition of Fox in 2019. The combined entity has long-term TV contracts in place with the Big Ten, Big 12, ACC, and Pac-12. Combined, Disney shelled out $8 billion for these rights. 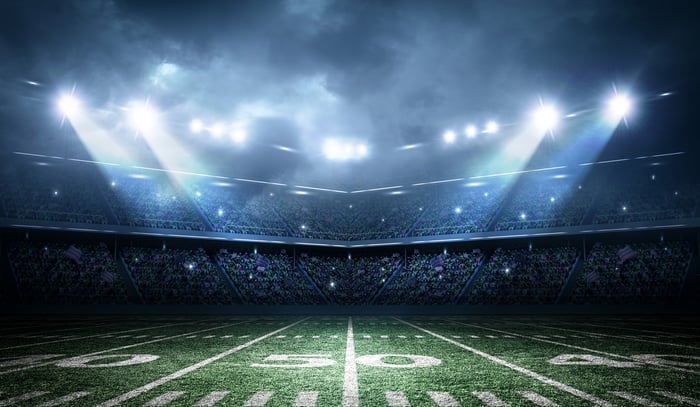 To use the ACC as an example, Disney pays the conference $155 million annually for the media rights to its football games. If no season happens as scheduled, Disney will still be under contract but will enjoy none of the associated revenue, at least until the postponed seasons are actually played.

ViacomCBS (VIAB) (NASDAQ: VIAC) is also threatened by any potential college football postponements. It pays the SEC $55 million a year for its broadcasting rights. Fortunately for ViacomCBS, it does not own the broadcasting rights to the Big Ten or Pac-12, the two conferences that have already announced season delays.

Still, the SEC football season this fall is not yet a sure thing. Starting in 2023, Disney will also own SEC football rights by bumping the annual payment from Viacom's $55 million payment to $400 million. Clearly these games are valuable.

Fortunately for broadcasters, none rely on fans in the stands to generate sales. They simply need people to watch on TV to realize advertising revenue. Furthermore, universities have a large financial incentive to make a college football season happen. Power Five schools collect 60% of revenues from college football. Delayed games would be a crushing blow not only to Disney and Viacom, but also to the finances of colleges across the nation.

If a season can be played safely, I believe it will be. But that is a giant "if." The amateur status of college athletics makes a return to playing much more complicated than for the pros, who are paid like any other contracted employees and have the choice of opting out for the season. The continuing virus spread exacerbates the challenge. Disney and (to a smaller extent) ViacomCBS have a lot to lose from postponements of college football games, and it seems like that is a growing possibility.