The S&P 500 Index (^GSPC -1.51%) gained 46.7 points, or a solid 1%, on Aug. 12, joining the other major indices with a better-than-1% gain on the day, following the announcement yesterday evening that presidential hopeful and former Vice President Joe Biden had made his choice for running mate. Kamala Harris, the U.S. senator from California, is joining the Biden ticket as the Democratic nominee for vice president.

On a day that lacked any major earnings or economic news, the Harris announcement is the biggest market-moving news of the day. Today's best-performing S&P stocks were semiconductor giants Advanced Micro Devices (AMD -1.22%), Qualcomm (QCOM -1.62%), and NVIDIA (NVDA -0.66%), up 7.5%, 6.4%, and 5.4% today as investors look to profit from strong demand for microchips. 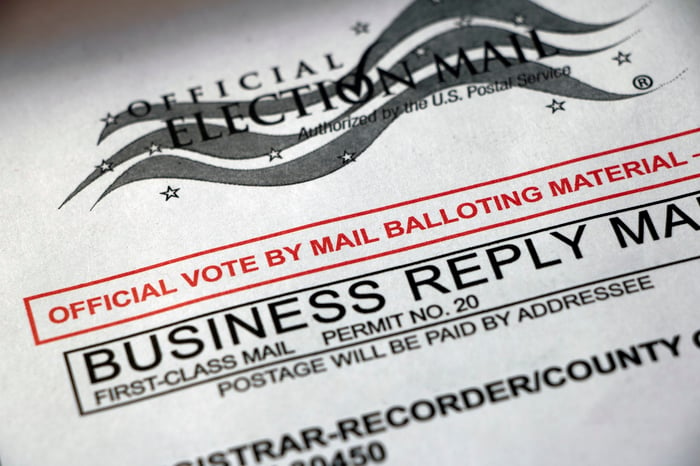 The gains were broad, with well over 300 of the S&P 500's 505 component stocks moving higher, seven sectors gaining 1% or more on the day, and only the finance sector falling.

Without making this a political conversation, today's market reaction is likely at least partly due to the general view that Harris, who served as a prosecutor in California before her career in elected office, is more moderate in her fiscal views, while being socially liberal.

There's certainly worry from the financial sector, as evidenced by the decline in many financials and bank stocks on the day. When she served as California attorney general, Harris played a major role in holding banks accountable for their role in the housing crisis a decade ago. California was one of the hardest-hit states in terms of foreclosures.

Looking beyond Harris directly, it's likely that investors also viewed her as a preferable candidate to other high-profile possibilities with positions that could have a bigger impact on business profits. Not only does the choice speak to her political leanings, but it offers some indication where a Biden campaign, and potential presidency, will put its priorities.

Put it all together, and the market values predictability. Now that the major tickets are clear, investors can start to price in their expectations based on who is most likely to take the White House come November.

Chipmakers surging on the upcycle

Demand for microchips is strong, and AMD, NVIDIA, and Qualcomm are all surging higher. Since the market bottom in late March, they've absolutely crushed both the broader S&P 500 and the NASDAQ Composite: 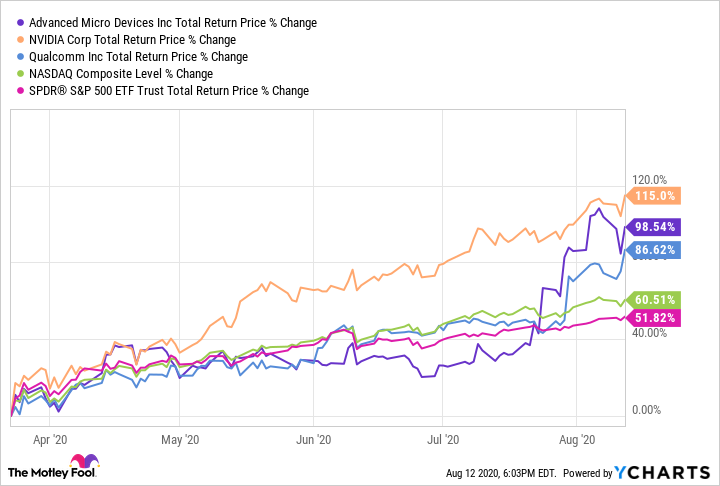 At the same time, chip giant Intel (INTC -2.31%) has stumbled, with shares down 17% so far this year and about flat since the 2020 market bottom as the company falls behind AMD on its next-gen chipset.

But investors shouldn't sleep on Intel, especially if it gets its act together. You shouldn't disregard its rallying competitors, either. The future looks bright for the entire sector.

Two of the "Power Five" college athletic conferences said they would not be playing football this autumn, with the PAC 12 and Big 10 making announcements this week. So far, the Southeastern Conference, Atlantic Coast Conference, and Big 12, however, have made no such announcements. To the contrary, the Big 12 announced its scheduling plans this week, while both SEC and ACC officials have said they still intend to play, but will follow the advice of medical advisors.

Looking beyond the health risk implications to players, officials, coaches, and training staff, there are financial implications for Disney (DIS -3.20%), which owns both ESPN (home of the major conferences) and Fox broadcasting. The loss of a fall college football season would remove some of Disney's most valuable content; however if the three remaining major conferences do move ahead with games in the fall, Disney could face even higher-than-usual viewership -- boosting ad revenue -- with more people choosing to stay at home and looking for entertainment.

Like politics, let's not wade into the ethical or health implications. Either way, Disney's sports networks could face some serious programming challenges on Saturdays come September.