The company now has $1.5 billion in investments, says it's selling to many meat eaters.

Impossible Foods, one of the beefiest competitors of well-known imitation meat-maker Beyond Meat (BYND 2.85%), just secured another $200 million in funding for its war chest, and hedge fund Coatue was a major contributor. The latest infusion of funding raises the company's total investment since 2011 to approximately $1.5 billion. Nearly half of the money, around $700 million, has been raised this year, with an even bigger round of investments in March.

Some funds have been funneled into aggressively boosting the retail footprint of the company's plant-based burgers and other imitation meats. A series of partnerships have put the vegan "meat" onto the shelves of thousands of stores this year, most recently 1,252 outlets of the successful southeastern U.S. grocery chain Publix. 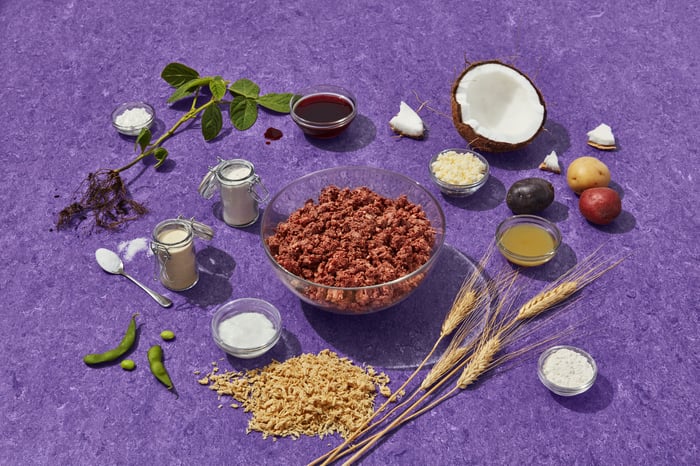 According to Impossible Foods Chief Financial Officer David Lee, the company plans "to create plant-based upgrades for every major category of animal-derived food products," before adding that the most recent "investment will allow us to continue to develop and commercialize the technology that will enable that transformation."

Queried about the possibility of an initial public offering (IPO) by MarketWatch, Lee spoke of "the need for every option to fund this global operation," but offered no specific date. He instead emphasized that Impossible Foods currently focuses on generating market demand, saying the company observes "great signs that our product is being accepted by meat eaters, who are voting with their stomachs."

The company's initiatives include research and development designed to produce plant-based faux milk, pork, and steak to join the flagship Impossible Burger and similar products. So far, Impossible Foods seems to be investing its money with dexterity -- driving sales and generating popularity in its ongoing struggle with other faux-meat brands.

Short Interest for Beyond Meat Remains High. Is There Hope Left for the Stock?
415%