The plant-based burger maker, still on a roll, partners with Publix after an outstanding Q2.

Gaining some southern exposure to help grow its sales, Impossible Foods, plant-based burger maker and prominent rival of Beyond Meat (BYND -0.14%), announced a new partnership with Publix yesterday. The deal will put its soy-based meat substitutes on the shelves of 1,252 Publix stores, making the vegan-friendly food available at a grocery chain with a strong presence across seven southeastern states.

The news comes just days after Impossible Foods finalized placement of its Impossible Burgers in the meat section of 2,100 Walmarts nationwide. Just as in the case of Walmart, 12-ounce packages of Impossible Burger will appear in the meat section of Publix. Research suggests this placement, rather than displaying the plant-based protein patties in the vegetable or frozen food section, may boost sales as much as +23%. 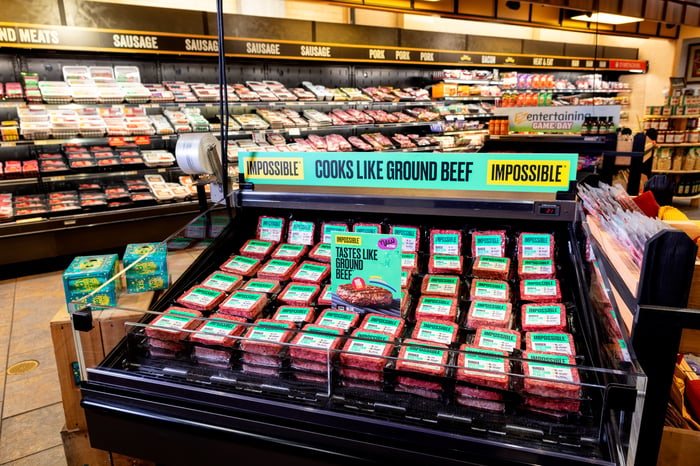 Publix reported its second-quarter 2020 financial results yesterday, stating it "estimates its sales for the three months ended June 27, 2020 increased approximately $1.5 billion or 16.1% due to the impact of the coronavirus pandemic." The popular, employee-owned supermarket company also noted comparable-store sales, or comps, for the first six months of 2020 jumped +17.1% overall. While only employees can own shares, the company's strongly positive comps and revenue gains may bode well for Impossible Burger sales there.

Impossible Foods notes Publix is applauded "for its top-quality meat department" before quoting Impossible's President Dennis Woodside, who said, "Impossible Foods' fans are passionate, vocal advocates. Many of them have been specifically asking for Impossible Burger to come to Publix." The plant-based burgers go on sale today, with Impossible observing its retail footprint has now expanded sixtyfold since the year's beginning.