The partnership has been three years in the making.

Another brand of plant-based burgers is coming to the shelves of Walmart (WMT) on a large scale, according to a press release from Impossible Foods, a leading maker of meat substitutes in the USA and elsewhere. Packages of Impossible Burger, which the company describes as its "flagship product," will soon be on offer in the retail giant's meat section, and will also be available for delivery or for pickup at Walmart store locations.

Impossible Foods notes stocking of its 12-ounce Impossible Burger packages in over 2,000 Walmart stores and supercenters will boost the number of physical locations selling its products in America to more than 8,000 in total. According to the company, this is a fifty-fold increase in its brick-and-mortar retail presence since March of this year. 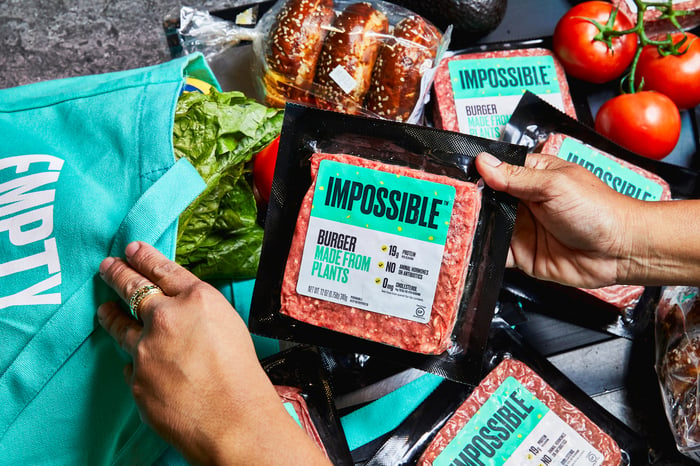 Impossible Foods' Chief Executive Officer Patrick Brown noted that Walmart is a primary source for Americans to buy meat. He added Impossible Foods is "confident that once Walmart customers try Impossible, they'll become enthusiastic advocates of our products and mission." According to Plant Based Foods Association and Kroger Co. research, the choice to place the Impossible Burgers in Walmart's meat aisle could improve sales, with purchases of plant-based meats 23% higher when they are stocked in that section rather than elsewhere in grocery stores.

According to Impossible Foods' Chief Financial Officer David Lee, who described the new partnership as "an important milestone, because we are ready now to serve the masses at scale," negotiations between Walmart and Impossible Foods have been ongoing for over 3 years during the lead-up to the current pact.

Impossible Foods' major rival Beyond Meat (BYND -4.38%), which also sells plant-based meat substitutes at Walmart and other grocers, saw its share value drop by about 2% in trading on Thursday following the news release.