If you were wondering: No, the marijuana industry hasn't lost its allure. Although the Horizons Marijuana Life Sciences ETF fell 36% in the past year, some pot stocks have reported impressive sales. With national elections on the horizon and marijuana legalization initiatives on the ballot in few U.S. states, investors are optimistic about the industry's room to grow. Medical cannabis is already legal across Canada, in 33 U.S. states, and the District of Columbia. The market should expand even more as marijuana-related therapies offer patients benefits that conventional therapies have failed to provide.

Investors are rightfully hesitant to bet on U.S. pot stocks. Because marijuana is still illegal at the federal level in the U.S., Canadian companies tend to be the safer choice for curious stock pickers. But a few domestic companies, like Green Thumb Industries (OTC:GTBIF) and Curaleaf (OTC:CURLF), have outperformed their counterparts to the north this year. While Aurora Cannabis and Canopy Growth have fallen by 60% and 20% this year, respectively, Green Thumb and Curaleaf have gained 57% and 42%. The market, tracked by the SPDR S&P 500 ETF, has gained about 5%. Let's dive deeper into these two U.S. cannabis stocks. 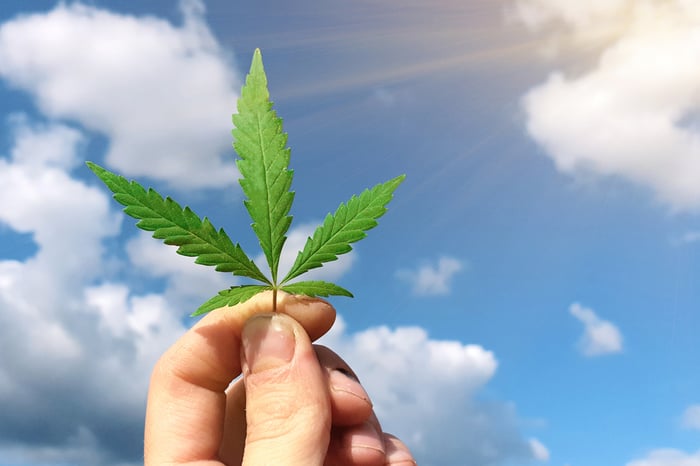 Green Thumb is a rising star

Green Thumb's second-quarter results, ending June 30, show the serious strides it made in sales this year. Revenue grew by 167% to $119.6 million from the year-ago period, and sales sprung up by 16.6% from the first quarter alone. Its positive adjusted-EBITDA (earnings before interest, tax, depreciation, and amortization) of $35.4 million is higher than its EBITDA of $2.3 million in the year-ago quarter. Management attributed the increase to strong demand for cannabis, which they say "continues to behave like a consumer staple."

Green Thumb categorizes its revenue stream into consumer packaged goods and retail businesses. An increase in transactions at retail businesses were the primary driver of its second-quarter results. Sales growth for the quarter exceeded 75% in its base of 16 stores. Rise, Essence, 3C, Bluepoint, and FP Wellness offer access to guidance from professional cannabis pharmacists in addition to packaged products. The consumer packaged business includes the various cannabis-related products such as edibles, vape pens, cannabis strains and flowers, CBD (cannabidiol) skincare products, and pre-rolls. Sales of these consumer packaged goods were up 21.6% from the previous quarter.

The company has opened six retail stores this year, bringing its storefront total to 48 in 12 U.S. states. It has a strong footing in its home state of Illinois, where it opened its eighth store at the end of May. Since Illinois legalized recreational cannabis in January, in-state sales have skyrocketed. Green Thumb brought in $39.2 million in January, which jumped to $47.6 million in June and a record-breaking $61 million in July.

Like many cannabis companies, Green Thumb has historically used debt to finance its operations. However, the company continues to improve its liquidity position. Green Thumb ended the quarter with cash and cash equivalents of $82.9 million, up from $46 million in Dec. 2019, with total debts at approximately $92 million. The company's cash pile will be used to build out its retail infrastructure, act on long-term expansion goals, and reduce its reliance on debt-financing.

Curaleaf is getting stronger

Curaleaf is a vertically integrated multi-state cannabis company that manufactures and supplies medical and recreational products. Vertical integration has allowed the company to mitigate costs and regulatory risks across its entire supply chain. A new series of aggressive acquisitions over the past 7 months are also part of its strategy to remain a leader in the rapidly evolving U.S. cannabis market.

In the second quarter, which ended June 30, Curaleaf's total revenue grew to $117.5 million, a 142% year-over-year increase. Revenue also jumped 16% from $96.4 million in Q1 2020. Adjusted EBITDA grew to $28 million, which is a notable year-over-year switch from Q2 2019, when the company saw EBITDA of $4.4 million. The company's strong second-quarter results can be attributed to its presence in 23 states, where it operates 87 dispensaries, 22 cultivation sites, and 30 processing sites.

Curaleaf acquired a cannabis oil brand called Select for $948.8 million from Cura Partners in February. The acquisition of Select, organic revenue growth, and new store openings in 3 states contributed to a 112% increase in retail revenue from the year-prior to $66.3 million in Q2. The Select brand aided an increase in wholesale revenue to $33.3 million, a remarkable 422% increase from the year-ago period. Post Q2, its line of Select products is available in 12 states.

Curaleaf has made major efforts to establish footholds in key states, including Florida and New Jersey. The company is now offering its sublingual cannabis tablets exclusively in Florida, where the first-to-market oil alternative is available at 28 operating dispensaries. The company also acquired assets of Curaleaf NJ in July, for which Curaleaf provided management services before the buyout. Curaleaf NJ was a non-profit corporation with one of only six original marijuana licenses in the state. The acquisition is evidence that Curaleaf is hopeful for a state ballot vote on adult use of cannabis in the near future.

Another strategic acquisition was of Grassroots, which will also allow Curaleaf to spread its operations and cultivation potential. Before the deal, Grassroots was the largest private vertically-integrated operator in the U.S. In addition to gaining 135 dispensary licenses and 88 operational dispensary locations in the agreement, Curaleaf obtained 30 processing facilities and 22 cultivation sites. The $875 million deal increased cultivation capacity by a staggering 1.6 million square feet. If the U.S. legalizes marijuana at the federal level, Curaleaf's increased capacity will position it to meet national and international demand.

Management feels confident in its 2020 performance so far. Curaleaf had $122.8 million in cash and $283.3 million of outstanding debt as of June 30, and Curaleaf's organic initiatives and new acquisitions should lead to revenue growth in the third quarter and second half of 2020.

The medical cannabis industry is poised for serious expansion over the next five years. The legal cannabis market could grow by 230% worldwide, exploding from $9.5 billion in 2017 to $31.3 billion in 2022, according to research by ArcView Market Research and BDS Analytics. Medical cannabis in the U.S. could comprise more than 33% of that increase. Green Thumb and Curaleaf already have a strong presence in the medical marijuana space and are ready to capitalize on a market with incredible potential.

For more evidence, look at their year-to-date performance. 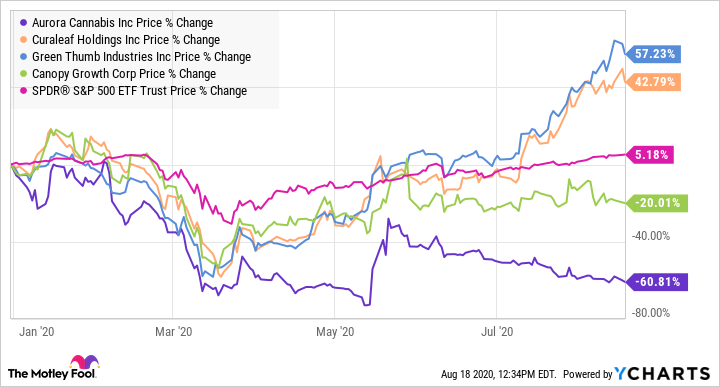 Aurora and Canopy have been investor favorites since Canada legalized recreational cannabis in 2018. The two had already made a name for themselves in the medical cannabis space and were well-positioned to capture the recreational market. But supply issues in Canada and rising black market sales, among other factors, have hindered growth plans and dragged on these two stocks. Canadian pot stocks are slowly recovering this year, but there are still questions around if and when a full recovery will happen.

Meanwhile, Green Thumb and Curaleaf have very clear strategies for the future. The COVID-19 pandemic hasn't seriously dented their expansion plans, and they have secure balance sheets and enough cash to expand their footprints in the states. If marijuana is legalized at the federal level, the growth prospects are huge for these two strong cannabis stocks.