Please ensure Javascript is enabled for purposes of website accessibility
Log In Help Join The Motley Fool
Free Article Join Over 1 Million Premium Members And Get More In-Depth Stock Guidance and Research
By Timothy Green - Aug 18, 2020 at 7:45AM

The new chip is tailor-made for hybrid cloud and artificial intelligence.

IBM's POWER10 processor won't be available in systems until the second half of 2021, but when it arrives it will provide substantial improvements over the previous POWER9 processor. IBM has tapped Samsung to manufacture the chips using a 7nm process. POWER9 processors, launched in late 2017, used a 14nm manufacturing process. 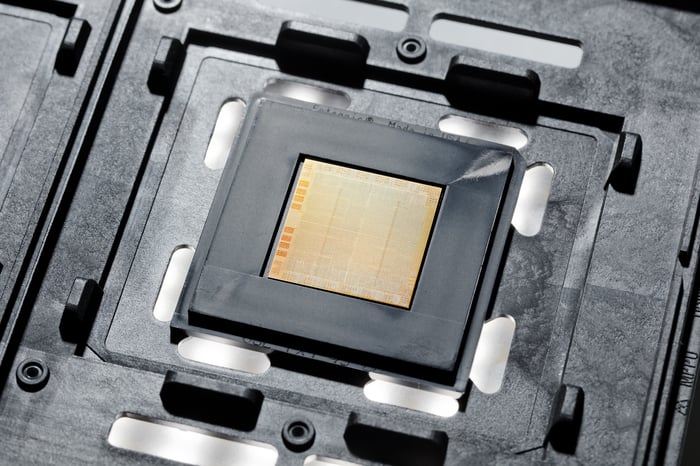 The move to a 7nm process will boost the efficiency of IBM's POWER10 chips. The company expects POWER10 to provide as much as a threefold improvement in energy efficiency per socket, allowing systems built with the chip to support three times as many users, workloads, and containers for hybrid cloud workloads.

IBM has bet big on hybrid cloud computing, acquiring Red Hat last year in a $34 billion deal. The POWER10 chip is optimized for Red Hat's OpenShift platform, playing into IBM's strategy of selling its existing customers on Red Hat's products. IBM has said that for every 5% of its base of large clients with little to no Red Hat spend, there's a $1 billion annual revenue opportunity in getting those customers to buy into the Red Hat ecosystem.

"With our stated goal of making Red Hat OpenShift the default choice for hybrid cloud, IBM POWER10 brings hardware-based capacity and security enhancements for containers to the IT infrastructure level," said Stephen Leonard, GM of IBM Cognitive Systems, in the press release announcing the POWER10 chip.

Artificial intelligence is another type of workload IBM is targeting with its POWER10 chip. The chip includes specialized hardware to accelerate AI inference, with IBM promising big improvements in AI performance compared to the POWER9 chip. POWER10 will delivery anywhere from a ten- to twentyfold jump in AI inference performance, depending on the type of calculation.

Security is also a selling point of the POWER10 chip. The POWER10 has four times as much hardware dedicated to encryption compared to the POWER9, providing significantly faster encryption performance.

While servers built using x86 processors from Intel or increasingly AMD dominate the market, IBM still has a major presence. IBM was the no. 5 server manufacturer in the first quarter of 2020, generating nearly $900 million of revenue and claiming around 5% of the market, according to IDC. Those numbers don't include sales from a joint venture with Chinese company Inspur to manufacture and sell POWER systems. That joint venture generated over $1.3 billion of sales in the first quarter, claiming 7.1% of the market.

The pandemic is probably hurting sales of IBM's hardware as IT budgets are cut. That pain will last a while, but things may be close to normal by the second half of 2021 when POWER10 systems become available. While IBM will probably fail to grow its revenue this year due to the pandemic, 2021 could be a different story.