The company is hoping to carve out a presence in the hyperscale data center market with its AI-optimized processor.

International Business Machines (IBM 0.44%) is also a player in the server chip market. IBM announced on Tuesday the first systems built around its brand-new POWER9 processor, which is designed to provide Intel-beating performance for artificial intelligence (AI) workloads. IBM's base of Power Systems customers will provide a market for these systems, but the real opportunity may be selling POWER9 chips to third parties. Alphabet's (GOOG -0.08%) Google is already on board, and two supercomputers being built for the U.S. Department of Energy are powered by IBM's new chips, along with GPUs from NVIDIA. 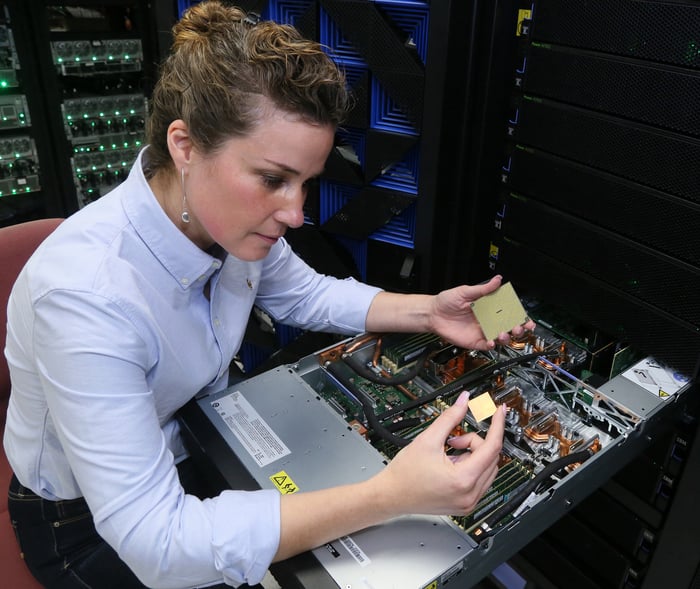 IBM began designing the POWER9 processor four years ago, with the aim of building a new architecture able to handle the massive amounts of data involved in AI and deep learning workloads. POWER8, the previous iteration, became available in mid-2014.

POWER8 brought with it a change in IBM's strategy. IBM and partners, including Google and NVIDIA, founded the OpenPOWER foundation in 2013, with the goal of building an ecosystem around the POWER architecture. IBM began allowing third parties to build systems around its POWER8 chips, as well as to design custom versions. The foundation now has more than 300 members.

Prior to this shift in strategy, IBM had no chance of winning any meaningful share of the hyperscale data center market. Cloud computing and internet companies like Google and Facebook design their own systems, which left them with Intel processors as the only real option. Back in 2015, an IBM executive said the goal was to win 10% to 20% of the hyperscale data center market, up from essentially zero at the time. The OpenPOWER model makes significant market share gains possible, although certainly not easy.

One barrier is the x86 architecture. Only Intel and AMD can make x86 chips, which are the standard in the data center thanks to Intel's dominance. Supporting a separate architecture, like POWER or ARM, is not trivial. The good news for IBM is that Google is aiming to make its data centers support more than just Intel chips. The search giant announced last year that it was developing a server architecture based on the POWER9 processor, and that the POWER architecture was completely supported across its toolchain.

What it means for IBM

Intel makes a lot of money selling its Xeon server processors. During the third quarter, Intel's data center group produced $4.9 billion of revenue and $2.3 billion of operating income. IBM won't have to steal away much market share for the impact to be felt on its bottom line.

That market share will come from selling chips to companies like Google, as well as selling Power Systems to customers. The POWER9-based AC922 is designed for artificial intelligence, with a big focus on data throughput. Using OpenCAPI and NVIDIA's NVLink technology, IBM claims that the system can transfer data at as much as 9.5 times the rate of an Intel-based system.

The success of POWER9 would mean not only more hardware sales for IBM, but also more software sales. IBM's longtime strategy has been to provide integrated solutions, involving hardware, software, and services. According to IBM, it's "the only vendor that can provide enterprises with an infrastructure that incorporates cutting-edge hardware and software with the latest open-source innovations."

The POWER9 story will play out over the course of years, and winning meaningful market share from Intel will be a slog. But with more than 300 partners working to further the POWER ecosystem, POWER9 is IBM's best chance yet at gaining ground in the data center market.