Big Blue's OpenPOWER initiative is still in its infancy, but the company has big goals and nearly 150 member companies on board.

The evolution of the server market over the past few years has not been kind to International Business Machines (IBM -0.81%). While the company's mainframe systems remain entrenched, its Power servers have been losing share to x86-based systems for quite some time. Cloud companies have been building massive, hyperscale data centers, often designing custom systems around chips from Intel. This is where much of the growth in the server industry is occurring, and IBM has completely missed the boat.

IBM recognized this problem a few years ago, and in 2013, the company founded the OpenPOWER foundation along with a handful of other member companies. The goal of the OpenPOWER foundation is to build an ecosystem around IBM's POWER architecture, with technology being contributed from all of the foundation's members. IBM now licenses its chip IP to chip designers and third-party POWER systems, as well as IBM's own POWER systems, so they can take advantage of the OpenPOWER ecosystem of hardware and software. 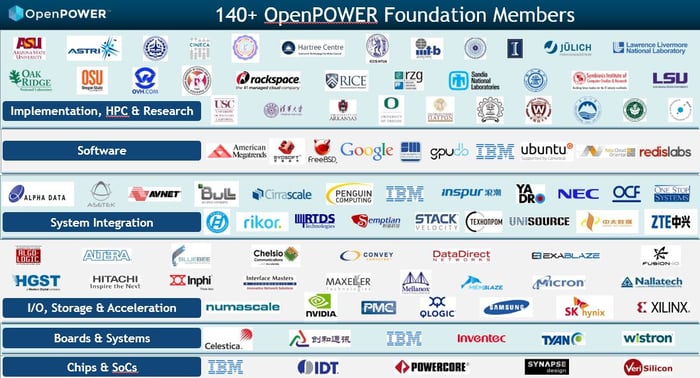 The OpenPOWER foundation has surged in membership over the past two years. The foundation now has nearly 150 members, including big names like Google, Samsung, NVIDIA, and Micron. There have been some major wins, including a supercomputer contract with the Department of Energy, which couples IBM's POWER processors with NVIDIA's GPU accelerators. But the effort is still in the very early stages when it comes to the hyperscale data center and high-performance computing markets. The first third-party hardware products were unveiled a few months ago, but gaining market share will likely be a slow process.

Earlier this month, IBM held a webcast to discuss the OpenPOWER initiative and take questions from analysts. Here are three important things that Tom Rosamilia, SVP of IBM Systems, had to say about OpenPOWER.

Collaboration is the key
On its own, it's unlikely IBM could successfully take on Intel in the data center and win a meaningful amount of market share. As Rosamilia explains, the strength of the OpenPOWER initiative is derived from the contributions of members:

So, as we look at how we do on our OpenPOWER Foundation strategy, it's to create a vibrant ecosystem, it's not just about us. We are not doing this alone, accelerated innovation through collaboration with partners. It's about what we can get at the systems level in this case by working with partners around how they can attach and plug into the OpenPOWER architecture and then amplifying the capabilities driving industry performance leadership.

NVIDIA, for example, contributed its NVLink technology to the OpenPOWER foundation. NVLink allows GPUs to be directly connected to each other, as well as with the CPU, increasing the memory bandwidth available compared to a typical PCE-Express interface. Along with IBM's Coherent Accelerator Processor Interface, which basically allows any accelerator, GPU or otherwise, to be connected directly with the CPU, these technologies greatly reduce the overhead involved in transferring data back and forth between the CPU and GPU, and between GPUs in a multi-GPU system. It doesn't matter how fast a processor is if it spends most of its time waiting for data to be moved around.

OpenPOWER is not simply an effort to get POWER chips into the data center. Instead, it's an effort to facilitate the building of systems that, through the contributions of all of the OpenPOWER members, provide a viable alternative to Intel-based solutions, particularly when it comes to analytics and big data applications.

Shooting for major market share gains
IBM has essentially no presence in the hyperscale data center market, and little presence in the high-performance computing market. OpenPOWER isn't an attempt to nibble around the edges, picking up the scraps, but instead to win a considerable amount of market share:

So, I will [not] predict exactly where it will get to, but we are starting in that space around zero. And clearly, for me, victory would be somewhere in the 10% to 20% range or it's not worth doing. So, that's to give you a range.

IBM's goal is to reach a market share of at least 10%-20% in both the hyperscale data center and high performance computing markets, both lofty goals, for sure. Among OpenPOWER members are Google and Rackspace, both providers of cloud computing services and big buyers of Intel chips. A move by either one to replace a significant number of Intel chips with POWER chips could turn the tables, legitimizing OpenPOWER as a real alternative to Intel. Some progress has been made: Google showed off a motherboard it built around a POWER processor last year, and Rackspace has already committed to building an OpenPOWER based platform.

There are plenty of use cases where OpenPOWER is not the ideal choice, but with the amount of data analytics happening in hyperscale data centers, there's a major incentive for cloud computing companies to have a viable alternative to Intel.

All upside
One concern regarding IBM's opening of the POWER architecture, allowing third-party POWER chips and POWER systems, is that IBM's own POWER systems business could be cannibalized. But as Rosamilia points out, OpenPOWER is basically all upside for IBM:

For example, to the extent that they sell-through hyperscale data centers, it's all upside for me. To the extent they are helping us to go into -- go in deeper into the Linux marketplace, it's all upside for me. We obviously did very well and have done very well, and plan to continue to do very well in the Unix marketplace, but as you all have seen, that marketplace has been in decline, so we have an ever growing share of an ever declining market.

In the world of proprietary UNIX systems, IBM does very well. But Linux is the environment of choice for hyperscale data centers, according to data from IDC, and that market will continue to grow regardless of whether IBM participates in that growth. The progress that OpenPOWER members achieve in winning share in the hyperscale data center market is progress that IBM wouldn't have made otherwise, and it doesn't change the downward trajectory of UNIX-based systems.

IBM's legacy Power Systems business doesn't work well in a world where cloud computing companies are designing and building custom systems. OpenPOWER is an attempt to tap into markets where IBM would have no access otherwise, and that's all upside for IBM.