Shares of Advanced Micro Devices (AMD 1.68%) have been clobbered since the company dropped its first-quarter earnings report on May 1. Wall Street took issue with AMD's muted gross margin forecast, and analysts seem to be concerned with the company's ability to compete against Intel (INTC 0.84%) in the server and the central processing unit (CPU) market.

But AMD isn't going to lay low after its latest setback. The semiconductor specialist has clearly spelled out its intention of going after Intel's stronghold at its 2017 analyst day, targeting premium PCs and X86 server processors with new products.

AMD wants to take a bite out of server processors

Back in March, AMD had announced that it is working on a new two-socket server processor architecture known as Naples, touting its superior specs as compared to Intel's flagship server offering. AMD has now provided more details regarding this new chip, which has been rebranded as Epyc.

Currently, Intel has a near-monopoly in x86 server chips, as it commands over 90% of this market. So, AMD had to bring a cutting-edge product to make its presence felt in this space, and it looks like Epyc is just what it needed. 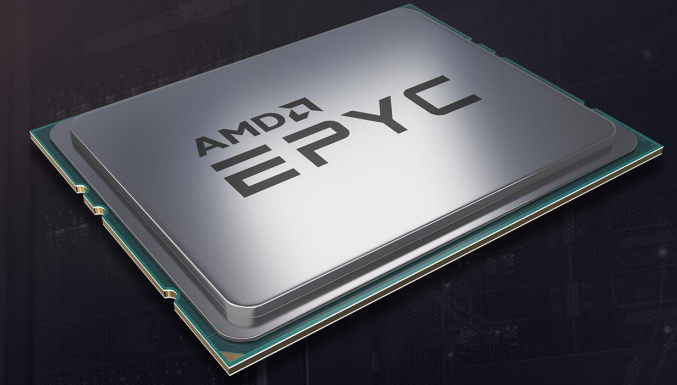 AMD claims that its Epyc server chip will break the constraints of Intel's Moore's Law by improving product yields and reducing manufacturing costs, while its scalable nature will help deliver a substantial boost in performance as compared to its rival. In fact, AMD has packed the Epyc chip with 45% more cores than Intel's competing chip, 60% more input/output capacity, and 122% more bandwidth memory. 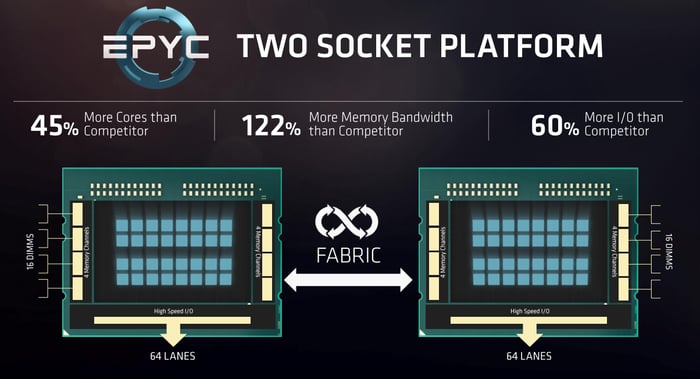 AMD's internal tests establish Epyc's dominance over a typical Intel server chip, thanks to its superior configuration as it packs more power in a smaller form factor. In fact, AMD claims that the single-socket performance of Epyc is 50% more powerful than Intel's two-socket chips, while also providing the benefit of lower power consumption, which should lead to lower operating expenses.

More specifically, AMD believes that Epyc's performance advantage could help it reduce the total cost of ownership of data center servers by up to 30%. This could help the company disrupt the market for two-socket server chips, which accounts for 80% of the overall x86 server market.

Investors should probably take AMD's performance comparisons against Intel's server chips with a grain of salt, as these tests aren't independent. But if AMD indeed manages to deliver real-world performance gains against Intel, and prices Epyc right, it can make a dent in the global data-center server market that's expected to grow at almost 5% a year until 2021.

AMD has started to aggressively target a $39 billion opportunity in client computing and discrete graphics processing units by going against Intel in the high-end PC CPU market with its latest offerings.

AMD's computing revenue growth is already outpacing the overall market. It won't be a big surprise if the trend continues, as AMD is trying to reenter the premium end of the market, which should lead to higher average selling prices and better margins.

AMD has already increased its total addressable market by $9 billion thanks to the launch of the Ryzen 7 and Ryzen 5 series of central processing units (CPUs) in the first half of 2017, which are aimed at premium desktop customers. As it turns out, the current Ryzen lineup is already in strong demand by PC builders, with more Ryzen-based desktops on the way this quarter.

The good news for AMD investors is that the new CPU lineup is winning back market share. In fact, during the first quarter, the Ryzen CPUs led to a 2% increase in AMD's CPU market share. The company finally made a dent in Intel's stronghold for the first time in a decade.

AMD will continue to launch more Ryzen CPUs aimed at the commercial market for workstations and laptops, along with consumer laptops, through the first half of the next year to boost its total addressable market by another $10 billion. It won't be surprising if it continues to take more market share away from Intel once its full range of Ryzen CPUs hit the market.

AMD stock had a tough time after the company's latest results, but investors shouldn't worry, as its new CPUs have started gaining traction, allowing it to break into Intel's market. The launch of the Epyc server chips will give AMD's top line another boost as it takes on Intel, setting the stage for stronger long-term growth.