The video game maker is hedging its bets with the acquisition of Playdots.

Dealmaking is heating up in the video game industry. Zynga scooped up two mobile game studios over the summer, while AT&T is looking for potential suitors for its Warner Bros. games unit.

Now, Take-Two Interactive (TTWO 2.22%) has joined the party by announcing a $192 million deal to acquire Playdots, the maker of Dots, Two Dots, and Dots & Co. That might sound underwhelming, but these games tap into the fast-growing hyper-casual mobile game market and have been downloaded more than 100 million times.

This is Take-Two's second major acquisition since 2017, when it acquired Social Point for $250 million, which has served as the company's primary mobile game arm. Here's what Playdots brings to the table. 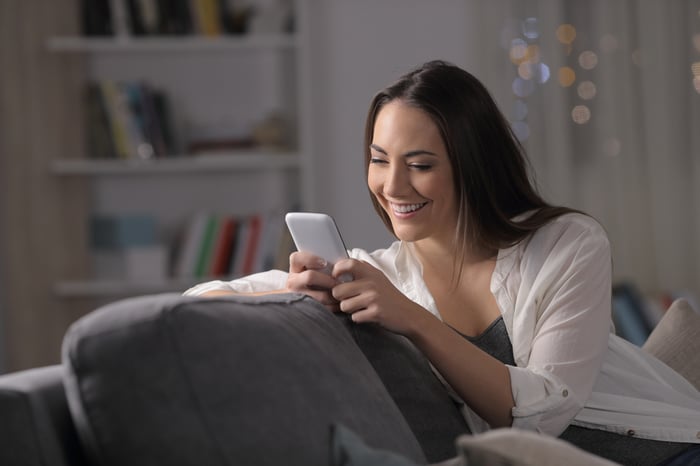 It's apparent that Take-Two found a small gem with this one. Playdots is led by Nir Efrat, who was previously head of franchises and studios at Activision Blizzard's King. At King, Efrat oversaw several franchises such as Farm Heroes Saga, Bubble Witch Saga, and Pet Rescue Saga. King is one of the top mobile game studios in the world. Known for the Candy Crush franchise, it generated over $2 billion in revenue in 2019. Efrat will certainly bring valuable experience to Take-Two's mobile game efforts.

Playdots is best known for Two Dots, which has been downloaded over 80 million times since launching six years ago. The puzzle game's minimalist design is representative of what makes hyper-casual games so popular and engaging.

The hyper-casual market is exploding, with these apps recently dominating the most downloaded games charts in the app stores. Total spending on mobile games is estimated to grow 13% this year to reach $77 billion, according to Newzoo, which means these hyper-casual games are generating a sizable amount of annual revenue as a whole.

Clearly, owning best-of-breed hyper-casual game studios could pay off in a big way for Take-Two. The number of new installs of hyper-casual games grew 656% in the U.S. between 2019 and 2020. While some of that growth was likely due to the sheltering-in-place from COVID-19, it's telling that hyper-casual games are also leading all mobile game genres in number of installs and revenue growth, according to Appsflyer.

The business side of hyper-casual games

Other than the growth prospects of this market, hyper-casual games are attractive to top video game companies, because they reach a wide demographic, including those who don't consider themselves gamers. Additionally, these minimalistic, casual games typically require less expense to create as opposed to the more graphically demanding titles on the market. If a certain title becomes a hit, the returns can be high to a company, such as Take-Two, that might be looking to diversify its game roster away from the hardcore games on console and PC.

Outside of Take-Two, other parties are investing big money in the hyper-casual market, which validates the opportunity here. Zynga acquired Gram Games in 2018 for $299 million and just recently acquired 80% of Rollic for $168 million. A few years ago, Goldman Sachs' private equity fund invested a reported $200 million in French mobile game maker Voodoo.

The Playdots acquisition is expected to close in the third quarter of calendar 2020. The deal comes on top of recent momentum from Take-Two's Social Point, which grew recurrent spending 54% year over year, leading to a record fiscal first quarter.

Both Social Point and Playdots have a development pipeline that Take-Two expects to drive "positive, long-term contributions" to the business, said Michael Worosz, Take-Two's executive vice president and head of strategy and independent publishing, in a press release.

After strong growth from its core games on console and PC, such as Grand Theft Auto and NBA 2K, Take-Two held a grand sum of nearly $2.28 billion in cash on its balance sheet at the end of the recent quarter. Even after the Playdots transaction closes, Take-Two will still have plenty of cash to invest in other opportunities over the next few years.