This was supposed to be a transition year for Take-Two Interactive (NASDAQ:TTWO). After a record year in fiscal 2020, one in which net bookings were just shy of $3 billion, management originally guided for fiscal 2021 net bookings to dip to a range of $2.55 billion to $2.65 billion due to a lighter release slate. But the coronavirus and the resulting shelter-in-place orders have changed all that.

Heightened levels of player engagement continued through June, sending earnings per share up 88% year over year. Management is now calling for net bookings to fall between $2.80 billion to $2.90 billion for fiscal 2021.

The stock is up 43% year to date and currently flirting with a new all-time high. Here's what drove the stellar results in the fiscal first quarter and why Take-Two should have tremendous momentum at the start of the new console generation coming later this year. 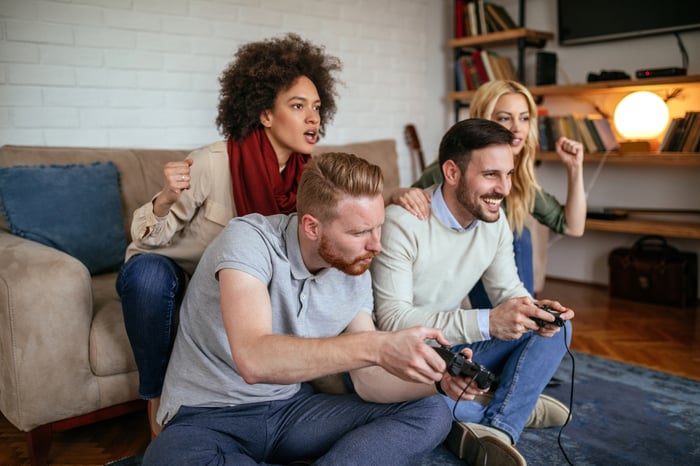 Going into the quarter, the consensus analyst estimate called for net bookings to come in at $843 million. But Take-Two reported $996 million in net bookings, an increase of 136% over the year-ago quarter.

NBA 2K also continues to grow its audience with 14 million units sold since coming out last year. Zelnick noted, "We expect that lifetime units, recurrent consumer spending, and net bookings for NBA 2K20 will be the highest ever for a 2K sports title." But the NBA 2K21 coming next month could be even bigger.

Take-Two announced in July that it was raising the price for the PlayStation 5 and Xbox Series X version of NBA 2K21 from $60 to $70, while the current-generation console price will remain at $60. The price increase not only reflects the higher cost of making games for the new systems but also the higher-quality experience 2K Games is bringing to players.

The change also reflects the obvious: that Take-Two expects players will be willing to pay a higher price. It's a bold move in a recession, but it also signals just how much demand Take-Two is seeing for NBA 2K right now.

The revised outlook reflects continued momentum going into the fiscal second quarter, but it actually does not include any elevated levels of engagement lasting through the fiscal third and fourth quarters, according to management. All of the big video game companies typically remain conservative with their guidance, and it's certainly appropriate to be conservative given the fluid situation around COVID-19. But Zelnick offered his thoughts about what the recent demand trends mean for the long term.

"I think you're going to see a long-lasting increase in demand," Zelnick said. "Again, that's not reflected in our numbers, because we don't build our guidance based on my opinion about things, luckily. But I do believe that's the case. And I think you're seeing a systemic shift in favor of interactive entertainment."

While it's impossible to know with certainty what will happen, the longer these high engagement levels stick around, the better it is for investors. Take-Two is very confident that there will be ongoing engagement with its top franchise, Grand Theft Auto V. Not only is the company committed to delivering even more content for the current installment of the franchise on the new consoles, but Rockstar Games is also planning to offer a stand-alone version of Grand Theft Auto Online in the second half of calendar 2021.

As tragic as the pandemic has been, the million of new gamers who have been converted in recent months could drive higher demand for the Sony PlayStation 5 and Microsoft Xbox Series X, laying the foundation for continued growth for the top video game companies, including Take-Two.