Please ensure Javascript is enabled for purposes of website accessibility
Log In Help Join The Motley Fool
Free Article Join Over 1 Million Premium Members And Get More In-Depth Stock Guidance and Research
By Alex Carchidi – Aug 26, 2020 at 7:30AM

When you're investing for the long term, it can sometimes pay to buy beaten-down stocks that have fallen into disfavor. Companies being hit by a slew of bad news aren't necessarily doomed to fail, even if the market might seem to think so at the moment. Buying stock in a company when it's at a steep bargain makes its eventual recovery all the sweeter for your investment portfolio. That's basically the defining characteristic of contrarian investing.

To make the strategy work, it's important to recognize that picking contrarian stocks can take a few years to pay off. But picking the right one can make that patience pay off.

With the current economy in recession, there are plenty of potential companies out there to take a contrarian position in. But I want to focus on just three for this article. All three of these companies have had a terrible 2020 and there's no guarantee that they will ever regain their former greatness. But there is reason to believe that they still might at least beat the market over the next decade.

Let's take a closer look at these three contrarian stocks and why you should buy now before their prices to fully recover. 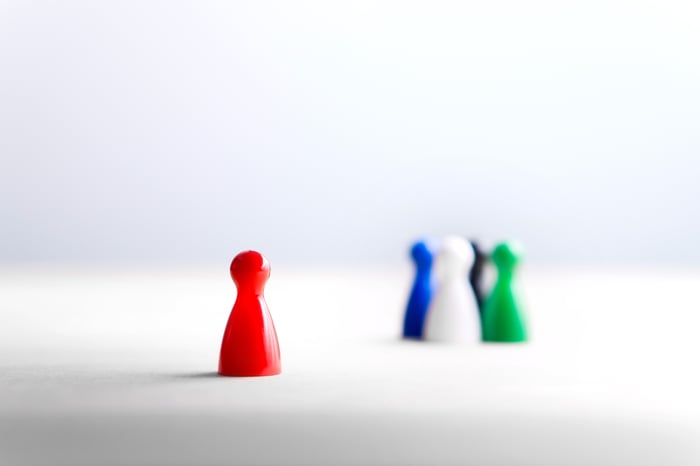 Boeing (BA 5.92%) stock had a volatile 2019 as serious safety issues related to the 737 MAX commercial jet forced the entire fleet to be grounded for much of the year. Considering the headwinds the company was facing related to this ongoing issue, it was fortunate that the stock price finished out 2019 basically flat for the year.

Then came the coronavirus pandemic in 2020, which sent the economy into recession and devastated the travel industry (especially the airlines). Not only were flights grounded or reduced, but orders for new Boeing commercial planes of any type dropped significantly to go along with the continued grounding of the 737 MAX, with revenue from commercial airplane manufacturing collapsing to $1.6 billion in the second quarter compared to $4.7 billion in the same period last year. It's not surprising then that the stock price collapsed by around 46% so far in 2020. In response, Boeing's newly appointed CEO announced several rounds of job cuts with the stated goal of trimming more than 10% of its global workforce of 160,000 employees.

Make no mistake, Boeing is in bad shape, and its operational losses will likely continue for some time. Despite this, the company stock is up about 98% from its 52-week low in mid-March. Also on the bright side, the company reported in July that it was still experiencing a normal level of demand from its largest market segment, defense and space, which posted roughly the same $6.6 billion in sales in the second quarter of this year as it did last year. Basically, Boeing's problems in its commercial airplanes business haven't spilled over to its other segments. More importantly, the company will be able to lean on the defense segment as it works through the recent fallout by slowing down production and working on getting the 737 MAX back into the air.

Once Boeing has had enough time to rebuild its customers' trust, higher revenue should soon follow, and it's unlikely that the company will lose its status as a prime defense stock in the meantime. So, rather than fleeing from Boeing's substantial crop of issues, contrarian investors will recognize that the company's 737 MAX problems and the pandemic are probably temporary, even if the market has reacted strongly.

With the pandemic forcing people to avoid congregating in large groups in enclosed spaces, AMC Entertainment Holdings (AMC 13.81%) has basically been forced to halt operations since March. That crushing blow to the world's largest theater chain caused the stock price to fall by about 24% year to date. The company's year-over-year quarterly revenue plunged by 98.7% in its most recent quarter and AMC's $498 million in cash reserves is nowhere near enough to cover its $10.94 billion in short- and long-term debt.

How could this company possibly recover? In short, by pursuing a new business model and regaining some of the revenue from its old business model as public life slowly resumes.

AMC's recovery will likely take years, but there are already a few inklings of a revival. The company's stock is up 174% from 52-week lows set in mid-April, and management said in the most recent earnings report that the theater chain has been largely successful in restructuring its debts, renegotiating its leases, and reducing its cash outlays to a more sustainable level, which should allay some fears of looming bankruptcy. Importantly, in August AMC signed an agreement with Universal Studios enabling AMC to earn revenue when consumers watch films from their home. To accomplish this, AMC agreed to relax the duration of its theater exclusivity rights for new films from 70 days to 17 days. After that, AMC will also share in these new revenue streams that will come to the movie ecosystem from premium video on demand. While it's unclear how much this agreement will be worth per quarter, AMC is the first theater chain to pursue such an arrangement, and it's already looking into signing additional deals with other studios. This deal demonstrates effective leadership, and it also shows that the company is willing to make major changes to survive and transform itself.

As the pandemic ebbs, it's probable that in-person revenue at AMC theaters will also start to pick up momentum once again. The chain was able to reopen many of its theaters in the U.S. to show first-run movies to a reduced, socially distanced audience beginning on Aug. 20. Finally, its theaters outside the U.S. appear to be reopening to higher-than-expected demand, which could result in a sharp increase in revenue next quarter. 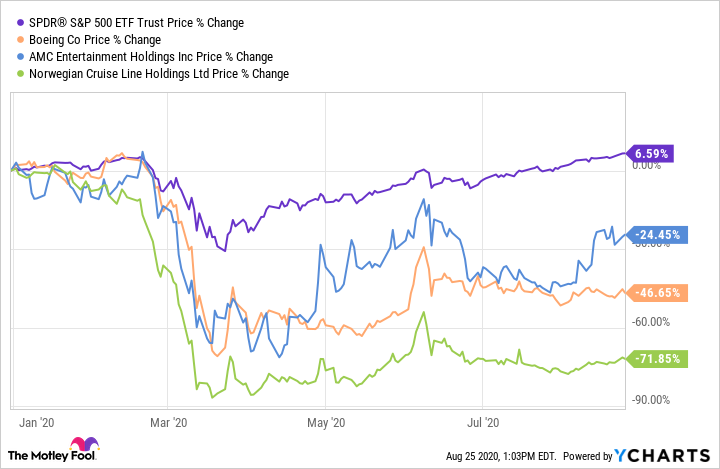 Norwegian Cruise Line Holdings (NCLH 16.84%) was hit hard by the coronavirus pandemic and its stock is down a stunning 71.8% from the start of the year. What's worse is that its year-over-year quarterly revenue contracted by 99% and its fleet of cruise ships has basically been shut down since late March by government order. As with AMC, this stock's decline is a no-brainer: The pandemic has effectively killed its business for the moment. After warning about the specter of bankruptcy, Norwegian's leadership has taken action to shore up its cash holdings by selling additional stock in the company, borrowing as much as $400 million from private investment firms, and taking on new debt. With $2.26 billion in cash, a monthly burn rate of $160 million during suspended operations, and trailing 12-month levered free cash outflows of $2.13 billion, the company has thus secured itself a lifeline for at least another year.

The company's view of the long term is far from bearish, however. In fact, as recently as May, Norwegian claimed that it was still planning to add nine additional cruise ships to its fleet between now and 2027. This means that it sees demand for cruises rebounding before the end of the decade to exceed that of its pre-pandemic level. While it's unclear whether Norwegian is correct, loyal investors have already pared back some of the year's losses, with the stock up 137% from 52-week lows set in mid-March.

Sentiment about the company is improving as the lockdowns wind down, and its highly hedged fuel costs may allow it to sail more cheaply than expected given the average price per barrel for oil. Surprisingly, the company also reported that its cumulative bookings for 2021 are within its historical norms so far, so its recovery may be more rapid than expected, especially if pricing is calibrated aggressively to accommodate shaky consumer sentiment. If Norwegian's 2021 proceeds as planned, its currently depressed price is a major bargain. But, investors should realize that taking the contrarian approach to this stock is highly risky because there's no telling when the company will get clearance to sail, even as the pandemic eases in some of its most important ports.

There Won't Be Another COVID-19 Lockdown. Here Are 3 Reasons Why