Chevron's 6% dividend yield is as reliable as you can get.

When Chevron (CVX 2.62%) declared its 33rd straight year of quarterly dividend raises in January, it didn't know that a pandemic would collapse the world into a recession. Yet instead of cutting its dividend like other oil majors, Chevron has reaffirmed that its "financial priorities remain unchanged."

Chevron yields three times the market average. And with its shares down close to 30% this year, there could be even more room for upside. Let's dive in to see if the company is a buy, or its dividend and downtrodden share price are too good to be true. 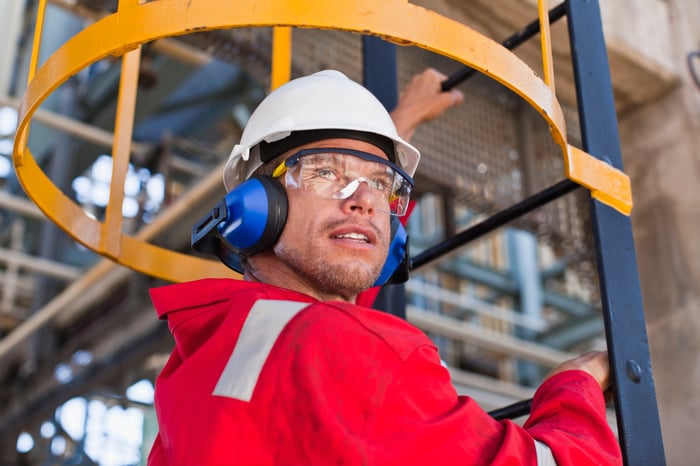 Chevron's suspension of share buybacks, $3 billion second-quarter adjusted loss, and over 50% decrease in sales and operating revenue are reasons to be concerned about the company. However, Chevron introduced a stress test that concludes it will maintain its industry-leading balance sheet and be able to afford its dividend at $30 Brent crude oil from 2020 to 2021. The stress test factors in Chevron's recent assets sales, increased liquidity, and 40% reduction in 2020 capital expenditures.

Chevron introduced the stress test during its first-quarter call in early May. Since then, Chevron has reaffirmed the resilience of its dividend through $30 Brent oil and reports that its business is showing signs of improvement in the third quarter. "Things are definitely better than they were in the second quarter, in particular, in that April-May time frame," said Chevron CFO, Pierre Breber.

April 2020 and May 2020 were the first months that averaged below a $30 Brent price since December of 2003, providing a context of just how severe COVID-19 has impacted oil prices.

With Brent prices seemingly stabilized above $40 per barrel, there's reason to be optimistic that Chevron won't have to challenge its stress test.

Chevron's success and continued focus in the prolific Permian Basin gives the company upside potential. For now, Chevron has been pressured to cut Permian spending in the second half of the year by 75% compared to the first quarter, but thanks to improved efficiencies, Chevron believes it can still be cash-flow positive in the Permian this year.

Despite production curtailments and reduced spending, Permian production should be down just 6% or 7% in 2021. Jay Johnson, executive vice president of Upstream, said that "the near-term production profile for the Permian has changed, but our long-term view of the asset's attractiveness has not."

Supporting that commitment is Chevron's planned acquisition of Noble Energy (NBL), which will substantially increase Chevron's reserves for a low cost. The timely acquisition gives Chevron complementary acreage for added upside in the Permian.

A 6% yield for the taking

Chevron has repeatedly said that it understands the importance of its growing dividend to shareholders. Its stress test and positive free cash flow in the Permian, despite the challenging market, are Chevron's way of communicating to investors that its efforts during the pandemic are working. In this way, the health and reliability of Chevron's dividend are quite predictable. Barring a second wave of the pandemic that collapses oil prices again -- or a sustained collapse in prices for reasons unknown -- Chevron's dividend looks as good as gold.

It's refreshing to see transparency from one of the world's largest oil companies. Chevron's pragmatic efforts to preserve its balance sheet and mitigate risk, coupled with its upside potential, reinforce the company's reputation as one of the best oil stocks on the market.

There's no denying that exposure to oil and gas has its fair share of long-term risks. And it's true that Chevron hasn't shown the level of interest in the energy transition as other oil majors who want to turn into renewable energy stocks. However, oil and gas will likely remain an integral part of the energy mix for decades to come. Given Chevron's handling of the pandemic and track record for dividend growth, it looks to be one of the best ways to invest in oil at this time.

Why Shares of Chevron Are Falling Today
409%