Don’t miss out on the transformation of a lifetime.

The energy transition is well under way as renewable electricity capacity continues to grow around the world. Unbeknownst to many is the role that oil and gas companies are playing in this transition, a handful of which have recently upped the ante considerably.

Let's look at three oil majors that are aggressively targeting renewable investments to determine if they can transform themselves into renewable energy stocks over the coming decades. 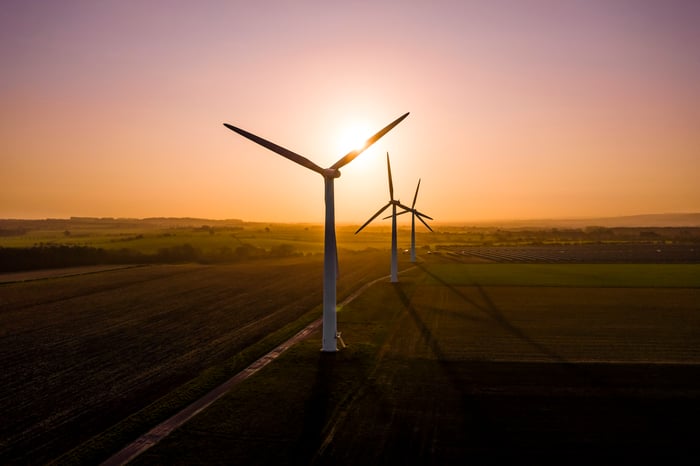 From 2010 to 2019, over 1,400 GW of renewable energy capacity was added throughout the world. The International Energy Agency (IEA) expects renewable growth to accelerate, predicting 1,200 GW of global growth between 2019 and 2024. Offshore wind energy is expected to triple in capacity and provide 4% of that growth, but today it provides just 0.3% of global power generation. More on that later.

The main growth drivers of this global renewable energy expansion are the long-term sustainable energy goals of companies and governments and decreased costs throughout the renewable energy mix. Europe's renewable appetite is second only to China's, as the continent has installed double the renewable capacity of the United States over the past 10 years. Europe's comparatively higher focus on renewables may be one reason why the three oil majors on this list are European companies, not American.

First on this list is Royal Dutch Shell (RDS.A) (RDS.B), the largest European oil major by market capitalization. According to Bloomberg, Shell is leading its European peers: "European majors closed seven times as many deals with renewable-electricity and storage companies as their U.S. counterparts since 2010."

In April, Shell announced aggressive emission reduction goals, including net-zero manufacturing emissions by 2050, reducing the "Net Carbon Footprint of the energy products Shell sells to its customers by around 65% by 2050 and by around 30% by 2035," and working with businesses that are also net-zero emissions by 2050. Shell currently has 1.6 GW of solar generation capacity, 0.23 GW of wind capacity, and 5 GW of wind power projects in the works.

BP (BP 8.35%) doesn't just want to increase its renewable portfolio, it wants to downright dominate renewable energy. Solar, wind, bioenergy, hydrogen, carbon offsets, and more are combining to pole-vault BP's renewable capacity from 2.5 GW at the end of 2019 to 50 GW by 2030. To do that, BP plans to cut its oil production by 40%, and begin to spend $5 billion per year in low-carbon investments by 2030, ten times the amount it spent in 2019. BP currently has a 12 GW pipeline of projects through its 50% stake in Lightsource BP, a solar developer.

Announced on August 4, the details of BP's aggressive plan were a follow-up to the company's February 12 announcement to be carbon-neutral by 2050.

Equinor ASA (EQNR 1.35%) is Norway's largest oil and gas company. With the government and Norway's national pension fund owning 70% of the company, Equinor's interests and strategical shifts are naturally going to be somewhat aligned with Norway's agenda, renewable energy focus, and long-term support of the Paris Agreement.

Norway itself is largely independent of fossil fuels, getting about 97% of its renewable electricity production from hydropower. Because of that self-reliance, Norwegian oil and gas companies like Equinor are profiting off of the rich reserves in Norway's portion of the North Sea, rather than providing energy for their own country. But after decades of drilling the best of those rich reserves, Equinor now believes the North Sea may only be profitable until 2030. The company's solution is to utilize its long and shallow coastline along the Norwegian continental shelf to become the leader in offshore wind energy.

The company currently has just 0.5 GW of renewable capacity, but it expects to grow that number tenfold by 2026 and then up to 12 GW to 16 GW by 2035. Equinor's existing and planned offshore wind projects lead the industry, and should help the company reach its goal to have carbon-neutral global operations by 2030.

Anders Opedal will take the helm as Equinor's new CEO on November 2, providing the final piece to make Equinor's renewable ambitions a reality.

Aside from their European affiliations, there are many similarities between Shell, BP, and Equinor.

For starters, all three companies have been severely impacted by COVID-19, and as such have cut spending, raised debt, and cut their dividends. They've also all announced major commitments to carbon-neutrality this year.

Shell, BP, and Equinor also have some of the weakest balance sheets of the oil majors, and sport higher debt to capital ratios and debt to equity ratios compared to their American counterparts. 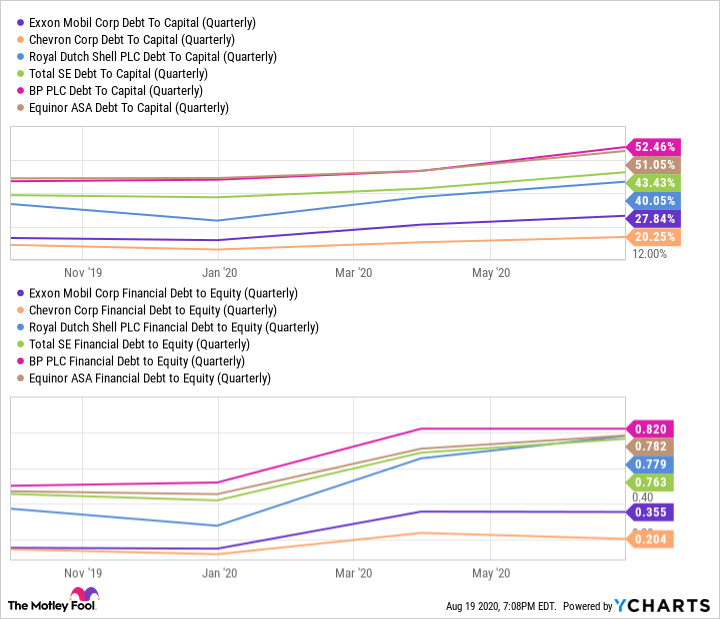 And although shares of Equinor are down the least of all the oil majors, BP and Shell are both down over 40% year-to-date (YTD), the worst of the cohort.

Exxon's long-term dedication to oil and gas and Chevron's current status as arguably the best oil stock make it unlikely either company will be a strong renewable force in the coming decades. However, the impacts of the COVID-19 pandemic seem to have accelerated the energy transition for Shell, BP, and Equinor. All three businesses are struggling, and are likely exhausted by the volatility and low prices of oil and gas right now.

Shell remains a natural gas powerhouse, and it was just last year when the company had the best free cash flow of all the oil majors. Therefore, Shell probably won't undergo a full-on transformation. However, BP and Equinor seem determined to transform into renewable energy stocks. Crippled by a weak balance sheet, the only thing surprising about BP's dividend cut and renewable push is that they didn't happen sooner. As for Equinor, the company's expertise in offshore exploration and production, government interest, depleting offshore oil and gas assets, shallow coastline, and first-mover advantage into one of the highest growing subcategories of renewable energy make it ideally positioned to dominate offshore wind.

BP's dividend cut and aggressive goals are a step in the right direction, but Equinor currently has the best chance to turn itself into a renewable energy stock over the next 15 years.