The deal could be the largest-ever out-licensing agreement by a Chinese biotech.

AbbVie (ABBV 0.17%) has signed a collaboration agreement with Chinese clinical-stage biotechnology company I-Mab (IMAB -15.29%) for the development and commercialization of lemzoparlimab, a monoclonal antibody in early-stage clinical testing that could be used to treat various cancers. The antibody targets CD47, a protein that is overexpressed on the surface of many types of cancer cells and delivers a "don't eat me" signal to the body's immune system.

Under the terms of the agreement, AbbVie will pay I-Mab $200 million now and up to $1.74 billion in milestone payments in the future. AbbVie will get an exclusive license to commercialize lemzoparlimab globally excluding greater China, paying tiered royalties in low- to mid-teen percentages of sales. I-Mab will have the right to commercialize the drug in mainland China, Hong Kong, and Macau. 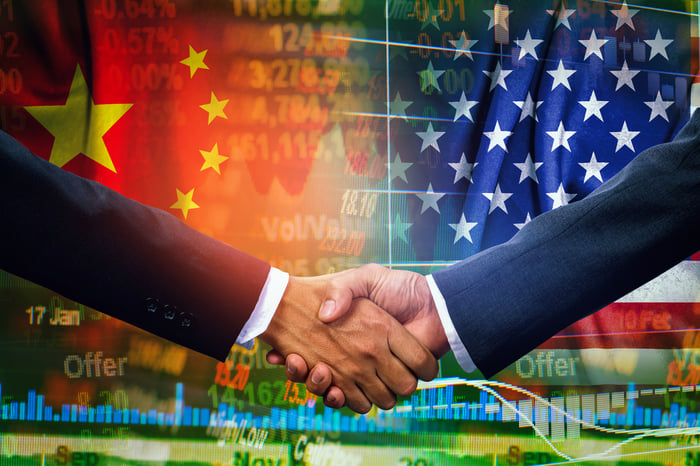 The collaboration potentially involves exploring the combination of lemzoparlimab with AbbVie's blood cancer drug Venclexta. On a conference call with analysts, I-Mab said that AbbVie will have the option of collaborating with the biotech on other CD47 antibody treatments, including two preclinical drug candidates in I-Mab's pipeline with potential deal value of another $1 billion. On the call, I-Mab said, "In terms of total deal value, we believe that this is the largest out-licensing and global partnership transaction ever executed by a Chinese biotech company."

Drugs targeting CD47 are a hot item in immuno-oncology now, with Gilead Sciences paying a stunning $4.9 billion to acquire small biotech Forty Seven earlier this year. I-Mab believes lemzoparlimab is superior to its competition because it minimizes binding to red blood cells, a problem with other CD47 antibodies. This may be the reason AbbVie passed up a deal with domestic biotech Trillium (TRIL), whose shares fell on the news.