With everything that's going on with the COVID-19 pandemic, many healthcare companies have grabbed plenty of spotlight during these challenging times. At the same time, a number of otherwise promising businesses have slipped under the radar.

That's especially true for small-cap biotech stocks that aren't actively involved in developing tests, vaccines or treatments for COVID-19. Vaccine developers, protective equipment producers, and healthcare service providers are all attracting plenty of attention during this pandemic, but there are just as many promising biotech stocks that aren't involved in these areas. Here are two such companies that you might have missed, but they deserve a spot on your watch list.

Trillium Therapeutics (NASDAQ:TRIL) is a small-cap biotech stock that has seen a dramatic surge in stock price so far in 2020. Trading in the penny stock range in 2019, Trillium's stock price has almost quadrupled since the start of the year. Considering this meteoric rise took place while COVID-19 was escalating around the world, it wouldn't be surprising if news about this company passed you by.

Trillium is one of the few companies developing CD47-based treatments, an area that's quickly become one of the hottest areas of cancer research. Simply put, CD47 is a protein found on the surface of cells that signals to immune cells (specific types of white blood cells such as T-cells) to leave these cells alone. However, it turns out that almost every type of cancer cell has an overabundance of CD47 proteins, which explains why the body's immune system has difficulty targeting these cells in the first place. By blocking these CD47 proteins, the immune system can target and kill cancer cells as it would any other unhealthy cell in the body.

Right now, Trillium has two CD47-based candidates in clinical testing. TTI-621 seeks to treat a number of blood cancers, including B- and T-cell lymphomas, while TTI-622 goes after myelomas, a type of cancer that develops in plasma cells. Both of these candidates are currently undergoing phase 1 trials, and while they remain extremely promising, they still have a long way to go before the company is ready to apply for regulatory approval.

What makes many experts excited about Trillium, however, is its potential as a possible buyout target. Gilead Sciences announced plans to buy Forty Seven for $4.9 billion in March to acquire its own CD47-based treatment, magrolimab. With relatively few CD47 drugmakers out there, there's plenty of speculation surrounding Trillium and whether it's going to become the next major acquisition target of a pharmaceutical giant. If so, Trillium shareholders have a lot to gain by holding the stock right now.

Besides this, Trillium is also expected to provide a number of clinical updates in 2020. This includes a mid-year update as well as an American Society of Clinical Oncology (ASCO) cancer conference presentation scheduled in late May. Although Trillium currently doesn't have much in terms of income -- which is understandable given that it's an early-stage biotech stock -- the company has enough cash to last itself a while. Currently, Trillium has $130 million in cash, and with total expenses in 2019 coming in at $38.8 million, the company has over three years of financial breathing room.

If Trillium wasn't already on your stock watch list, you should definitely keep an eye out for it in the coming months. Between further clinical updates and potential buyout offers, there's a lot to be excited about with this company. 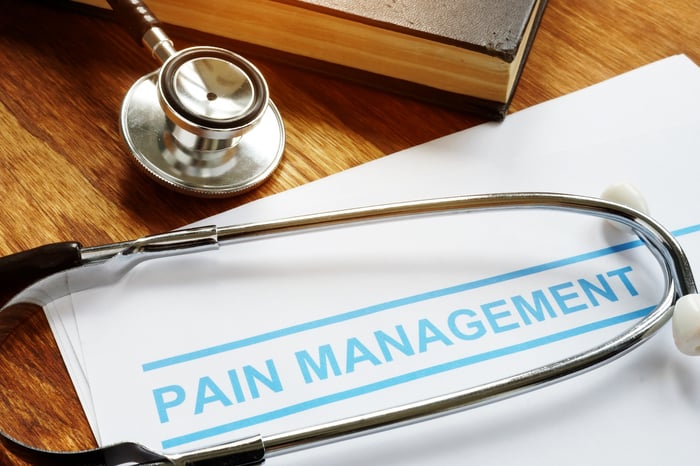 While the opioid crisis and its fallout remain a big issue for Americans, it's a topic that has fallen by the wayside in light of the COVID-19 pandemic. That's unfortunate since there's a number of small biotech stocks making major advances in the area of pain management but aren't getting the amount of attention they deserve.

BioDelivery Sciences (NASDAQ:BDSI) is one of those companies. With a market cap of around $400 million, shares of this biotech stock have tumbled around one-third since the beginning of 2020. In contrast, net sales of BioDelivery Sciences have reached a record high as revenues continue to grow.

The company focuses on developing treatments that help patients manage chronic pain. Traditional opioids tend to last a relatively short period of time, between four to six hours, depending on the specific medication. Patients often need to take multiple doses a day, which is seen as being a factor that increases their risk of addiction.

BioDelivery's flagship pain drug, Belbuca, is a specific type of opioid known as a buprenorphine that's been marketed as a potential alternative to traditional opioids. The idea is that longer-lasting opioids that require fewer doses carry a smaller risk of overdose and prevent patients from becoming addicted in the first place.

As far as medical science goes, using buprenorphine isn't a new concept at all. They've already been effective in treating patients with opioid addictions, helping them wean off of stronger opioids while minimizing withdrawal symptoms. Additionally, buprenorphine has proven to be safer than regular opioids in some medical circumstances, such as patients with compromised kidney or liver function who still need pain relief.

Belbuca specifically stands out from other buprenorphines in that it's the only drug of its kind to use a film that's dissolved and absorbed inside the mouth. The drug first received approval from the Food and Drug Administration (FDA) in 2015 following results from a phase 3 trial involving patients with chronic lower back pain.

Looking at BioDelivery's fourth-quarter 2019 financial results, demand for Belbuca seems quite strong. Net sales came in at $31.6 million, a 75% increase from Q4 2018. This is almost entirely from sales of Belbuca, which brought in $28.3 million in income for the quarter. Although the company is still reporting a net loss of around $15.3 million for the entire year, BioDelivery could easily turn a profit in 2020 if its growth rate stays strong, something that seems quite likely given that millions of Americans could find Belbuca a safer alternative to traditional opioids.

2 Small-Cap Biotech Stocks You Haven't Heard of, But Should Know About @themotleyfool #stocks $BDSI $TRIL Next Article
Current