The Brazilian fintech stock has seen double-digit sell-offs in August and September, but shares are still up 14.5% year to date.

Shares of PagSeguro Digital (PAGS -4.30%) climbed 10.2% in August, according to data from S&P Global Market Intelligence. The stock climbed in conjunction with momentum for the broader market and appears to have gotten a boost from a new partnership with a popular social media platform and a fresh acquisition. 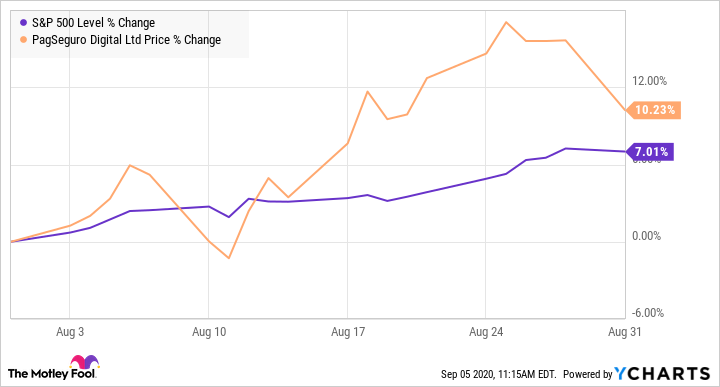 PagSeguro published second-quarter results on Aug. 7, posting sales and earnings that both came in below the market's targets. The company recorded adjusted earnings per share of $0.16 on revenue of $243.33 million, while the average analyst target had called for per-share earnings of $0.17 on sales of $252.72 million. Total payment volume conducted across PagSeguro's platform rose 11.4% year over year to reach 29.8 billion Brazilian reais ($5.6 billion). But revenue fell 2.3% year over year, and adjusted net income for the June quarter fell 10.4%.

The company added 299,000 new merchant customers in the quarter, and its customer count increased 1.1 million over the 12-month period. Management said that the company posted its highest-ever growth in July and continued to see strong performance in August.

PagSeguro stock has continued to slide in September's trading. The company's share price is down 10.7% in the month so far. 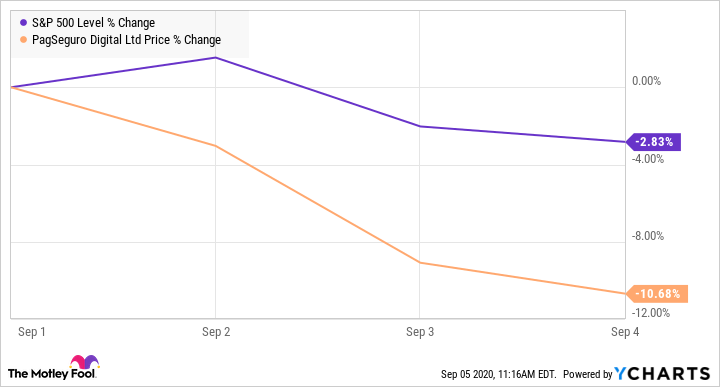 PagSeguro now has a market capitalization of roughly $12.9 billion and trades at approximately 39 times this year's expected earnings.

The long-term growth outlook for payment processing services in the Brazilian market and elsewhere in Latin America remains promising. PagSeguro isn't the only player in the space, with notable regional competitors including StoneCo and Nubank, but the market for fintech services in Latin American countries is young, growing at a rapid clip, and should be able to support multiple winners.