Please ensure Javascript is enabled for purposes of website accessibility
Log In Help Join The Motley Fool
Free Article Join Over 1 Million Premium Members And Get More In-Depth Stock Guidance and Research
By Daniel Foelber – Updated Sep 11, 2020 at 11:31AM

This oil major may be in trouble.

Oil titan ExxonMobil (XOM -3.00%), remains one of the few oil majors that hasn't cut its dividend this year. But this accomplishment is more due to Exxon being stubborn than it is to Exxon outperforming its competitors.

Exxon's COVID-19-related first- and second-quarter losses were its first quarterly losses in decades. And with West Texas Intermediate (WTI) crude oil prices now below $40 a barrel, Exxon's dividend -- which yields over 9% -- may be in trouble. 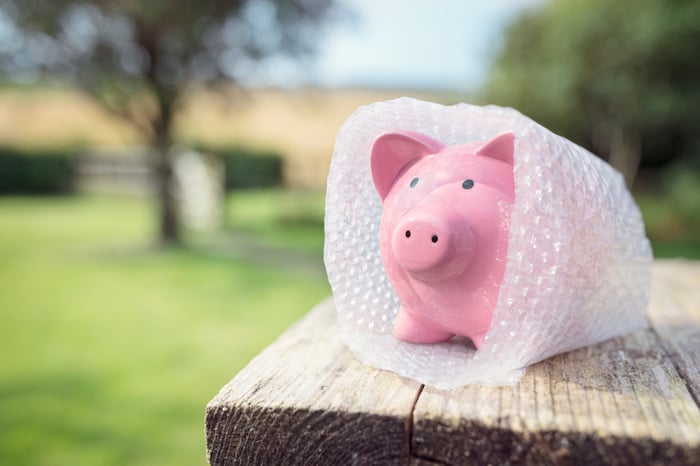 Exxon has had a rough go of it over the last few months. The company was once considered a blue chip darling of the Dow Jones Industrial Average (DJIA) before being removed from the Dow after nearly 100 years. Exxon was replaced by tech giant Salesforce.com at the end of August as the index adjusted to better reflect the modern economy.

Meanwhile, shares of Exxon are down 45% year to date, underperforming the market and the broader energy sector as a whole.

While Exxon's exclusion from the DJIA may sting the company's pride, a much more pressing matter is the lack of cash that's flowing in to fund its dividend. Now that Royal Dutch Shell cut its dividend, Exxon's spending and its dividend obligation are the largest of all oil majors.

Before the pandemic, Exxon was planning on averaging $30 billion to $35 billion in annual capital expenditures over the next five years and $33 billion in 2020. It has since decreased estimated 2020 expenditures to $23 billion, which it's on track to hit after notching $12.47 billion in capital and exploration expenditures in the first half of this year. Aside from this spending, Exxon paid $7.43 billion in dividends, but only brought in $6.27 billion of cash flow from operating activities in the first half of this year. Inadequate cash flow has pressured Exxon to raise debt at the expense of its balance sheet. 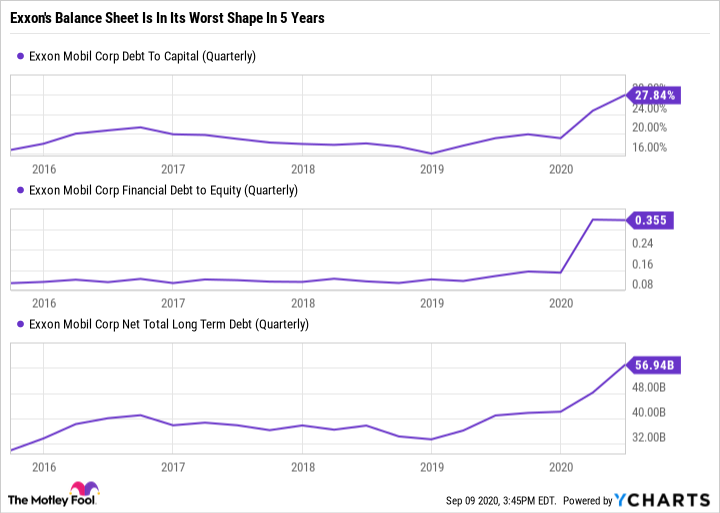 Financial metrics like debt to capital, debt to equity, and total net long-term debt are all on the rise, indicating that Exxon's balance sheet is now in its worst shape in five years.

As much as ExxonMobil would like to preserve its dividend, the reality is that lower oil prices and refining margins are pressuring the company to either take on more debt or cut its dividend. Both outcomes are unfavorable.

Often overlooked is the sheer size and impact of Exxon's refining business. Lower demand for transportation fuels like gasoline, diesel, and jet fuel plunged Exxon's refining margins to 50% below 10-year lows, which reduced earnings by $600 million in Exxon's second quarter. That impact was nearly enough to offset the $800 million in savings Exxon generated across its business. This goes to show that there's only so much Exxon can do to limit its losses when much of its business is based on elements outside of its control.

What is in Exxon's control is its dividend. Although a dividend cut would end Exxon's 37-year streak of consecutive dividend raises and strip it of its status as a Dividend Aristocrat, it's really one of the few remaining options Exxon has left aside from taking on more debt, selling more assets, of laying off some of its workforce.

It's understandable that Exxon's balance sheet would take a hit from the effects of the COVID-19 pandemic. But until Exxon can prove it can generate enough cash to cover its spending and its dividend obligation, the company's stock seems too risky to invest in at this time. Investors would probably be better off with other top oil stocks instead.