The company's wild year doesn't make up for its long-standing issues.

Thanks to its leading coronavirus vaccine candidate, Moderna (MRNA 0.48%) is one of the most-watched stocks of 2020. Its year-to-date growth eclipsed 360% in July -- though it's since pulled back to about 187% -- and the company has also won a total of $2.5 billion in government funding for its vaccine project. Given its present trajectory, why would anyone commit to never owning Moderna's stock?

In my view, there's no single deal-breaking reason to avoid Moderna, but there are quite a few critical issues which in aggregate make the stock too risky for me to own. 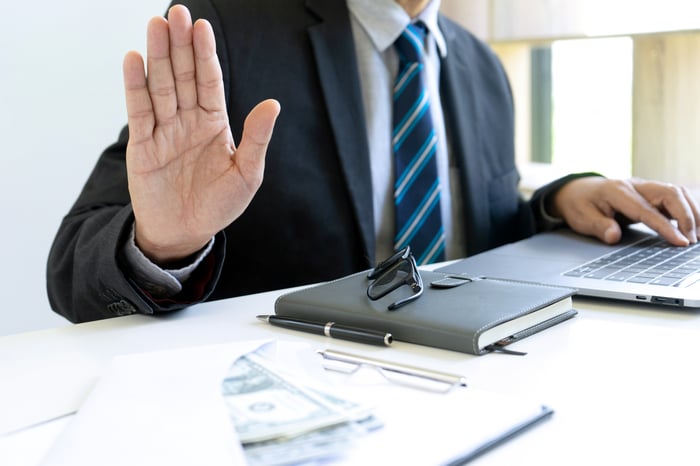 Moderna's coronavirus vaccine program is far from perfect, and it has a slew of red flags that investors should be aware of. The company has not produced any inoculations or therapies in its lifetime -- in fact, it's gotten nowhere close until now. And the science behind Moderna's coronavirus vaccine has never been proven to work for any disease or condition before, so the company can't lean on findings from prior successes to support its efforts. To make matters worse, executives have been divesting their shares at a steady pace, inviting scrutiny from the press regarding insider trading.

There are also a handful of issues concerning Moderna's relationship with the scientific community, and therefore its investors. The company has been notorious since at least 2016 for keeping its data disclosures and research publications as limited as possible, leading the Nature Biotechnology journal's editorial board to compare it to massively deceptive biotech flops like Theranos.

More recently, after the company reported positive results regarding its coronavirus vaccine candidate in May, infectious disease experts were quick to point out that Moderna hadn't actually disclosed its raw data sets. Instead, Moderna had only released summarized findings in the context of a press release, thereby preventing deeper scrutiny of the company's clinical trial progress.

This leaves investors to wonder whether the company is trying to hide problems with its highly hyped vaccine project or its vaccine delivery platform. Leaving such a question unresolved is another major red flag from my perspective, especially because excessive secrecy appears to be an enduring trait of the company.

It's trading at potentially unsustainable heights

This company has a history of secrecy and lacks a proven track record in vaccine development, and on top of all that, I just don't think the stock is a good bargain. The biotech industry's average price-to-sales (PS) ratio is 6.9, meaning we'd expect a stock trading at about $7 to have an average of about $1 in sales revenue per share. If a stock in the industry is trading for only $5 with the same $1 in sales per share, it might be a bargain, but if it's trading for significantly higher than $7, it might be overvalued.

In Moderna's case, the trailing price to sales ratio is 207. Thus, the stock is very expensive compared against the amount of sales revenue commanded by each share. Though the price-to-sales ratio isn't the only factor that investors should use to evaluate a stock, it's one sign that value-conscious investors shouldn't ignore, and for me it suggests that this stock is too hot to touch.

I missed the boat

The No. 1 reason I'll never own Moderna stock is that I missed my chance to buy it when it was cheap and its coronavirus vaccine project was just getting off the ground. Even in late March, after the company had announced its vaccine candidate, the stock was still around $30 -- a price that appeared speculative to me because the company had no earnings.

This was my mistake. Anyone who purchased Moderna at that time could have tripled their money by holding it and selling during its peak in mid-July. I don't think that there will be a similar opportunity again, now that the company is a household name.

Nonetheless, I think that there is still a chance for the stock to rise quite a bit, if the company's coronavirus vaccine is approved for sale. On the other hand, between missing my chance to invest, its seemingly inflated price, and the handful of red flags I've identified, I'm willing to call it quits with the idea of buying Moderna.