Please ensure Javascript is enabled for purposes of website accessibility
Log In Help Join The Motley Fool
Free Article Join Over 1 Million Premium Members And Get More In-Depth Stock Guidance and Research
By Selena Maranjian - Sep 14, 2020 at 6:45AM

Read on to see what's growing at 250% and what Snoop Dogg has to do with Robinhood.

Have you heard of Robinhood? (And no, I don't mean Robin Hood, who stole from the rich to give to the poor.) Have you been wondering what Robinhood is, and what all the fuss about it is? Even if you are familiar with it, you'll likely be surprised by some of the facts about it below.

Here's a little background: Robinhood Financial is a relatively new stock-trading platform that's making it easy for lots of people to invest, especially on smartphones. (Not that investing in stocks was that difficult before it -- as many good brokerages are charging $0 for trades these days.) It was established in 2012 by Baiju Bhatt and Vladimir Tenev, who had been classmates and roommates at Stanford. 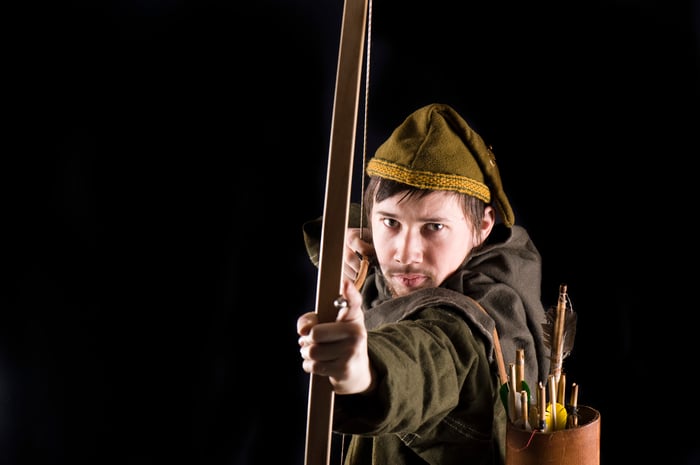 Here are some eye-opening numbers about the company.

In August, the privately held company received its third round of financing within just a few months -- this one a $200 million cash infusion that valued the company at $11.2 billion. To put that in context, at the time of this writing, that's steeper than the market values of Wendy's, Alaska Air, and Rite Aid -- combined. In the financial arena, it's about a quarter of the recent market cap of Schwab and nearly the size of E*Trade Financial.

The previous round of financing for Robinhood, $320 million, occurred just a month earlier, in July, when the company was valued at $8.2 billion. That's a 30% increase in its value in just a month! (All these investors pouring money into the company are likely going to want to cash out at some point, so there is plenty of speculation that the company will go public within a year or two.)

Robinhood has received a total of $1.7 billion in funding, according to the folks at Crunchbase who monitor such things. Investors include venture capital names such as Sequoia Capital, Institutional Venture Partners, and D1 Capital Partners.

The company has certainly had great success raising money from investors, but it hasn't always been that way. In an interview, co-founder Vladimir Tenev noted that "We probably knocked on 75 doors before we actually made it work." This is not uncommon in the start-up world -- determination and tenacity are required. "There were a lot of people who didn't believe in it, and we had to bang down a ton of doors. We were really relentless."

You're probably sensing that Robinhood is big. Here's an idea of how big: It recently noted that its podcast has nearly two million monthly active listeners, and its weekly newsletter has more than 20 million subscribers. 20 million, in context, is more than the entire population of New York state, including New York City and every rural and suburban town, and almost as much as the entire population of Florida.

No company is perfectly satisfactory in every regard, though some are more or less perfect than others. A report from the folks at Bloomberg recently cited 473 complaints about Robinhood filed with the Federal Trade Commission from January to mid-July. For context, that's far more than the 126 complaints about Schwab and 69 about Fidelity filed in the same period. Meanwhile, at the time of this writing, the Better Business Bureau listed 670 complaints against the company, though some were noted as having been resolved.

What are people complaining about? Well, the company has experienced various glitches. One permitted its customers to invest on margin (i.e., with borrowed funds) to an almost infinite degree, with one user noting in a public forum that he had $4,000 in his account, but had been able to establish a $1 million position in a security. Another glitch reversed the directions of options traded, giving customers the opposite result than that desired. And in March, the platform was shut down on a particularly volatile day when many investors would have wanted to get in or out of various stocks, but were unable to. You may not be surprised to hear of investigations into Robinhood by the likes of the Securities and Exchange Commission (SEC).

Among early investors in Robinhood are rappers Snoop Dogg and Nas and actor Jared Leto. Jay-Z's Roc Nation is another early investor.

So how many customers are trading using Robinhood accounts? The company celebrated 10 million users in late 2019, and more recently is reported to have added three million additional accounts in the first quarter of the year.

The average age of a Robinhood customer is reportedly 31. That's pretty young.

Another thing besides the age of its investors that distinguishes Robinhood is how they're investing. A July New York Times article noted: "In the first three months of 2020, Robinhood users traded nine times as many shares as E*Trade customers, and 40 times as many shares as Charles Schwab customers, per dollar in the average customer account in the most recent quarter. They also bought and sold 88 times as many risky options contracts as Schwab customers, relative to the average account size, according to the analysis." They're trading frequently, which is rarely a great way to build wealth, and are employing risky options strategies, too. Robinhood even offers access to cryptocurrency trading, which the SEC has warned investors against. There's a conflict of interest at work here, too, as the company makes more money when customers trade more, and trade in riskier things such as options.

If you think that Robinhood needs to teach its users how to invest in a rational manner, know that it does have an education nook on its site, and recently reported that "average unique daily visits to our Learn resources are up more than 250% since January" and "We've published more than 650 articles on Learn..." That's a huge increase, but it's not clear whether it reflects a rise from 100 visits to 350 visits or 1 million visits to 3.5 million. Such details matter.

All these interesting details are just the tip of the iceberg. If you're interested in Robinhood, and especially if you're considering being a customer, take a closer look at it. It offers great potential for good, helping young people in particular start saving and investing at an early age, though it can also be counterproductive, if many of those folks are not investing in sound and effective ways.