Please ensure Javascript is enabled for purposes of website accessibility
Log In Help Join The Motley Fool
Free Article Join Over 1 Million Premium Members And Get More In-Depth Stock Guidance and Research
By Harsh Chauhan – Sep 16, 2020 at 10:56AM

The e-commerce giant is upgrading its infrastructure ahead of the lucrative festive season.

Amazon (AMZN 4.50%) is facing the heat in India from local player Reliance Retail, which has been rapidly expanding its online and offline presence to take a bigger bite out of the country's retail space.

Reliance Retail recently announced that it is buying the retail and wholesale assets of Future Group in a deal worth $3.4 billion, a move that would give the Mukesh Ambani-led conglomerate access to the latter's 2,000 retail stores spread across 400 cities and towns. This deal is going to augment Reliance's existing retail footprint in the country, which in turn is supporting the rapid growth of the company's JioMart e-commerce venture.

Amazon, however, has decided to pull up its socks to counter Reliance's growing threat in the Indian market. Let's see how. 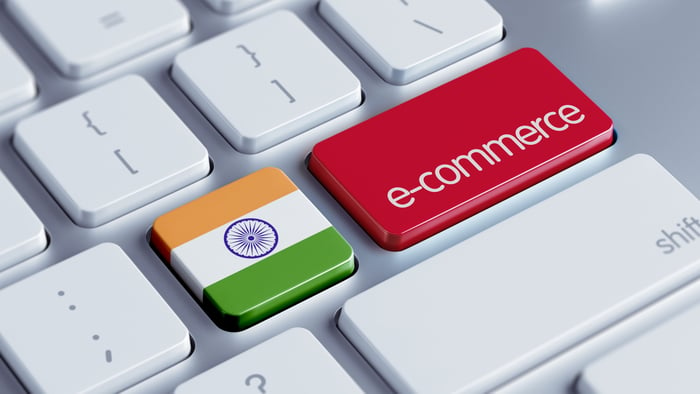 Amazon is ramping up its infrastructure in India

Amazon recently announced that it is expanding its sorting center network in India before the arrival of the festive season. The e-commerce giant will be deploying five more sorting centers across the country, and expanding eight of its existing sorting centers, taking its overall sorting area in India to 2.2 million square feet spread across 19 states.

As the name suggests, sorting centers are used for sorting packages based on where they have to be sent and the mode of transportation. Amazon says that the expanded network will help the company increase delivery speeds, a move that should enhance the customer experience and tackle any additional load that the company's logistics network might face during the festive season. Last year, the festive month of October reportedly generated $6 billion in sales for e-tailers in India.

Amazon already has customers in 100% of the serviceable pin codes in India. So it makes sense for the company to reach its customers faster, as that's one way to remain competitive against the growing threat of Reliance Retail and capture a bigger piece of the festive season sales this year.

Reliance Retail's e-commerce platform JioMart has reportedly been fulfilling more than 400,000 orders a day. The JioMart app has been installed more than 5 million times on the Alphabet's Google Play store as Reliance has turned the heat on its rivals by enhancing the minimum discount from 5% to 7%.

Reliance's JioMart e-commerce platform is currently focusing on the grocery space. But Reliance plans to add other categories such as fashion, electronics, pharmaceuticals, and healthcare as well. Given Reliance's vast network of physical stores in the country, it could quickly scale up its presence in those areas like it did in the grocery space.

However, Amazon has a few advantages over Reliance Retail's JioMart that could help it stay ahead of the latter in the competitive Indian e-commerce market.

Reliance is going up against an ecosystem

Amazon has built up an ecosystem of various services in India over the years that are mostly included under the Prime membership service. The Prime membership program can be bought for an annual subscription fee of 999 rupees (roughly $13.60), or a monthly subscription fee of 129 rupees ($1.75). This program gives members access to a host of services such as video and music streaming, early access to deals, eBooks, faster delivery options, and even a credit card.

These offerings have made the Prime subscription service popular in India. Third-party estimates suggest that Amazon has 10 million Prime members in India. More importantly, Amazon saw twice as many customers get Prime memberships during its two-day shopping festival in India last month as it did in the prior-year period.

So it appears that Amazon has been able to attract new users of late, despite Reliance's entry into the e-commerce space in India. And because the company has already built a nice ecosystem of users thanks to the Prime platform, it is in a good position to take on the challenge posed by Reliance Retail. After all, Amazon has already built a huge network in India and is now working to improve it, a strategy that should help it make a strong showing in that lucrative retail market.