Video calling has become utterly critical in 2020 due to the COVID-19 outbreak. The public health crisis has fundamentally altered how people communicate both personally and professionally. Zoom Video Communications (NASDAQ:ZM) has been the most visible winner of that secular shift, which has attracted competition from tech companies that had only previously dabbled in the space. That includes heavyweights like Facebook (NASDAQ:FB) and Alphabet (NASDAQ:GOOG) (NASDAQ:GOOGL) subsidiary Google.

Zoom has been pushing deeper into hardware, but mostly through integrations with third-party devices -- including Facebook Portals and Google Nest Hubs -- as opposed to making its own gear. Google has now decided to do just that. 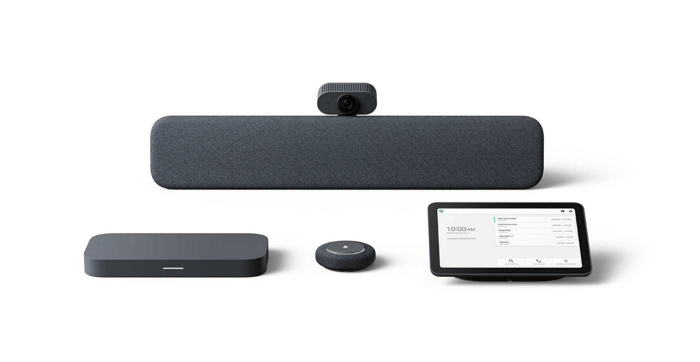 Hardware for the enterprise

This week, the search tech giant announced a new lineup of hardware for its Google Meet videoconferencing service called Series One, which will include a whole kit to set up a meeting room for videoconferencing. Google is partnering with hardware manufacturer Lenovo to produce the gear.

The kit includes a smart camera that can automatically track subjects and frame the video call to include all participants, a smart audio bar, a microphone pod, and a touchscreen control display. There's also a small tower with processing hardware like an Intel i7 chip and Coral Accelerator Modules with Google Edge TPUs (tensor processing units) that specialize in artificial intelligence (AI).

Series One kits are decidedly not intended for regular consumers. The hardware is designed for businesses that are trying to set up videoconferencing in meeting rooms. Pricing ranges from around $2,700 for a small room setup and reaches up to $4,000 for larger spaces. Google already offers various other videoconferencing kits made by other manufacturers like Logitech and ASUS, but Series One is a co-branded first-party offering.

The war rages on

The video-calling war continues to intensify as companies scramble to meet the rapidly expanding market. Facebook has been trying to sell its Portal hardware to the enterprise over the past year or so, integrating it with Facebook's Workplace service. The social networking company also unbundled Messenger on the desktop earlier this year in order to make it more accessible on the consumer front.

Zoom is using a few different strategies as part of an overarching hardware-as-a-service model, including Zoom Rooms and Zoom for Home. Zoom Rooms similarly offers kits made by third-party manufacturers, whereas Zoom for Home leverages the aforementioned consumer gadgets to facilitate remote work through devices that people may have already purchased for personal use.

Given that the trend of remote work is expected to persist even after an effective coronavirus vaccine is developed, demand for video-calling services and hardware isn't going away anytime soon.