Please ensure Javascript is enabled for purposes of website accessibility
Log In Help Join The Motley Fool
Free Article Join Over 1 Million Premium Members And Get More In-Depth Stock Guidance and Research
By Evan Niu, CFA – Aug 20, 2020 at 9:00AM

The videoconferencing service will soon be available on the most popular smart displays on the market.

To its credit, Zoom Video Communications (ZM -1.50%) has already done the hard part: Becoming a household verb. "I'll Zoom you in a little bit" has become part of the daily lexicon for millions of people video-calling in personal and professional contexts, even if they're not using the actual Zoom service. Turning into a genericized trademark that is ubiquitous among consumers is a coveted achievement among brands.

The next step is to ensure that Zoom's service is available everywhere to capitalize on that brand recognition. 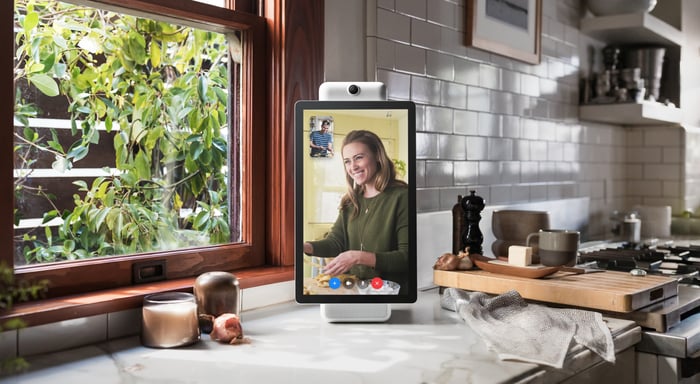 Zoom will soon be available on Portal+. Image source: Facebook.

You've heard of these manufacturers

Yesterday, Zoom announced a major expansion of its Zoom for Home program, in which the company licenses its platform out to integrate with third-party hardware. The first Zoom for Home product was announced last month, a 27-inch touchscreen device made by a manufacturer that you've probably never heard of (DTEN).

This time around, Zoom has scored partnerships with the biggest tech behemoths on the planet: Facebook (META -2.88%), Amazon.com (AMZN 1.20%), and Alphabet's (GOOG -0.36%) (GOOGL -0.58%) Google. All three of those companies offer smart displays -- Portal, Echo Show, and Nest Hub Max, respectively -- that are capable of making video calls. Portal will get Zoom integration as early as next month, with the Echo Show and Nest Hub Max expected to gain support for the service by year-end.

Zoom notes that the number of adults working exclusively at home has tripled during the coronavirus outbreak, citing a Morning Consult study. A third of those respondents are interested in upgrading their setup but only if their company helped cover the cost. The Zoom for Home program hopes to leverage gadgets that consumers may have already bought for personal use.

Smart displays have emerged as a derivative category of smart speakers in recent years, oftentimes accounting for approximately 20% of smart speaker unit volumes. Demand for smart displays is booming thanks to the additional functionalities available compared to products without a touchscreen. The partnerships will help Zoom piggyback on the category's growth. Users will soon be able to say, "I'll Zoom you on my Nest."

In no uncertain terms, this is a huge win for Zoom, which has become a market darling this year due to the COVID-19 pandemic.

With most tech companies increasingly eyeing the market for video-calling and videoconferencing solutions, you might find it peculiar that Facebook, Amazon, and Google would be open to letting Zoom on their hardware. After all, it's only been a few months since Facebook unbundled its Messenger video-calling service on desktop platforms in an apparent effort to take a bite out of Zoom's popularity. For the most part, the tech juggernauts have only supported their own proprietary video-calling services on their own hardware, with limited collaboration among the companies.

But you might just so happen to recall that ginormous tech companies are under intense antitrust scrutiny from lawmakers and regulators the world over related to concerns that they undermine competition through various business practices. The hulking giants now seem a bit more open to competition. Funny how that works!