The consumer market for video-calling devices that may be potential privacy violations waiting to happen might not be all that big. Facebook (NASDAQ:FB) refreshed its lineup of Portal devices last month as part of its ongoing efforts to build a hardware business, despite widespread privacy concerns around the first-generation Portals. The social networking juggernaut is now looking to broaden the appeal of its Portal products. 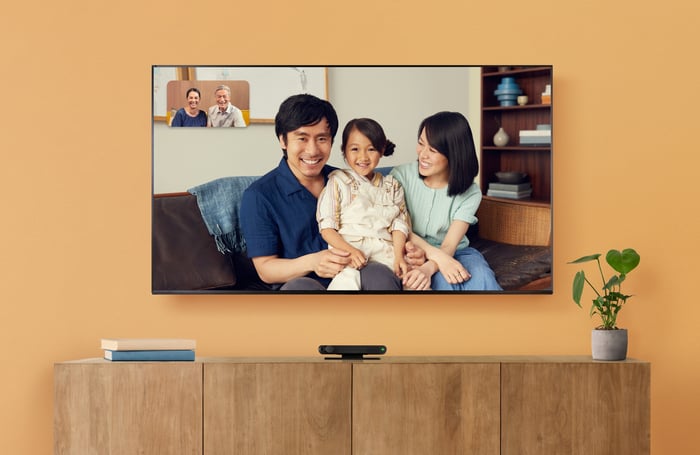 At Facebook's Flow conference for business leaders this week, the company announced that Portal will soon work with Workplace, the enterprise collaboration platform that the company launched back in 2016. Facebook is adding features such as live video captions and the company's Smart Camera technology, which intelligently tracks a speaker around a room. Many enterprise videoconferencing incumbents like Cisco offer similar technology.

Videoconferencing specialist Zoom Video Communications (NASDAQ:ZM) went public earlier this year to much investor fanfare, with shares nearly doubling relative to the IPO price. In its prospectus, Zoom projects its total addressable market opportunity is over $43 billion, citing IDC estimates on the parts of the unified communications and collaboration market that it plays in. Zoom's revenue soared 118% last fiscal year, underscoring the growth potential that Facebook now wants a piece of.

Zoom also notes that some of its customers use Workplace integrations while acknowledging that Facebook represents a competitive threat since it has "in the past and may in the future also make investments in video communications tools."

Of course, another elephant in the room is Microsoft, which offers a comprehensive suite of collaboration tools including Teams and Skype. Workplace remains a relatively niche player in enterprise collaboration, with just 3 million paid users, according to CNBC. Facebook had said in February that Workplace, which is priced very aggressively, had grown to 2 million paid users.

Consumer hardware, which would also include its Oculus subsidiary, remains a tiny part of Facebook's overall business. That revenue is nested in the company's "payments and other fees" segment. "Our other fees revenue consists primarily of revenue from the delivery of consumer hardware devices, as well as revenue from various other sources," the company states in regulatory filings.

Payments and other fees revenue jumped 36% last quarter to $262 million, representing just 1.6% of total revenue. Still, the company has grand hardware ambitions for the future: It confirmed a year ago that it was developing an augmented reality headset. Facebook isn't done making hardware -- not by a long shot.